Into the Fog:
On the Last Shot of Chantal Akerman’s News from Home
By Eric Hynes

I didn’t know about Chantal Akerman’s News from Home (1976) until I was deep into my twenties, yet I’d been preoccupied by what she captures in its final shot from as far back as I could remember. Akerman’s presentation of New York in that movie is so specific and personal—fifty or so shots of the city accompanied by her own voice-over recitations of letters sent from her mother back in Brussels—that it’s less a universalizing force than an engine engendering responses that are equally specific and personal. Every shot in News from Home is and feels placed, transforming the camera from a receptor, a capturer, into a physical and mechanical extension of the filmmaker. It tries to make us see what she sees, and more crucially to make us feel something of what she feels. Not through performances or reaction shots, which film has long offered by way of emotional and psychological representation, but through the action of seeing. Instead of dissociating from camera, Akerman becomes it. What she sees is what I see—technically and substantively. And as the Staten Island Ferry pulls away from Manhattan, her recording is indistinguishable from my own memory.

The shot begins with lights dimly alighting a dark tunnel, pulling back to the towering, frame-filling, wood-pylon walls of a boat slip. A rusted, sea-foam green structure appears in the background, and behind them a hint of skyscrapers. The boat lists left, offering a greater vantage of what’s at right—the Brooklyn Bridge—before advancing further from the shore and giving a clear view of the departed slip, which, now fully apprehended, somehow seems to retreat more rapidly. It’s a shot that transpires entirely without voiceover, and its accompanying sound of waves lessens and retreats as well, reduced to a gentle splashing against the boat, less obviously recorded on scene than subjectively, dreamily applied. More of the city starts coming into view, the swing of the boat tracking a sweep from right to left to incorporate one building after another, still close enough to offer space and depth between and among them, the somewhat foggy sky giving buildings in the background a lighter shade of grey than the ones in the foreground. Now the journey is nearly directly backwards, with more buildings entering at both sides of the frame. They appear, they fill the frame, and then they shrink. Actually they’ve only ever been shrinking. Slowly, gradually retreating before they even appear. Seeing Battery Park, leaving Battery Park, losing Battery Park. Seagulls trail behind, flying above the ferry’s lengthening wake. Then the towers appear, just at left. Two towering facts in the sky, drawing the eye as something to hold onto, like tree stumps lassoed from quicksand. They’re nearer than the rest of the buildings, which have now bundled together into a single grayscale mass, suddenly and without mercy. Minutes pass, until the buildings and the sky and the water flatten and fade into a spectral rumor, the clouds absorbing the tops of towers and any uptown buildings vanished entirely from sight.

This is how I understood Manhattan, a.k.a. the City, while growing up on Staten Island. I don’t ever recall the approaching view of the island from the Staten Island Ferry, at least after the day ended (perhaps I savored the arrival while I was there, but more likely is that I was too stimulated and ecstatic for such reflection). It was the loss of the city that stayed with me. It was that long fade that I felt most deeply, that long, seemingly unblinking track backwards to a home that didn’t feel like where I belonged, away from a place that I could never earn or obtain, that presented itself as an exciting and scary maze that morphed into a quietly forbidding wall as I departed it.

While technically a part of the city, Staten Island was, and is, another world. What I desired, as well as feared, was on that rock to which I could dramatically arrive and depart by sea. Akerman was a Belgian filmmaker transplanted to New York when she made News from Home, yet she communicated something very close to exactly what I felt and continue to feel as a Staten Islander. Even after having lived within the confines of that shot, and having lived within stumbling distance of those towers, I still feel it. I think it’s because she felt deeply what it means to live in but never possess the city, and furthermore what it means to both live and find living elusive. Few filmmakers have ever been better able to articulate a sense of presence, and also of the present, with those famous long shots locating film and filmmaker physically and temporally. But like the skyline, by the time we come close to apprehending things, we’ve also lost them.

In News from Home, Akerman is neither here nor there, and that any of us can watch the film and understand this for every second and frame of it, is simply, actually miraculous. The tone of longing that’s established through the letters is countered by a sense of loss in the pictures. The film combines and overlays the two, but they certainly don’t connect. Rather one passes over the other, the longing of her mother separately, and indirectly, crossed by the longing of the images. We’re two places at once, and thus nowhere entirely. Perhaps some of us feel this less intensely than others. And perhaps those of us that do also feel differently about that final shot, and about that journey from one island to another. I just know that what it expresses is precisely what I feel as deeply as I feel anything: that the city is my ultimate intangible, real and metaphorical, the pinnacle of and ultimate metaphor for life, about which I feel the most intense, prevailing, and defining sense of romance, longing, and loss. The moment I think I understand and appreciate it, it’s already fading away. The camera stands here, shooting there, and is never fully present in either. It stands still and yet it moves over the water, and over time. What it records lasts for as long as it can, or for as long as it has to, or until it just stops. And in the end it’s as profoundly, beautifully, tragically unresolved as we are. 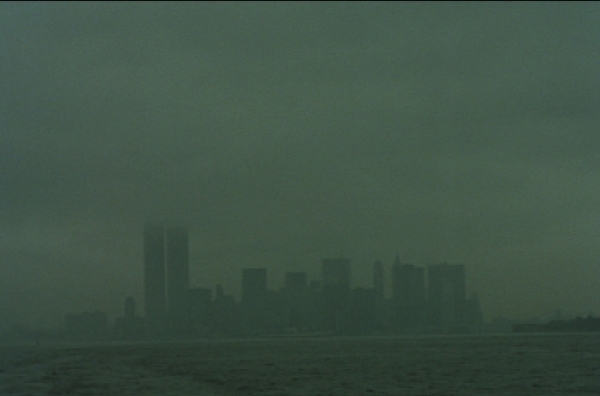