Now that the tiresome debates comparing the relative merits of contemporary American film and television have at least temporarily died down, let’s take a moment to admire the brilliantly cinematic television show that is Matthew Weiner’s Mad Men. For the first few years following its July 2007 premiere on the cable network AMC—just one month after The Sopranos, for which Weiner had served as a writer and producer, cut to black forever—the epic tale of Madison Avenue advertising creative Don Draper shone as a beacon of sophisticated, multi-layered, character-driven drama in a bleak landscape of squalid unscripted reality shows and by-the-book detective procedurals. In more recent years, once such brooding episodic hits as Breaking Bad and House of Cards arrived in its wake, it has seemed to fit in better with the general television population; although throughout the transition to what many have dubbed our new Golden Age of Television, Mad Men has, to these eyes, remained television’s most supple, consistently surprising series. Weiner’s show functions according to its own slightly askew internal logic, but it also expands out into the world. There’s nothing self-serving about Mad Men, and its commercial and critical success hasn’t led to any artistic compromise on Weiner’s part; one never gets the sense that he’s hungry for Monday morning Twitter chatter (formerly, “water-cooler conversation”) and that whatever surprises it occasionally springs on us emerge naturally from the show’s characters and scenarios. Always refusing to take the easy road to sensationalism, it combines the pleasures of televisual serial narrative with Hollywood classicism at its best.

So what is it that makes Mad Men the most movie-like of the wave of acclaimed, endlessly recapped and discussed television shows of the digital age, and why does this matter? Is it something in the deliberate pacing of the storytelling? The sumptuousness of the details and design? The way it manages to make larger-than-life icons out of the small people at its center? Perhaps it’s also because images of the era that it depicts truly linger in the popular American consciousness thanks to the movies, not television. The dramatic network series broadcast during most of the 1960s were largely escapist fare, such as episodic science-fiction, lawyer procedurals, and, most prominently, westerns: in 1960, when the first season of Mad Men takes place, the top three rated television shows were Gunsmoke, Wagon Train, and Have Gun Will Travel. For images at all reflective of a contemporary “reality,” however manufactured, viewers had to turn to the big screen. It makes sense, then, that Weiner asked his cast and crew to watch a group of specially selected movies, most of them made in the late fifties and early sixties, as inspiration, including Arthur Hiller’s The Americanization of Emily, Billy Wilder’s The Apartment, and Jean Negulesco’s The Best of Everything. These movies, with their similar milieu to Mad Men, clearly functioned as thematic inspiration, but on Weiner’s list there are also the more aesthetically rigorous selections of Alfred Hitchcock’s North by Northwest and Vertigo, and David Lynch’s Blue Velvet. The latter might at first appear the most surprising, but Mad Men, especially in its early seasons, seemed to owe a mild debt to Lynchian surrealism. For me, for the initial half of the first season, at least, before I was fully enveloped in its characters and the details of its elevated soap operatics, Mad Men functioned at a disturbing remove, as though I was not watching a story unfold as much I felt I had been dropped down into the middle of someone else’s dream. As in the best of Lynch, it felt like luxurious kind of alienation.

Much has been said of Weiner’s meticulous (or as one of the show’s directors, Alan Taylor, has called it, “maniacal”) attention to detail, the physical fruits of which can be seen at Museum of the Moving Image’s immaculate new exhibit. But what is the show’s slavish historical accuracy in aid of? Why do Weiner and his prop masters care as much about presenting an authentic, period-perfect chip ‘n’ dip as they do ensuring they have the exact commuter-train schedules from the time? The brilliance of the show’s aesthetic authenticity is that it’s a mask. There’s a central, important contradiction to the show, which is our ad-exec main character feels enormously, existentially detached from the materiality of everyday life—the very things, concepts, and ideas he is meant to be hawking (except, perhaps, for Hershey bars). This perhaps accounts for the odd emotional effect of Mad Men, the foregrounded artificiality of a show that is hardly “just” a period piece. It’s here that the show becomes Lynchian. When the Drapers go picnicking and leave their trash strewn about a public lawn in the season two episode “The Gold Violin,” director Andrew Bernstein leaves the camera rolling, fixed on the family’s waste, as they pack up the car in the background of the shot and drive off. The insistent stare of the camera helps the scene become more than a punchline about the bad manners of unenlightened earlier generations; this is an image that expresses a profound, almost spiritual carelessness that the show has already located in its characters. (It’s surely no accident that later in this episode the man whose wife has been sleeping with Don calls our hero “garbage.”)

There has been an uncommon care given to camera placement and movement since the show’s very first frame. The series opened with a seductive tracking shot that reads as the kind of moving-through-space flourish one expects to see on the big screen: the camera tracks left across a packed, elegantly period-Deco Manhattan bar, finally resting on the back of our handsome, still unseen hero’s head. It’s the same composition that caps off the opening credit sequence and would become the show’s taunting, teasing signature: what is really going on inside that pretty head, so obscured to us? Right from the top, Weiner has established that Mad Men will be about more than narrative motion: it will be explicitly about image-making.

Of course this aesthetic choice shouldn’t come as a surprise considering the show is literally about the creation of seductive images. This extends from the main character’s current profession to his hidden past. Don Draper has become such an iconic name that it’s easy to forget it’s not really his. Lest we forget, our man is Dick Whitman, an Illinois boy from an impoverished rural family whose prostitute mother died in childbirth and whose father was killed after being kicked in the face by a horse. He would later reinvent himself as that sleek advertising agency exec with the lusciously alliterative name, stolen off a corpse in the Korean War. The gradual revelation of the Draper/Whitman charade formed the suspenseful crux of the first season; the rest of the show remains haunted by it. (It should be added that the mistaken identity narrative owes a debt to North by Northwest, as does a remarkable, and in the course of the series sui generis, extreme high-angle shot of the city street outside Sterling Cooper’s office building.) 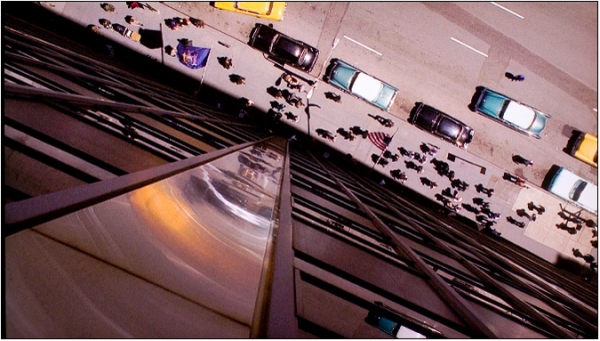 Perhaps the reason Mad Men has resonated so much is that despite the monolithic stature of the tormented man of granite at its center, the show has spread a great deal of its attention across a wide range of vividly created, beautifully acted characters that have matured and regressed, risen and fallen, as we’ve followed them over the past eight years: the once unflappable, ever crumbling Roger Sterling (John Slattery); the alternately imperious and fragile administrator turned partner Joan Holloway (Christina Hendricks); the stunted and bitter Betty Francis, formerly Mrs. Draper (January Jones); the weaselly, womanizing yet intermittently forward-thinking Pete Campbell (Vincent Kartheiser). It’s been said often that Elisabeth Moss’s Peggy Olson is the show’s stealth protagonist, and it’s a persuasive theory, even if she hasn’t been given as much screen time over the years as Don. Bay Ridge, Brooklyn’s own Peggy has gone from mousy secretary to head copywriter, and Moss has performed her with an exquisite mix of steely resolve and vulnerability. We might wish to view Peggy as the show’s true main character for three reasons: her character’s (and Moss’s) innate likability, the fact that we’ve charted her rise from the bottom, and that her ascendance—her emotional and physical transformation—perhaps more perfectly defines what we want out of a central identification point. Despite a constant stream of setbacks, Peggy is who we want to see ourselves as, while Don—an alcoholic, an insecure blowhard, a cheater, a liar—is who we hope we are not: a wheel-spinner, always ending up back in the same place. While the struggles of Peggy, a professional woman living in an unenlightened age, can often be chalked up to social realities, Don is largely a victim of his own making.

When we think back over all the years that Don Draper has been a part of our cultural consciousness, it’s usually his low points that stick in our minds: in season one’s “The Marriage of Figaro,” his beer-fueled disappearance during young daughter Sally’s birthday party, leading to the unforgettable image of Betty serving a neighbor’s half-defrosted Sara Lee cake in place of the one Don never picked up; his misguided extended affair with his daughter’s teacher, Miss Farrell, throughout season three, which culminated in his divorce from Betty, and then, in season four, his romantic rejection of Dr. Faye, his emotional, professional, and intellectual equal, in favor of a doomed marriage to his secretary, Megan; throwing money in Peggy’s face after she makes a mild complaint in season five’s “The Other Woman,” leading to her quitting; being caught with his pants down by Sally at a neighbor’s apartment in season six’s “Favors.” Because of all this he has been labeled an antihero, but all of his blunders and bad deeds have only served to make his gradual spiritual reclamation all the more satisfying. Tony’s evils were far too great for the last season of The Sopranos to be anything more than a slow march toward death; however, we hold out hope for Don, the man whose greatest gift was self-reinvention. The end of season six, when Don finally reveals the truth about his past to his children, was the most rewarding moment of the series, pointing—or will it turn out to be teasing?—toward ultimate redemption.

Effectively and appropriately, Don Draper is the kind of character who has the dimensions of a movie icon but has been cruelly made small—all the better to fully examine him in close-up on our television screens. We have seen him morph from fresh-faced and slender to worn and paunchy, yet Hamm always remains vivid, dramatic, and beautiful. It’s to this character that the show always delivers its most cinematic strokes—its close-ups, its slow-motion, its psychologically acute expressionistic flourishes. In the first season, after abandoning his daughter during her birthday, we see him parked in a vacant garage, staring out the windshield. His face is caressed by tendrils of elegantly lit, noirish cigarette smoke. Then we see him from a distance, still sitting in the driver’s seat, but in a long shot, the red railroad-crossing lights warning of an approaching train blinking in the extreme foreground, out of focus. There’s a nearly Sirkian tragic symbolism to the composition, powerful enough to make categories like cinema and television all but moot. 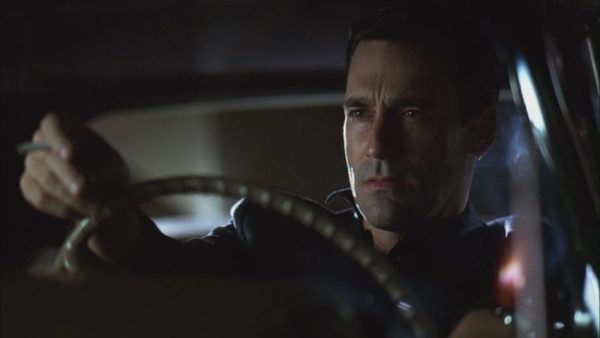