Me and You and Everyone We Know / L.A. Story 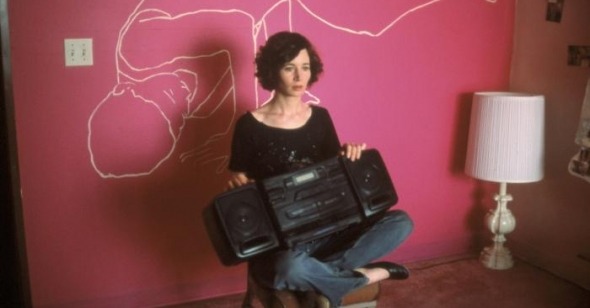 Running in Place
David Ehrlich on Me and You and Everyone We Know and L.A. Story

Karl Marx said that “History repeats itself first as tragedy, then as farce,” but Karl Marx didn’t know shit about the current state of our indie movies—I mean, the guy never even saw Juno. In fact, when taking the pulse of the ouroboros known as Hollywood, it would appear as if Marx had it backwards. Our native cinema repeats itself first as funny, then as sad, a dynamic epitomized by the consistent and comprehensive extent to which the indie film of today processes the shame of the middlebrow film of yesterday.

Consider the decisively narrow chasm between Mick Jackson’s star-studded 1991 Steve Martin comedy L.A. Story and Miranda July’s precious 2005 drama Me and You and Everyone Know. The former is a commercially viable film that plays like the lovechild of Woody Allen and Terry Gilliam (as fostered by Jacques Tati), the latter an affected indie that seems to have sprung from the mind of a hipster imprisoned in a music box, and yet to watch them both in short succession is practically responsive viewing. July’s film feels less like a reimagining of L.A. Story than it does an update, the relationship between the two akin to that shared between consecutive installments of Michael Apted’s Up series.

It can be difficult to identify, but almost every film in which Los Angeles plays itself features a moment wherein it’s suggested to the audience that the movie is actually set in Hell. Mick Jackson—perhaps bedeviled by the whimsical and ultimately magnanimous satire of his earlier L.A. Story—compensated for that confusion with 1997’s Volcano, in which fire and brimstone literally erupt from the streets of Beverly Hills. Actually, the trajectory of Jackson’s output seems rather backwards, as L.A. Story unspools like a satire of some prior apocalypse, or at the very least a deranged dystopia that’s playing out in the wake of a kind of extinction event. It’s made abundantly clear in the adventures of Steve Martin’s affable weatherman (or is that meteorologist?) Harris K. Telemacher that Hell might be other people, but you’re still there on your own. A woman takes a class in the art of conversation and emerges with nothing to say; Sarah Jessica Parker’s bouncy teen sexpot dreams of being a spokesmodel because she’s “always loved pointing at things”; and Telemacher can’t order the duck at the trendiest restaurant in town (L’Idiot) because he doesn’t summer anywhere. People are struggling to connect in a world that has complicated human interaction to the point of nonsense, relentlessly moving forward so as not to confront the fact that they’re stuck.

One particularly cacophonous lunch finds Haggis (Paul Haggis, that is) on the menu, as a woman admits that she met her police officer boyfriend by smashing into him with her car. As a casual highway shootout sequence makes abundantly clear, it’s practically Thunderdome out there—they’ve just swapped out the crossbows for colonics. The city’s residents have codified their culture into oblivion, and that the search for unified meaning has isolated them all.

In fact, perhaps L.A. Story is only relatable because it’s ultimately just a swarm of signifiers in search of a fairy tale. This is a movie in which a literal street sign is one of the most important characters (it’s a nameless electronic marquee on the side of the freeway, but, in a moment of sly diction, Martin refers to it as “L.A.”). The towering oracle presides over a film that’s human in form but not feeling, as Martin’s pivotal romance with Victoria Tennant—his wife at the time—ironically fails to connect with the viewer at any level. Jackson borrows Tati’s visual acumen and playfully dense framing, but ignores the relentless commotion that sustains the Gallic master’s films as symphonies rather than series of monologues.

But the iconography works. Jackson’s dystopian portrait has about as much use for subtlety as Béla Tarr does for Technicolor, and while the sight gag that opens the film is singularly highbrow, it’s an appropriately overt introduction to any L.A. story. Federico Fellini’s La Dolce vita, begins with a helicopter mordantly lugging a giant statue of Jesus Christ over the outskirts of Rome: L.A. Story replaces the Son of God with an enormous hotdog. It’s a brazen swipe at the lowest common denominator and a shamelessly broad indictment of the culture Jackson is preparing to dissemble, but Christ’s absence sets an ironic pall over the feathery film that follows. If a Hollywood product like L.A. Story is invariably motivated by the wants of its characters, and its characters are trapped in Hell, it stands to reason that Jackson’s film is ultimately about the latent desire for resurrection. And yet gone is the star of the most famous resurrection saga ever told, as if any imagery has been censored that might remind L.A.’s citizens that they’re on a track and not a treadmill.

Modern films have made a habit of mocking modern art, and both L.A. Story and Me and You and Everyone We Know exploit the same milieu to scoff at the oppressive arbitrariness of value—it’s just the perspective that’s changed. Telemacher first rebels against this idea by repurposing the city’s most revered museum as his personal roller-rink. When he critiques a particular artwork he does so directly into the camera’s lens, concluding that those who see the piece might pretend to be shocked, but that this is the kind of thing that makes him “emotionally erect.” The gag is that the painting he’s discussing is eventually revealed to be an inscrutable red canvas, but the reveal feels secondary to the gaze. It’s confrontational stuff, the void staring back and whatnot. It’s among mainstream cinema’s most brazenly Brechtian moments.

July recasts the same scene in a local gallery, as the curator finds a burger wrapper on the floor of an installation she’s hosting, and marvels at how the artist always includes some “real things” in his exhibit. The audience is conditioned to expect the joke to be that the wrapper is just a bit of wayward trash, but July caps the bit with an impish and sardonic final twist, yanking the artist into the frame to proudly assure the audience that the wrapper was indeed intentional. The same thing we once laughed about in ourselves we’re now enabled to mock in others—the genius of the sequence is that July invites her viewers to judge only to then snatch away the gavel. July intends for her characters and gags to be translucent rather then reflective—the people in her film would never dare acknowledge the camera, as their very existence is dependent upon their capacity to be seen rather than see.

It’s telling that July kicks things off with a moment in which things are too pellucid for parody. We’re introduced to John Hawkes as a family man about to lose his family. He spies a bird in a tree through the kitchen window of his Van Nuys home, and admires the animal as if it’s perched in another dimension, something Hawkes can see but not touch. His ex-wife, busy packing up her belongings, hands Hawkes a framed photograph of a similar bird, as if he’ll have to settle for simulacrums. He’ll end the film having finally permeated that infernal window, placing that picture in the tree where the real bird was perched earlier and claiming for himself something real.

If L.A. Story features people searching for signs, Me and You and Everyone We Know finds people surrounded by them. Hawkes’ coworker meets two adolescent girls that he’s legally forbidden from touching. He’s cloistered away from the world, while the girls are hurrying to sexualize themselves and become a part of it. He pastes signs on his window that detail the sex acts that he’d like to perform on them, but we laugh at the signs. The girls cock their heads like concerned poodles and we never see them interacting with the man again.

The “new cruelty” alluded to in L.A. Story has become the new passivity. Whereas everyone in L.A. Story is aggressive and unguarded to the extreme, July’s L.A. denizens are introverted to the point of unknowability. They’re as shy as they are fiercely singular, as if they’re so afraid of repeating the trends and archetypes of yesteryear that they’d rather retreat into their shells than be misidentified, choosing instead to poke at each other through channels of communication both primitive and digital. The distance between these people seems extraordinary in the wake of the L.A. Story extroverts from whom they descended, yet the geography of L.A. shifts and quakes but never really changes.

L.A. Story already found people refusing to find each other. Everyone cordoned off into their own little boxes, be it the metal husk of a car (so memorably lampooned by Tati) or their houses, the spaces between neighbors remaining rigidly divided. Telemacher hops in his car to drive over to his best friend’s house, and the camera hovers overhead to reveal that they live immediately adjacent to one another—he drives so as not to fluidly unite their respective domains. July’s film suggests that the old maps still apply, it’s just the legends that have changed. Its title is derived from the crude ASCII art of Hawkes’s character’s elder son, a densely clustered assortment of identical and neatly defined dots. “This is me, and that’s you, and that’s everyone we know.” It’s social cartography for the modern age, and it’s never been clearer than now that everyone is alone together. The representations don’t have to be distinct or particular—July isn’t asking us to consider who we are, but where.

When considering Me and You and Everyone We Know, I routinely find myself returning to cinema’s most tragic goldfish, a featured player in one of the film’s few communal events. July plays a multimedia artist who chauffeurs the elderly to make ends meet. While shuffling down the freeway with her favorite customer she spots (through the windshield) a goldfish in a plastic bag, forgotten by a child on the roof of a moving sedan. If the car alters its speed too much one way or the other, the fish will fall to its death on the pavement. As July’s passenger observes, the best thing for everybody would be if the car simply kept driving at the same speed forever. In Hollywood, inertia is bliss. Movies are essentially the illusion of movement, and the residents of L.A. Story’s Los Angeles are deeply committed to projecting that same illusion onto their own lives. Stasis is California’s top export, and naturally that doesn’t change. If today’s indie fare is yesterday’s middlebrow, it’s because people are desperately trying to stand still as the world spins around them—when life evolves faster than it can be understood, the movies change just enough that we don’t need to. 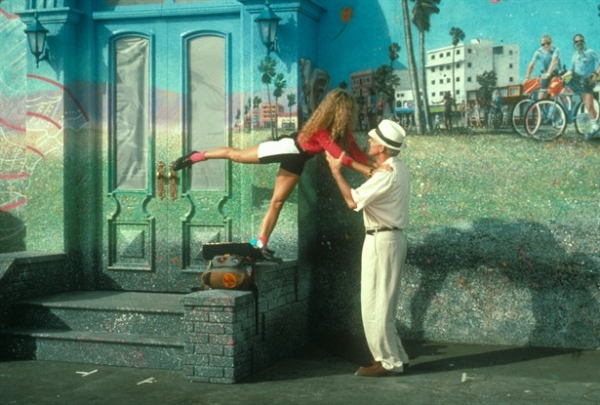