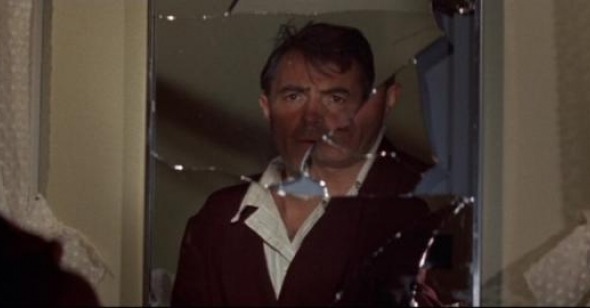 A year after Rebel Without a Cause, Nicholas Ray directed its dark, subtler counterpart: a complex work on establishment rather than youth culture, in the guise of a drama about cortisone addiction. Bigger Than Life is a textbook example of one kind of ventriloquist critique: the manic behavior of drug-ravaged teacher Ed Avery, always dismissible as mere madness, actually illustrates through magnification the accepted behaviors of a diseased society. His illogic is the logic of Fifties America carried out to its end. Ray‚Äôs take is so swift, sure, and brutal that, even with the privilege of 50 years‚Äô perspective and irony, the movie remains terrifying.

Ray establishes the cortisone drama on an already raw wound in the realities behind the American Dream: Ed (James Mason) struggles to support his family on a teacher‚Äôs salary, and secretly, shamefully holds down a second job as a taxi dispatcher. At the taxi depot he changes out of his simple suit from school into a nondescript jacket, a move if not from one class to another than from a position of respected authority to one of hey-macdom. He hides the job from his wife with the same excuse so many times that she ends up suspecting an affair‚ÄĒa neat way of setting up the subtler ways morality and societal norms automatically work to flag and police unusual behavior.

Furthering the sense of out-of-sight, out-of-mind, Ed also hides his illness‚ÄĒperiodic debilitating spasms of pain‚ÄĒfrom his caring family, a devoted wife, Lou, and a worshipful son. The flip side to the miracle cure that will make him ‚Äúbigger than life‚ÄĚ lies in these agonies that he doesn‚Äôt yet understand: without clear cause, and concealed, he must fear they come across as failings of character. Always interested in the full expressive potential of the body (cf. Jimmy Dean‚Äôs writhing, or his character‚Äôs humiliated/humiliating father on his knees in an apron), Ray writes this indignity upon James Mason‚Äôs body: one of the movie‚Äôs shocks is in relentlessly depicting Ed in mangled postures of extreme pain. Sometimes he looks like a western hero cut down and twisting in the wind, without the ennobling landscape and mission; other times his mask of a suffering face and his fallen poses almost approach classical sculpture, all manner of subconscious emotion dredged up by the bodily pain. Indeed, it is this pain that stops the film short from nearly the first shot: cutting from a slightly overlong high-school montage of kids scampering out at day‚Äôs end, a close-up of Ed‚Äôs hand reaching across his class desk‚ÄĒordinarily a simple way of entering a scene‚ÄĒis ruptured when Ed‚Äôs arm freezes in pain. Man, interrupted.

But in the Fifties, when the miraculous fruits of American ingenuity‚ÄĒaffordable home appliances, atomic diplomacy‚ÄĒmade anything seem possible and newly accessible, there should be no need for man to suffer. Enter cortisone, administered by the authorities of the medical establishment, that perennial repository of trust. Ed undergoes a battery of tests, which flash by in another, silly montage (with the usual joking about needles and bums), but there‚Äôs the sense that his doctors are slightly more eager about the chance to try the drug than out of deep concern for the patient. And in the Fifties, if father knows best, then doctor knows even better: as the ultimate authority, a doctor, especially a psychologist, is a threatening, emasculating figure to the man of the house (the one person, besides the boss at work, who can supercede his patriarchal authority). It‚Äôs a neutral, controlling role familiar from the faddish psychological (often Freudian) decoders who pop up in movies to this point, clinically framing a story‚Äôs psychosexual energies so no one has to worry (a favorite of Hitchcock, persisting, somewhat amazingly, all the way up to ne plus ultra Psycho). In Bigger Than Life, the doctor as institutional voice is never incorrect, irreproachable, unyielding. Later, when things go wrong, the same doctor stonewalls Ed‚Äôs wife, thereby underlining the doctor‚Äôs disproportionate power and, I think, condescension, as most films, laughably, do not. ‚ÄúYou‚Äôve been very brave, Mrs. Avery. Don‚Äôt go to pieces now,‚ÄĚ says the doctor, but Ray allows Ed‚Äôs wife the dignity of standing firm against such words. (The doctors will ultimately offer no satisfaction, however, insisting that it was only Ed‚Äôs misuse of the drugs that caused problems, a prime depiction of that slippery official way of sidestepping responsibility.)

Mind-altering drugs, which include cortisone when abused, always pose the danger of exceeding their society‚Äôs ability to contain them‚ÄĒand Bigger Than Life, adapted by Ray from a New Yorker article, provides an intriguing counterpart to the representation of mind-altering substances in the likes of tabloid PSA‚Äôs like High School Confidential two years later. Youth rebellion or reefer madness films dramatize the societal horror at (especially) sexual forces being unleashed or just exposed to daylight. In Bigger Than Life, the drug liberates Ed not only from the pain he used to conceal but from all sorts of other inhibitions‚ÄĒlaying bare all kinds of primal forces in frighteningly clarified form. As if becoming superhuman (well, within context), Ed pulses with new energy and confidence, both physical and intellectual‚ÄĒroughhousing for hours on end with his son, lecturing magisterially at parents‚Äô night, borderline leering at a co-worker, etc.

The brilliant irony, and subversion, of Bigger Than Life is how this transformation is recognized‚ÄĒas illness, or the fully realized suburban male? Ray welcomes the open identification of one major aspect of Ed‚Äôs transformation, what friend and school coach Wally (Walter Matthau, official bachelor and neat ever-so-slight slob-counterculture foil) calls the whole ‚Äúbig shot‚ÄĚ thing. Puffing on an oversized cigar, Ed hustles his wife to the ritzy department store (the one where she never shops) and, in a scene that presages Vertigo‚Äôs own scene of masculine dress-shop mania, has her try on dress after dress (‚ÄúI like you in bright colors‚ÄĚ). Don‚Äôt worry about the cost, he says, to the point that even his meek son says Dad is being ‚Äúfoolish.‚ÄĚ Ed‚Äôs high-class, aspirational fantasy is almost comical in its swagger and stereotypical accoutrements, from the cigar to the ostentatious nonchalance about cash to woman as ornament (indeed, Playboy, with all its iconography, was founded just a few years earlier).

Ed‚Äôs new fantasy persona is so clich√©d that it perfectly express social conditioning: he is fantasizing what a suburban male in his position and age would fantasize. And that‚Äôs the entry in Ray‚Äôs other, latent satirical level, his broader expos√© of American political and social tendencies. The key scene here is Ed‚Äôs megalomaniacal performance on parents‚Äô night: hijacking a glad-handing Q&A with parents in his classroom, he launches into a bombastic polemic against the flaccidity of wimpy pedagogies of self-expression and touts instead hard work, discipline, and a firm hand. It‚Äôs a facsimile of the Tough Father-speak that in our time has become the cornerstone of Republican rhetoric‚ÄĒwhich I observe only because the essentially sentimental, fearful nostalgia of conservatives hearkens back to this Fifties stance. The parents‚Äô initial reaction? Some shocked looks and comments, but, as Ray takes pains to show, when Ed starts up, they obediently sit down and take it. One mustachioed man, in fact, takes on the role of Ed‚Äôs booster, chiming in his support afterwards. The scene‚Äôs most curious shot is a lingering close-up on Ed‚Äôs face, impressive in Cinemascope, that resembles nothing so much as a political poster come to life, but the power suggested here is not just political but ingrained in social structures.

The scene is all the more striking because it‚Äôs difficult now to determine where his speech would register on the rude-threatening-insane scale. One has the sense Ray softens the blow through an earlier scene in which Ed‚Äôs young students explain their drawings to him‚ÄĒa presentation of societally acceptable weirdness and extreme emotion (the kid who draws a five-legged cow so ‚ÄúIt can stand better!‚ÄĚ or the angry kid: ‚ÄúThis is a man. He‚Äôs just maaad at his mother‚ÄĚ). But just as with the poses of pain, Ray, with Ed‚Äôs ruthless speech, has put the beast in front of us, and even if that beast is killed/cured, we can‚Äôt unsee what we‚Äôve seen. There‚Äôs something in Bosley Crowther‚Äôs Times review from the period of righteous indignation; he‚Äôs been shown something he wished he hadn‚Äôt seen, that disturbs him in ways he can‚Äôt articulate.

The classroom scene is, for me, the movie‚Äôs highlight, but the story of course winds on, with the disquieting creep of a movie whose genre we can‚Äôt quite identify but whose execution feels right at every turn. Bigger Than Life eventually moves from this into nearly horror territory, especially in Ray‚Äôs treatment of the home. Before cortisone, Ray organizes the domestic space as one where bad things are hidden in other rooms‚ÄĒon the bridge night of his initial breakdown, Ed cowers in the kitchen through most of the game, and later shuts off lights compulsively. Throughout the house ubiquitous posters for tourist locales implicitly suggest ‚Äúanyplace but here.‚ÄĚ But there‚Äôs no hiding: when Ed collapses before his own front door, his hand lands and sticks on the door buzzer, his pain reverberating through and filling the house. After cortisone, the first innocent symptom is Ed playing catch football with his son in the living room, the camera now suddenly mobile, opening up the space to his rampaging. His cure is imperfect‚ÄĒone night a depressive crying jag passes by. But soon enough, the ‚Äúhaunted house‚ÄĚ here lies in his absolute control of domestic life, a reign of terror sadistically simultaneous with his effectively separating from his wife and staying only for the child. ‚ÄúWhat a shame I didn‚Äôt marry my intellectual equal,‚ÄĚ he says to her, in a devastatingly heartbreaking scene, after which she offers to help him find a new house to live in so as to eke out some extra moments to spend with him. Ray films much of this in canted angles, shadowy corners, with the emblematic locale of that precipitous staircase, forging an expressionism with a touch of brooding, atomic-age pandora‚Äôs-box sci-fi.

Ultimately, after withholding dinner from his son on condition of finishing math homework, Ed enters a biblically messianic mania, seeking to reenact the story of Abraham‚ÄĒthe final phase. As inconceivable as it might seem, Ray keeps the possibility of this violence terrifyingly present, the prospect of the wife and son‚Äôs escape unlikely (like a horror-movie villain, Ed cuts the phone cord). ‚ÄúGod was wrong!‚ÄĚ goes Ed‚Äôs famous line‚ÄĒthe culmination of patriarchal prerogative over all, literally, that is holy. The pitch of emotional, psychological, religious, societal hysteria is all concentrated in Mason‚Äôs quiet, firm take on the absolute assurance of the insane. It‚Äôs an assurance we might recognize many places and fear just as much.