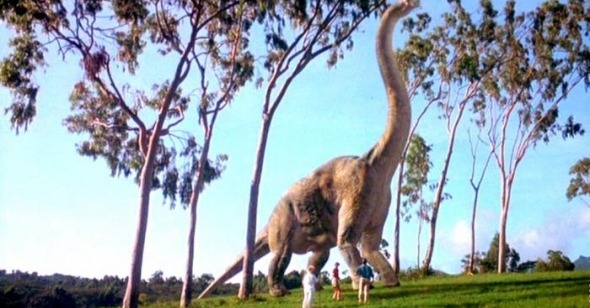 The Thrill Is Gone
Kristi Mitsuda on Jurassic Park

As is surely also the case for many of my generation, no filmmaker influenced my conception of the world when I was a child as much as Steven Spielberg. My earliest cinematic memory is of being carried out of a theater by my dad upon E.T.’s conclusion because I was sobbing so hard I couldn’t walk (and later, my sixth-grade crush would be affirmed when I noticed him crying during a video screening of the movie at a school sleepover). To a seven-year-old still blissfully unacquainted with racism and the ways it’s represented in popular culture, yet subconsciously aware of the dearth of actors who looked like me in the movies, Indiana Jones and the Temple of Doom could uncomplicatedly seem the best movie ever, in part due to the novelty of seeing a scrappy Asian kid onscreen as Indy’s sidekick. And though I wasn’t yet born at the time of Jaws’ release, I saw it on TV enough growing up that I always harbored a slight fear of the ocean despite the fact that going to the beach every weekend was par for the course growing up in Hawaii.

I’m not sure exactly when I began to part ways with Spielberg. Perhaps I’d internalized his movies to such an extent that my teenage self—too cool for him in the new cinephile clothes I was just starting to try on—felt the need to instigate a separation-individuation process from him just as if he’d been one of my parents, his unabashed sentimental streak growing increasingly abrasive and embarrassing to me. But sneaking in just under the wire of my disillusionment was 1993’s Jurassic Park; I was still in Spielberg’s camp, willing to wander in and wonder at the worlds he created. The director’s sci-fi and adventure blockbuster pedigree made him the perfect choice to translate Michael Crichton’s ballyhooed book to the screen. High-schoolers at the time, my brother, sister, and I waited patiently in a long line that snaked around the mall as camera crews for the local news captured the opening-day madness, the commotion pronounced not only because everyone wanted an answer to the question of the day—could Spielberg really pull off the trick of bringing dinosaurs to life?—but also since so much of the movie was shot on the islands (though the story fictionally set off Costa Rica), providing locals with the rare thrill of recognition.

The answer to the question was an emphatic yes, confirmed by that first glimpse of the creatures, within a half hour of the movie’s opening. When John Hammond (Richard Attenborough), creator of living dino zoo Jurassic Park, along with his exclusive guests—paleobotanist Ellie Sattler (Laura Dern), paleontologist Alan Grant (Sam Neill), mathematician Ian Malcolm (Jeff Goldblum), and lawyer Donald Gennaro (Martin Ferrero)—find themselves stopped at a spot overlooking a watering hole in which feeding brachiosaurs roam amongst the treetops, the characters’ awestruck reactions mirrored ours; in that sold-out theater, when Alan tearfully remarked to Ellie, “They’re moving in herds; they do move in herds,” I remember my own eyes welling up, too, those digital dinosaurs looked so damn beautiful and true beyond anything dreamed possible. So when Ian breathlessly murmured, “You crazy son of a bitch, you did it” of Hammond, we couldn’t help but realize he was also referring to Spielberg. Set off by John Williams’s florid score, natch, the movie boldfaces this first encounter; right off the bat, Spielberg’s regular composer as usual tries to rip our hearts out, but the soaring musical riffs, though later recycled to stir kneejerk emotion in subpar sequels (including perhaps the least entertaining and most soulless movie Spielberg’s ever made, The Lost World: Jurassic Park), at that introductory sighting seemed a fittingly majestic accompaniment.

But how does a film premised mostly on succeeding in the seemingly impossible technological task—at the time—of creating lifelike dinosaurs play now in an era when the bar gets raised ever higher in terms of special effects? CGI technology prior to Jurassic Park had been used to create effects in numerous films, including other generationally significant sci-fi movies of the era like Tron and The Last Starfighter as well as James Cameron’s The Abyss and Terminator 2: Judgment Day, but Spielberg’s pioneering use proved beyond a doubt that living creatures could be realistically rendered with computers. The dinosaurs themselves remain astonishing specimens today even when viewed on less-than-optimal television and laptop screens, possibly due to the director’s combined use of both digital effects and traditional animatronics. But the experience as a whole doesn’t fare quite as well.

After the excitement of the beasts’ unveiling, much of the following film concerns itself with the necessary expository questions—in response to Alan’s incredulous, “How’d you do this?”—along with didactic moral debates about coulda vs. shoulda. Spielberg dispenses with the explanations as efficiently as he can, in a manner that neatly coincides with the theme park nature of Jurassic Park itself, the tour starting out in a lab area where a family-friendly animated short explains the scientific foundations of the park’s genesis. But a significant amount of time goes into set-up for the later action sequences, commencing after tech employee Dennis Nedry (Wayne Knight) powers down the park’s security systems, opening up a window to smuggle out dinosaur embryos to a competitor—and the dinosaurs an opportunity to escape their electric fences.

Although at the time the tyrannosaurus-escaping-his-paddock and velociraptors-in-the-kitchen set-pieces felt enthralling, so much of that initial buzz stemmed from seeing the creatures come to life. Now gone, this leaves behind little more than a serviceably diverting narrative that often lapses into tedium, as the film cross-cuts between strands involving Nedry’s traitorous actions, Ellie and the park employees’ attempts to turn the power back on, and Alan and Ian escaping the T-rex. Down times with the dinosaurs, like Ellie and Alan tending to a sick triceratops, allow us to enjoy being in the presence of the mythical creatures of our childhood obsessions, but such encounters are given short shrift in favor of the chase. And save a few iconic shots—like the concentric circle ripples in the plastic cups of water sitting on the dashboard indicating T-rex’s presence—Spielberg mostly leaves the heavy-lifting to the effects in terms of aesthetics; the cinematic design is in service of them rather than part of a grander visual conception, and overall the film lacks the compositional dynamism that characterizes later artistically ambitious sci-fi films like A.I. and Minority Report.

Flaws cited by critics at the time of the movie’s release thus seem more glaring than ever. Jurassic Park’s characters and script are nearly hack-level bland. The movie never finds its emotional center, which it tries to locate in the relationship between Alan and Ellie, as well as the paleontologist’s bonding with Hammond’s grandchildren, Tim (Joseph Mazzello) and Lex (Ariana Richards), who join the researchers on the island. Alan and Ellie’s relationship is at first defined quite deftly, reliant almost completely upon the actorly skills of Dern and Neill (surprising and wonderful casting choices for their naturalism and freedom from big-star baggage, even if they’re not given room to do much in the movie); the only indication that the two are a couple—which seems so insufficiently established that Ian feels comfortable blatantly flirting with Ellie in front of Alan—comes through their body language, expressed most effectively in Ellie’s playful, physical ease with Alan, and is only confirmed when the chaos-theory-obsessed mathematician asks the latter about it directly.

The pivot point of their relationship is established at a dig site in the Badlands prior to arrival at Jurassic Park in a scene which sees Ellie teasing Alan about giving a kid in the group a hard time; their tentative joking around the subject suggests that his disinterest in children might be the stumbling block in their relationship. But the more pointed ways that the script later works this out—from Lex choosing to ride in Alan’s jeep because, “[Ellie] said I should ride with you ‘cause it would be good for you,” to Alan tossing Ellie a meaningful glance as the children later nestle under his arms as a helicopter speeds them to safety away from the island—feel schematic, presumptively prescriptive in its positively coded suggestion that the couple will yet make its way toward traditional-family-unit building, a central concern of Spielberg’s as usual. As if Alan’s previous lack of interest in children should be taken as a defect, the entire adventure of Jurassic Park effectively serves as an elaborate set-up to correct this deficiency (although, amusingly, the non-Spielberg-directed Jurassic Park III overturns this “happy ending” and shows us that Alan and Ellie don’t end up together; she’s married, with kids, to another man).

Jurassic Park is also littered with even less-developed secondary characters (including a pre–Pulp Fiction Samuel L. Jackson) and easy punchlines, courtesy of a screenplay by Crichton and David Koepp, including many clichéd, cheap shots at the expense of the lawyer who seems present purely to provide a punching bag (even the man’s death—apparently no tragedy since he is, after all, a lawyer—is treated as an occasion to laugh as he’s eaten alive while sitting on a toilet). The movie also becomes cartoonish in other ways that break the spell cast by the dinosaurs’ realism; during the movie’s climax, for instance, one of the raptors discovers the humans amidst fossil bones in the compound and, to this viewer at least, actually seems for a moment to stare into camera and smile as if relishing what’s to come.

It’s hard to discount a film that had such immense impact, and which is still vividly recalled all these years later for so thrillingly providing the pure pleasure of cinematic spectacle. But the superficial rush has worn off and left little in its wake to hold onto (though it seems fitting that the movie is set to be revived next year with a 3D transfer; it’s one of the few titles announced for rerelease in the trendy format that might actually warrant the treatment). And in retrospect, looking at Spielberg’s oeuvre, it’s hard not to see the Jurassic Park enterprise as something of a final frivolous fling for the director before turning to more serious subjects; later that same year, Schindler’s List would be released.