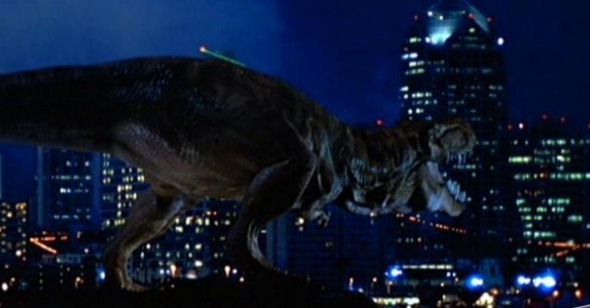 Claws Out
Justin Stewart on The Lost World: Jurassic Park

The three and a half years that elapsed between the release of Schindler's List in 1993 and The Lost World: Jurassic Park in 1997 was the longest Steven Spielberg had gone without directing a feature film since he started. In the meantime, he had numerous producer credits, cofounded DreamWorks, and allegedly directed some scenes for a “film school in a box” CD-ROM starring Quentin Tarantino and Jennifer Aniston, but by all available evidence it was a break, and one obviously deserved after that 1993 in which he released both his highest-grossing movie (Jurassic Park) and his most universally acclaimed and respected picture. Intentionally or not, Spielberg's seeming omnipotence during that watershed year, followed by the long wait, generated anticipation for his next movie that this clunkily titled sequel couldn't fully satisfy.

Spielberg knew he wanted to return to Jurassic Park, even if Michael Crichton initially didn’t. It was goading from the director, as well as fans and other interested parties, that convinced the author to write the follow-up novel during that gap between movies. It would be naïve to deny that Spielberg sought this project in part because it was an opportunity to make another surefire pile of money, but there were other reasons. It had pained him to see Jaws cheapened by its tawdry sequels (although neither Jaws 2 nor 3-D are without their delights), and he said in a 1997 Premiere interview with Peter Biskind that he “couldn't face the same nine-year-old” who had sent letters requesting the sequel to E.T. that he would never make, asking why he’d abandoned Jurassic Park. Also, between the draining heaviness of Schindler’s List and the soon-to-be-released Amistad, Spielberg was looking for a kind of easy relief (“I wanted to step into the shallow end and get used to the water. I wanted to do something familiar,” he said in Premiere), and while The Lost World was a hefty undertaking requiring painstaking work, its familiar, escapist trappings allowed Spielberg to operate in full populist showman mode, without the burden of history. (The effort in Schindler’s List is palpable; the stress caused by its maker's need to simultaneously convey the horror of the Holocaust, do right by survivors, and tell a stirring tale of uplift).

Yet just because The Lost World is dino-tainment does not mean Spielberg’s emotionally absent from it. He takes escapism and fantasy too seriously to be a cynical “one for me, one for them” director, and his genuine love of movies like the original The Lost World (1925), King Kong (1933), and The Beast from 20,000 Fathoms (1953)—its Ray Harryhausen–designed critter wreaking havoc on Manhattan prefigures the T-Rex’s romp through San Diego—means that there’s no inherent descent into the slums when he moves from Schindler’s List to this, or from Munich to Kingdom of the Crystal Skull.

Is the essential moral of this story much different than that of Schindler’s List? Spielberg said that while Jurassic Park was “about the failure of technology and the success of nature,” its sequel was “about the failure of people to find restraints in themselves and the failure of morality to protect these animals.” Oskar Schindler’s moral triumph was a dim blip amidst human failure to find restraints, fathoms removed from but distantly comparable to the plight of the “good” scientists against unscrupulous, unnatural greed in the Jurassic movies. That might sound severe in light of The Lost World’s missteps and its plain status as an adventure blockbuster sequel, but it suggests that the revisit wasn’t done out of mindless or avaricious regression. It’s darker than Jurassic Park, with larger and more abstract antagonizing forces, and production designer Rick Carter meant more than the literal when he said it's “Jurassic Park post–Schindler’s List… this world is lost.” DP Janusz Kaminski’s color palette is drabber, and richer—there are less of the rollercoaster reds and yellows of the first, Dean Cundey–shot film. None of which is to say it's a better film than the first, only different, and justifiable.

For all of the groaners in David Koepp’s screenplay, he does one difficult thing undeniably well—he gets a character from the first film (Jeff Goldblum’s chaos theorist Ian Malcolm) to return to a dinosaur-infested island swiftly and credibly. The obligatory mood-setting opening shows the female offspring of a Hawaiian-vacationing rich family (“We’re having prawns—your favorite!”) being swarmed by deadly compsognathus. (The scene is a rarity for Spielberg, as the seemingly shredded girl is very young; we learn later that she survived, however). Cut to Malcolm strap-hanging to a meeting with Richard Attenborough's disgraced InGen CEO, where he learns that there's a “Site B,” a second island where the real work of dinosaur repopulation has been taking place, and that Malcolm’s girlfriend, paleontologist Sarah Harding (Julianne Moore) is already there. So it becomes not a research mission, but a “rescue mission,” and Malcolm is soon plunked down on Isla Sorna, 87 miles southwest of Jurassic Park site Isla Nublar.

Goldblum’s drastically upgraded role here is a blessing. For all of their glibness, Malcolm's opinionated riffs in Jurassic Park did what good popular science does–they made abstract theory understandable and entertaining. And Malcolm’s mixture of uptight neuroticism and black-clad cool was custom-made for Goldblum. His only occasionally grating charisma sustains The Lost World, and though he doesn't get much help from an uninspired Moore, he's matched in outsized personality by an especially leathery Pete Postlethwaite, playing big-game hunter Roland Tembo with expert violent articulation. As the Attenborough character's exploitative, profit-seeking nephew Ludlow, Arliss Howard is an obvious caricature, but he's having fun with it (“this suit costs more than your education,” he sneers at Goldblum).

Although naturally none can recreate the sense of newness and fear in that first T-Rex attack in Jurassic Park (the excitement of the revelatory CGI combined so well with master puppetry), there are spectacular Big Scenes here, most famously the double-T-Rex strike that sends Malcolm and team's trailer off a cliff. While the trailer dangles from a precariously tied rope, inside, Moore’s Dr. Harding falls to the windshield, which slowly cracks toward collapse as we watch from both above and below her, in space. Spielberg's suspense here is expert, almost sadistic. A scene in which velociraptors snake through a meadow, picking off hunters one by one, is visually arresting—an overhead shot shows their silent trample through the tall grass as three vivid, intersecting lines. The grand finale, with the T-Rex let loose on San Diego, is another great spectacle. Since it happens so late in the film, there's not enough time for a full city attack (he mostly sticks to a mile or so radius from the dock), but it’s thrilling to behold the beast convincingly obliterating mundane terrain. There are corny gags, like the fleeing Japanese tourists (“I came to America to get away from all this!” according to one translation) and the excited kid in his bedroom (deadpanning to his eye-rolling parents, “There’s a dinosaur outside”), and some head-scratching fake movie cut-outs seen when a Blockbuster Video is smashed (Tom Hanks in . . . Tsunami Sunrise??). But the finale effectively ups the ante (it left Jurassic Park III with little to do), and loudly drives home the message that experimental animal genetics and unchecked capitalism do not happy bedfellows make.

So we have a committed director bent on entertaining, an enjoyable Goldblum, those great Big Scenes, and Spielberg and team’s generally first-rate, optimal mixture of analog and CG effects. Then why is The Lost World so mediocre? In brief, because of all the bad stuff. Despite its few cameos, the “magic” that was in Jurassic Park, Close Encounters, and so many other Spielberg films, is missing. Foregoing the first's gradual buildups and delayed gratifications, The Lost World goes for full immersion. This might be a necessary symptom of the wilder nature of Site B (Isla Sorna), but the result is confusing anarchy. Fairly early into the film, there are dinosaurs everywhere, being bagged and tagged by safari-shorted legions. Disastrously, the movie's sloppiest CGI is in Malcolm and Harding's first encounter with some friendly stegosauruses. It gets at a problem noted by Ian Freer in his book The Complete Spielberg, that Jurassic Park “merely” had to top the generally substandard cinematic dino-mation that had come before. But then The Lost World had to top Jurassic Park.

Vince Vaughn, freshly hot from Swingers and several years before The Bloating, is an irritant as a cool-guy documentarian, his attitude redundant next to Goldblum’s. Like the name of the ship that brings the T-Rex ashore in San Diego (the SS Venture), Vaughn’s camera-wielding Nick Van Owen might be a nod to King Kong director protagonist Carl Denham, but his baggy-sweatered, faux-New Yawk jivin’ characterization comes across only as a lazy attempt at hipness injection. Worse, far worse, is the awkward, forced insertion of Malcolm’s daughter Kelly (Vanessa Lee Chester), a supersmart teen with gymnastics skills (comparable to Tim’s computer knack in the first movie) who smuggles herself onto her father’s flight to the island. Koepp feeds her “normal kid” lines like “She doesn’t even have Sega—she’s such a troglodyte” to make her relatable to young audiences, then has her know what to say and do in every situation. Kelly’s early displays of gymnastic talent foreshadow one of the most unfortunate moments in Spielberg’s filmography. Kelly and Dr. Harding are trapped in a shed, raptors scratching at the door, as the girl ascends the interior framework and mockingly shouts “Hey, you!” to her prey. Timing her fall, she swings down on some beams and performs a precisely aimed twirl-kick, booting the dino through the window! This painful moment of kiddie-pleasing political correctness might be some elaborate apology for Temple of Doom’s caricatured Short Round, but it makes a joke of the same dinosaur the movies had strained so hard to portray as the deadliest, and corrects anyone who was trying to take the material somewhat seriously.

Such dopiness diminishes a movie that’s still a bit better than it’s usually given credit for. Koepp’s blunders are balanced out by Kaminski’s dense work; like Postlethwaite and Howard, the grubby cinematography is tuned in to the darker frequencies that Spielberg’s action dances around. Though he delivers on grand spectacle, the director’s disengagement during the expository business is transparent—in Jaws, Jurassic Park, and War of the Worlds, such scenes are often as compelling as the action, not just “gotten over with.” But the movie still achieves an overall tone of dread and pessimism that is its own within the Spielberg filmography, and makes the most sense when one realizes it came after his altering experience on Schindler’s List.