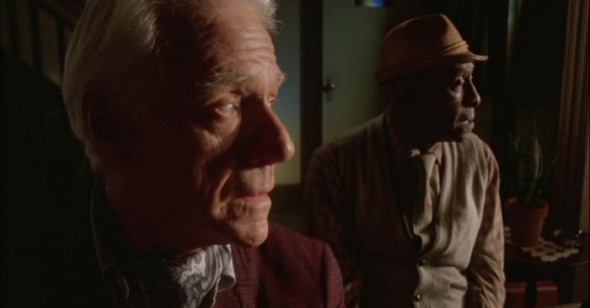 Lost Boy
Julien Allen on “Kick the Can” from Twilight Zone: The Movie

A portmanteau film is like a pentathlete, practicing five disciplines pretty well without excelling at any of them. What’s more, their disparate vignettes don’t belong in a coherent world (Short Cuts) or as part of a snazzy structure (Pulp Fiction), but are instead stitched together with the thinnest of excuses, usually an opening setup presenting a storyteller, who simply joins the bits with narration. In 1983’s Twilight Zone: The Movie, we know the origins of the concept, so we get a mood-setting prologue with Albert Brooks and Dan Aykroyd actually talking about the original series, then make do with the discombobulated voice of Burgess Meredith, intoning Rod Serling–esque Zone platitudes with relish.

The cinematic precedents which might have made this classic-TV adaptation feel like a good idea at the time are largely British: the likes of Amicus Films’ Tales from the Crypt and Dr. Terror’s House of Horrors, or perhaps more salubriously, the 1945 Ealing Studios classic anthology picture, Dead of Night, featuring Alberto Cavalcanti’s ventriloquist’s dummy nightmare (briefly winked at in George Miller’s entry here) and Basil Dearden’s stunningly concluded connecting thread set in a country house. Released just one year before Twilight Zone: The Movie, the Hollywood-produced Creepshow benefited from having a single writer (Stephen King) and director (George Romero). Non-horror portmanteaus such as RoGoPag, Four Rooms, and Aria (not to mention the twin hate-crimes of Paris, je t’aime and New York, I Love You) tend to be best forgotten, nearly always lapsing into directorial indulgence, outright tedium, or both. Twilight Zone: The Movie, despite clearly being a vanity project, does just enough to escape the same accusations.

The dynamics of the project are oddly contradictory. Two premier-league directors (Spielberg, who at the start of his career, had worked with Twilight Zone creator Rod Serling on television and had collaborated with chief writer Richard Matheson on Duel, and John Landis—both producing also) hired two lesser known but respected craftsmen (Joe Dante and George Miller) to join them in bringing classic episodes of a beloved television series back to life, in color, via the big screen. The only trouble is, the new kids on the block completely outperformed their hosts, principally by eschewing any kind of subtlety or reverence towards the older format.

By the time we reach Spielberg’s second entry, “Kick the Can,” John Landis has already delivered one terrific scare in the prologue (let’s just say if someone asks you if you want to see something really scary, the advisable response is “no thank you”), but then proceeds to pound the audience on the subject of race relations, via a highly questionable and rather feebly made (though transparently “Zoney”) story entitled “Time Out,” involving Vic Morrow undergoing all sorts of unusual time-traveling punishment for being a bigot. As if by design, Spielberg's entry takes up the baton with a brace of Jewish characters and an African-American hero. It’s set in an old folks’ home, visited by Scatman Crothers, in fully unapologetic Uncle Remus/Bagger Vance mode (a demeaning performance which whilst quite deliberately nostalgic, must surely have felt severely dated even in 1983). With a glint in his eye he persuades all but one of them into a nighttime game of Kick the Can, during which they metamorphose into . . . children (something of a thematic departure for Spielberg, this).

They are (unlike Cocoon) replaced by child actors playing (unlike Freaky Friday) younger versions of themselves. A moral fable about how youth is but a state of mind, bathed in constant music by Jerry Goldsmith (one of the original Twilight Zone composers, along with Bernard Herrmann), it feels very much the equivalent of the dreadful Basil Radford/Naunton Wayne “golf with a ghost” episode in Dead of Night. It isn’t scary, it’s barely even spooky, it’s fueled by the purest essence of whimsy, and in Crothers’s character it personifies the adjective “homespun” to the point of parody and beyond. Yet . . .yet . . . it does have one small advantage over its competitors, in that it has space to breathe, it’s the only episode that chooses humanity and optimism, and it features lovingly created characters who exist for themselves, au naturel, rather than merely to drive a clever twist-ridden plot, or to scare the living fundament out of you (as John Lithgow is absolutely determined to do in George Miller’s final episode, even if he is to die trying).

The familiarity of Spielberg’s technique is like a comfort blanket—just as the whole episode is like a form of respite from the rest of the collection’s unpleasantness. An early shot features a window from the inside of the old folks’ home, through which we are introduced to Leo Conroy—the character who will later tragically resist Crothers’s exhortations to “live a little”—being told for the umpteenth time he can’t go home with his son for a visit: the window itself behaves as nothing less than a cinema screen against a completely black background, through which a zoom establishes the shot as the music swells. There is still a hats-off-worthy audacity in making such an obvious construct feel completely organic. The elderly actors (in particular TV stalwart Murray Matheson and Selma Diamond as willing can-kickers) are immediately likeable, even if the child acting is severely uneven and overladen with groping sentiment. The interior lighting, by E.T’s cameraman Allen Daviau, is all bronzes and browns, caramelizing the gloom to create a sense of magic flowing from Crothers’s wake.

Yet the original “Kick the Can” Zone episode had no magical negro, but one of the old folks himself (played by Ernest Truex) deciding one day that he had the gift, in the face of severe scorn from his comrades. Spielberg’s “improvement” of the original smacks of the class swot copying some poor kid’s homework and then overdoing the attempts to disguise it as his own.

“Kick the Can” certainly has nothing like the visceral impact of Joe Dante’s third episode, “It's a Good Life,” which depicts the horror of a physical world created at the whim of a child (complete with vile Rob Bottin–designed terror-toons appearing when said tot is in a bad mood); or the most accomplished fourth, George Miller’s straight-up bowel-loosener “Terror at 40,000 Feet”, about a passenger’s paranoid hallucinations of a gremlin attacking the plane. For the obvious question—why did Spielberg chose this weaker segment to direct?—there is an obvious answer: Spielberg was experimenting with a more direct approach to his obsession—how to bring Peter Pan to the screen. In so doing, he was achieving, after Poltergeist and E.T., ever diminishing returns on a subject that might just have been too close to his heart.

The culmination of this process, Hook, misfired because it was Spielberg trying to play his own game of “kick the can”—a grown-up, awkwardly telling today’s children about childhood, in a cinematic language (woeful slapstick and a catastrophically mawkish Robin Williams performance) that felt decades out of touch. Hook was such a colossal artistic failure, especially considering its thematic importance to the director, that Spielberg never looked back. His next film, Jurassic Park, featured prolonged and sadistic scenes of children in fear for their lives. A few years and a few Oscars later, Spielberg would get his wish—courtesy of Mr. Kubrick—with a sci-fi script that let him place a child at the heart of a much wider set of questions, exposing the spectrum of childhood fears and dreams wider than ever before.