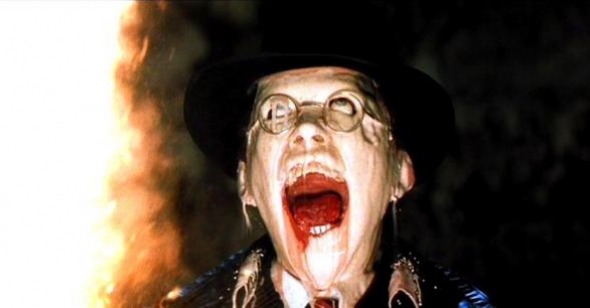 Revenger’s Comedy
Julien Allen on Raiders of the Lost Ark

If there’s one thing of which serious supporters of Spielberg-the-director don’t like to be reminded, it’s his “executive” association with all manner of incredibly silly films. We might forgive him his mogul status—not only can he direct in almost any genre, he has a nose for the business of film which must make him the envy of many a full-time studio boss—but the real elephant in the resumé is his rather fetid collection of creative collaborations with projects of inferior caliber: his producing credits on the likes of the Transformers films, Deep Impact, The Mask of Zorro, Twister, etc. Yet, looking at the entire “adult” period of the directorial career being celebrated in this symposium, it would be misleading not to acknowledge Spielberg’s own sporadic tendency to delve back into the defiantly lowbrow, fast-moving, roller-coaster ride, such as Jurassic Park, its sequel The Lost World, and The Adventures of Tintin. Spielberg’s desire to revert on occasion is not simply a symptom of his need for commercial success, or an egotistical desire for box office records; while it’s hard to imagine Spielberg ever directing a film he didn’t think people would want to watch, there’s no real evidence that Spielberg the mogul would ever dare to pressure Spielberg the artist into accepting a commission. He famously turned down Harry Potter because it presented no creative challenge to him (“Someone could just have written a check for a billion dollars—I don’t direct movies because they’re gonna be phenomenons, I make movies because they have to touch me in a way that commits me to a year or two years of work”).

An examination of Spielberg’s joyous 1981 caper Raiders of the Lost Ark, a film that stakes a remarkably legitimate claim—considering its age—to the title of greatest action/adventure movie of all time, reveals instead the passionate belief of its director in the role of film as an immersive audience experience and the creative value of the uncomplicated, hyperkinetic thrill ride, a belief as close, childlike, and personal as any exhibited by his cinema. From the day a disgruntled six-year- old Steven complained after his father took him to see Cecil B. DeMille’s 1952 Technicolor extravaganza The Greatest Show on Earth, on the basis he had thought he was being taken to see a real circus, through the moment Spielberg and George Lucas walked out of a London theater having watched Terence Young’s From Russia with Love and looked at each other agog with admiration, Spielberg has been fascinated with the technical audacity and showmanship inherent in pictures, which, to all intents and purposes, competed with the sort of live entertainment provided by a circus, a theme park, a waxwork chamber of horrors or a monster truck show. In other words, films could bring to vivid life childhood memories of bedtime stories and comic books, and in Raiders, the works of Edgar Rice Burroughs and Scrooge McDuck. So when critics allude to his “personal” filmmaking, they might draw on Raiders’ close contemporaries wherein small-town domesticity is invaded by a fantastical “other” (Jaws, Close Encounters of the Third Kind, E.T. the Extra Terrestrial); some of these films’ most resonant sequences involve children sitting with their parents at dinner tables; Raiders represents a no less personal reminder of what the young Steven wanted to watch on the TV when dinner was finished. And perhaps even a little bit more than that besides.

Spielberg’s approach to Raiders, and to its main character, is to make a winking allusion to, followed by the almost immediate subversion of, genre cliché. Featuring a character whom creator George Lucas justifiably claimed to be “better than Bond,” the virtuosic opening Bond-style set-piece in the booby-trapped cave introduces Indiana Jones as a typically rugged and mysterious comic book hero—in silhouette, his face hidden from our view—who with one crack of his bullwhip can disarm a double-crossing sherpa. But this pretense is kept up for no longer than the credits themselves—Harrison Ford’s rather awkward gait and sweaty confusion in front of the golden idol, as he substitutes the sandbag (note the deeply uncool positioning of his hat at the top of his forehead at the key moment) quickly betrays Indy’s most likeable trait: vulnerability. It’s an attribute that Lawrence Kasdan’s script and Ford’s performance proceed to lay on thick. Cutting a pathetic figure when he finally escapes the cave, covered in cobwebs and forced to hand over his prize, Indy comically flees a band of “Hovitos” tribesmen in visible fear for his life (more Buster Keaton than Buster Crabbe), confesses his squeamishness as he finds a snake in the cockpit of the escape plane, then as if this weren’t enough, we cut straight to his day job, as a bespectacled “Professor” Jones awkwardly fails to cope with the overt attentions of two amorous college students (yes there are two: the young lady making eyes at him in class, and don’t forget the young man waiting till the others have gone, then pointedly but awkwardly leaving an apple on his desk). All the charm and charisma of Ford’s hero (his double life and his bravery in the face of such vulnerability) is unloaded on the audience in the first fifteen minutes, making the remaining hundred a simple case of placing Indy in constant, glorious jeopardy. Later we’ll learn what Indy does that Bond doesn’t: Indy moans, Indy loses his temper, Indy doesn’t like the sun—in fact his most characteristic expression in Raiders is “fed up” (something Ford always excels in). Nor is he conventionally heroic, as illustrated when he finds his leading lady, Marion (Karen Allen), tied to a post in the Nazi encampment—he opts, to her horror, to tie her up again and leave her there, so as not to alert attention to his presence. In this way, while the film may deliver action set pieces every bit as spectacular and outrageous as those in a James Bond film, Spielberg’s hero is so very much more appealingly real.

Beyond this, it might be sensible to conclude we should delve no further. Indy’s “motivation” is as unimportant as it is confused (he laughs off the religious mythology of the Ark—the “radio for listening to God”—yet refers to it later as “everything I got into archaeology for in the first place”) and though his perpetual duel with his French nemesis Belloq (Paul Freeman) is presented in the script as a complex tale of two selfish obsessives chasing the same dream (“archaeology is our religion,” says Belloq), it captures the audience’s interest as a simple race to the finish, yin versus yang, fedora versus panama. The rest is just great storytelling, bucketfuls of candy corn and a celebration of technique, as Spielberg, unshackled by the flight to realism which the structure of his “dinner table” films imposed, unveils a copious panoply of what would become hallmarks: craven attention to technical detail (Ben Burtt’s sound editing made use of Foley recordings of an old .3030 Winchester rifle for Indy’s pistol, and dolphin and sea-lion screams for the spirits escaping from the Ark); a singular flair for extravagantly kinetic and furiously innovative set pieces (the opening cave blast, complete with tarantulas and the world’s biggest marble run; the climactic, Romero-influenced Well of Souls horror show; the shoot out in Marion’s gin palace, which, before succumbing to flames, must have been amongst the more spacious and well-stocked establishments in 1930s Outer Mongolia); and the extended desert truck chase borrowed from Stagecoach then aped by many more but never itself bettered. One of Spielberg’s hallmarks is his stubborn refusal of the banal or the mediocre in the composition of a scene or its transition to the next chapter of the story. For example, a moment of the most prolix exposition in Raiders is transformed into a deliciously Hitchcockian sequence involving poisoned dates, underlining the ease with which Spielberg can juxtapose humor, suspense, and a grim punchline.

As so often before and since, Spielberg coaxes vivid character performances from unlikely sources: not just the appropriately serpentine Paul Freeman, but also grinning gamine Karen Allen—these two actors would never again recapture the blazing star power they radiate here. And whither Ronald Lacey? He’s simply unforgettable as the black-clad Gestapo interrogator Arnold Toht—a role turned down by Klaus Kinski on the classically Kinski-esque pretext that the script was “moronically shitty.”

And of course there’s the eye-watering, certificate-defying brutality. It’s this last aspect which stood out most strongly on repeat viewing and which, having seen Tarantino’s Inglourious Basterds in the intervening period (a film whose climactic “angel of death” sequence is bizarrely reminiscent of that of Raiders), makes it very difficult to ignore the theory that Spielberg’s film is an elaborate Jewish revenge fantasy. The Nazis take so much punishment in this film, their suffering at the hands of bullet, knife, fist, or airplane propeller is so lovingly rendered and lingered upon by the camera, and the face-melting climax is so explicitly and spectacularly horrifying, that calling it a simple catharsis of good overcoming evil just doesn’t quite cut the mustard. By invoking the Nazis’ apocryphal obsession with the occult (spawned by reports of Goebbels’ expeditions to Tibet and Nepal to uncover the origins of Aryan mythology, but later propagated by decades of bullshit speculation disguised as scholarship), Spielberg had both a tailor-made villain for Indy and the opportunity to have—many years before the altogether more responsible likes of Schindler’s List and Munich—a great deal of naughty fun: a monkey trained to give a sieg heil salute; Belloq as the collaborationist Frenchman, delighted to let the Nazis finance his own advancement; Toht, first seen on Indy’s plane reading Life magazine with a familiar sinister picture on the front (Raiders is set in 1936, two years before Hitler was Time’s man of the year) and later brandishing what appears to be a torture weapon...then folding it into a coat-hanger for his jacket. But let’s face it: the most fun is in seeing them all killed.

So in the context of a career symposium, where does all this belong? Is the thrill-ride picture simply a pragmatic sop to Spielberg’s need to keep his financial reputation up, or merely a proving ground for his need to innovate? Do we just create a lesser category and dump Raiders in there with its try-too-hard sequels and its cretaceous cousins? Look closer: this devotion to kinesis doesn’t just occasionally resurface in the likes of Tintin (as dazzlingly fleet a film as any in Spielberg’s cavalcade) but cross-bleeds into his choices for more thoughtful projects, such as Minority Report, Catch Me If You Can, War of the Worlds, and in particular Saving Private Ryan, whose opening beach sequence is so overtly, thrillingly cinematic that it either dwarfs or colors the rest of the picture, depending on your point of view: the victory of the technical over the human, the primacy of entertainment over maturity? Spielberg ushered in his quasi-pastoral role of “children’s filmmaker” with movies about gazing up at the sky in wonder, but he never lost the childhood appeal of gazing at the screen, or at the page. If fun is what drew you to the pictures, then fun, especially when it’s this artful, is really nothing to be ashamed of.