A Time to Live and a Time to Die 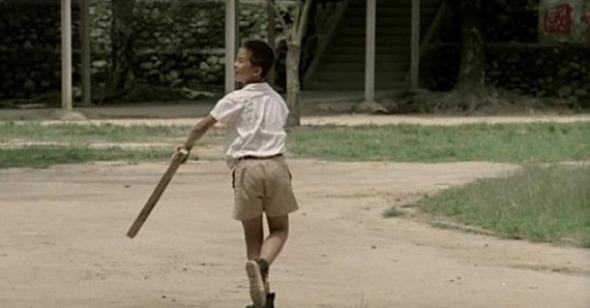 Since Hou Hsiao-hsien prefers long master shots—he often hangs back, taking it all in, rarely cutting away—it’s common to hear his camera described as static. Though untrue, the misperception is understandable. His camera follows the action, but its remove reduces the degree of required movement. Comparatively, shooting close-ups necessitates wide angles of movement, often spanning upwards of 180 degrees, and if handheld the full 360. From its distance, Hou’s camera shows a long and wide view, panning when needed but maintaining its original placement. Rather than motionless landscapes, his shots are like eyes gazing intently at a painting, seeing it in full yet scanning across the canvas to the forms within. The final scene of his most recent (and most mobile) film, Flight of the Red Balloon, literalizes this, his camera roving within Félix Vallotton's disquieting painting “The Ball” to contemplate a young boy scampering, a red ball looming, and ambiguous forms huddling. Overheard are school kids talking about the painting, their free-flowing conjectures synchronized with the camera’s movement, eyes and imaginations unbound despite the fact of the frame.

The subtlest of formalists, Hou Hsiao-Hsien is a director whose considerations of film language are so foundational—placement, movement, duration—as to be imperceptible, and so organic to the larger narrative as to seem nonexistent. Some would experiment with film form by actively pushing limits, stroking furiously at camera, lighting, and editing—the showy, copious manipulation intended as a demonstration of capacity. Hou is no less engaged, but like the best of minimalist painting, sculpture, and music, his choices challenge audiences to consider their relation to the art, to acknowledge their own distance from the object before earning intimacy. Yet his projects aren’t theoretically motivated. His films aren’t objects made simply for their effect. They are motivated by where the personal meets the universal, themes of memory, presence, love and loss, themes that the art of film is uniquely adept at expressing.

True to his artistic strategy but no less surprising considering his choice of subject, Hou’s A Time to Live and a Time to Die tells his own personal history from a neighborly distance. A fictional account of his family’s relocation from mainland China to southern Taiwan in the late Forties, and of the ensuing years of revolution-induced exile, the film recalls Hou’s rocky coming-of-age amidst political unrest. Vividly recreating time and place (often shot in actual locations from Hou’s past, in and around the town of Fengshan), with minimal intervention or flourish, events unfold in a verité, fly-on-the-wall style. Except here the fly squints from the wall of the adjoining room, or from the house across the street, intent but afar. The camera is rarely placed in the room where action takes place, creating frames—walls, windows, dividers—within the frame. Young Hsiao grows up in a cramped, sparse house, its wicker furniture evidence of transience thwarted. Hou shoots the space through deep focused layers, the backyard a backdrop to the father’s office, which is foregrounded by a windowless common room viewed from the furthest front wall of the house. The shot in reverse reveals how narrow the structure really is, but Hou’s camera placement maximizes distance. Furthermore, sound is largely dubbed, giving heard dialogue the quality of conjecture.

What at first frustrates the viewer—that characters, faces, and motivations are hard to discern—gradually takes on depth of narrative meaning. The father, always viewed from far-off and rarely sharing a frame with his children, is actually gravely ill. Not wanting to infect his children, he deliberately keeps his distance. Neither we nor Hsiao get to know the father before he dies, but his silent sacrifice looms large, transforming our perceptions of his, the camera’s, and Hou’s recollecting remove. Wanting to draw close, he, Hou and we can’t, making physical distance, not intimacy, the true emotional measure. In the film’s most wrenching scene, the father lies dead in his bed, and Hsiao and his siblings pay respects one by one, approaching the frightfully immobile body and taking it by the hand. Placed for once within the room, the camera closes the distance on death and sorrow, and the intimacy is unbearable.

Distance also keeps us at a remove from the young Hsiao, whose exploits dominate the narrative but whose subjectivity is established without the aid of point-of-view shots or close-ups. He’s often just another figure in the landscape, as active as he is observant, as dispassionate as he is emotional. Hou privileges his own story not with his shot-making but in the dramatization and arrangement of his memories. Since the film begins with a straightforward voice-over of Hou introducing his remembrances, his visual strategy confounds us more than it otherwise might, our expectations unmet when the protagonist gets lost in the canvas. Yet as the film accumulates scenes and details, family tragedies and petty crimes of youth, Hou’s way of depicting memory and self proves to be the only honest approach. Close-ups might be the quickest path to empathy, but here they wouldn’t be true—neither would a quicker pace, as it’s the yawning gap of time and the dull, deepening sense of loss that slowly hits home.

From the outset Hsiao is a misbehaver. No worse than other pent-up, adventurous adolescents, but while the long-view prevents an overemphasis on his actions it also shows the cost to others in the frame. When he gambles away money on boyish games there’s real panic and bewilderment in his mother’s anger; the money lost, no matter how minimal, was not money to spare. When he and his teenage friends plot to mug a street vendor, it’s more menacing than naughty. The boys gather beneath a majestic old tree in the town’s dusty open plaza, waiting for the vendor to pack up for the day and gathering uncomfortable stares from older bystanders. The boy charged to unseat the target from his moped is mocked by Hsiao when he fails, but the scene’s reversion to shuffling inactivity provides more relief than mirth. Distance provides evenness, but there’s also a degree of self-incrimination from the filmmaker looking back and across the plaza. And as his mother suffers from cancer, Hsiao faces daily conflicts over whether to stay at home or participate in violent turf wars that his machismo helped escalate. Hou crosscuts the quandary deliberately, matter-of-factly, the strategy growing discomfiting for the moral imbalance and the regret that informs the clarity of the recollection. Distracted, as Hsiao is, by the manufactured—if inevitable—conflicts of youth, we don’t appreciate mom’s presence until she’s gone (and the film is nearly over). And when that loss leaves the children with only grandma left to care for, her physical and mental decline is but a living reminder of what’s been lost forever.

Throughout the film, it’s the grandmother who reminds the family of their dislocation. Her senile habit of wandering far from home, only to be returned by rickshaw drivers insistent on proper payment, is a running joke but also the expression of sentiments sublimated by the others. She leaves home in search of the faraway, unreachable Mekong Bridge, the link to her ancestral home on the Chinese mainland. Sometimes she brings Hsiao on these walks, and the impossible journey often culminates in their happening upon a mango tree—a sign to grandmother that they are near to home—from which they then pick armfuls of fruit. Deposited back at the house, the upturned basket of mangoes is both a punchline and an aching reminder. Too young to remember the mainland (his family moved to Taiwan when he was a toddler), Hou has made a film that nevertheless rhymes with grandmother’s futile passage, his distance from the past as irresolvable as her exile.

Hou leavens all this loss and regret with a bright, wistful score. An at times jarring counterpoint, the music communicates warmth while the visuals navigate distance. Disturbing expectations of tonal consistency, the music pointedly sprinkles nostalgia over even the most upsetting memories. Hou’s gaze at his past is steady and unsparing, but it’s also a gaze of longing. Melodic, twinkling, the music draws close images looked at from afar. It also unifies scenes remembered, in a sense dulling contrasts, forgiving long-past sins and lightening moments of great pain. Though a project of recollection and recreation, A Time to Live and a Time to Die is, as its title suggests, as much about life and resilience as about what’s gone and regretted. Even those scenes of adolescent stupidity witness a full-chested vivacity in Hsiao, as well as an increased stirring of maturity. Though the mainland hovers like a ghost for his family, he’s furiously engaged, for better or worse, in the here and now. He may or may not be haunted by where and what’s been left behind, but his reality is Fengshan, Taiwan, and there’s a life to be explored, or squandered or pressed forward. Hsiao takes notice of a quiet young woman, following her home on his bicycle and watching her from a distance. Their only conversation consists of the girl telling him to pass his school exams, a challenge and promise of sorts to earn her affections. At the end of the film Hou’s voice-over tells us that he failed those exams, and never saw her again. Yet Hou doesn’t show this. Instead we see Hsiao biking away from her, peddling faster, suddenly hopeful and aspirant.

I’m reluctant to write about the final shot of A Time to Live and a Time to Die, because what’s shown, as well as the complex of feelings it elicits, deserves the 135 minutes of exquisite lead-in. Suffice it to say that Hou brings the camera unusually close, and the image, hard as it is to bear, folds life into death, the physical with the ineffable, Hsiao’s witness into ours, memory into film. For what passes also remains, changed but still real, and that what seems present and alive is already, slowly and quickly, witnessed or ignored, passing away.