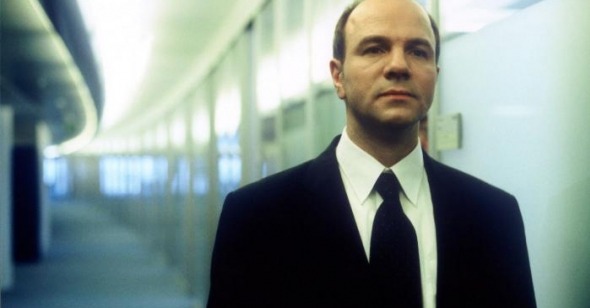 The Great Escape
Julien Allen on Time Out

The film opens with a man in a suit, asleep in his car. He is woken by his cell phone ringing. Perhaps he’s a salesman with a long shift, who had to push on through and couldn’t get to a hotel in time? His immediate actions—dawdling over breakfast in a roadside café, gazing at children playing—disavow any such urgency. And when he speaks to his wife on the phone, he implies he is between important meetings. Before long it becomes clear: he’s bumming off work. Why? Later, it becomes clearer still. He doesn’t have any work. He’s lost his job. Furthermore, he hasn’t told his wife and family—and has no intention of telling them. From this simple, yet gently devastating premise, comes Laurent Cantet’s Time Out (2002)—a gripping reverie on deceit and perhaps one of the great films about that most unfashionable and universal subject: work. Having endured many years of the rat race first hand, I was overwhelmed on first viewing by its subtle observational power and the lyricism with which it cloaks its rage. I have never been able to get Time Out out of my head: I keep revisiting it, I see it in other films—it’s like a flickering firefly, which, after a decade of life, refuses to go out.

Cantet expropriates aspects of the tragic true story of Jean-Claude Romand (sort of a French Frank Abagnale Jr, but one whose last act as a free man was the murder of his family), and places them on the shoulders of an everyman, Vincent (Aurélien Recoing), whose decision to shy away from the narrow path of life is prompted by his sacking from a middle management job, details of which we are never given but can grasp with little effort. Inventing himself a grand-sounding position with the United Nations in Geneva, he drives to a secluded and abandoned cottage in the Swiss Alps, paying occasional visits home to keep the pretense alive. Far more than a simple dramatization of a nervous breakdown (such as Joel Schumacher’s Falling Down), Time Out presents Vincent (though deceitful and fraudulent—he sets up a Ponzi scheme to create the income needed to keep this existence going) as a man released from bondage. This counterintuitive, almost celebratory approach to what will seem to most of us like a form of self-inflicted torture, is illustrated by an early scene where he drives, beaming, alongside a train and attempts to outrun it. By concentrating less on the pathological aspects of Vincent’s behavior and more on the crushing weight of the trap of work, the pressures and hypocrisies of which have taken him to the edge, Cantet turns the story into a trenchant plea for liberation from salary servitude.

Because the film wastes no time in plunging us straight into the intrigue—and avoids the use of flashback—we are simply left to piece together in our own minds the various elements that could push a man like this to step off the grid. And it doesn’t take an awfully big leap of the imagination: as a father of two, he has become, like so many of us, defined by his work, and he believes (wrongly, as it turns out) that his friends and family value him only by reference to his abilities as a professional and as a provider. When the job disappears, the bottom drops out of his life. Nothing about his escape plan suggests it can succeed, but Cantet puts no policemen on his tail: it’s left to the pervading sense of threat which comes from life’s inevitabilities to pursue and ultimately engulf him.

Perversely, one of the most destructive and frustrating obstacles to Vincent’s well-being is his rejection of the palpable love and support offered to him by his wife, Muriel (Karin Viard) and father (Jean-Pierre Mangeot), whose attempts to reach out to him (they can tell something is wrong even if they cannot imagine what it is) he finds oppressive, instead of comforting. Cantet lets us see very clearly that Vincent will not compromise, but refuses to add his voice in support of Vincent’s stance: as in his previous film, Human Resources (which deplored the work-place imprisonment of those on the factory floor), the tragedy is less in the destruction of a man than in the disintegration of a family. While we share Vincent’s predicament, we feel Muriel’s pain.

Cantet’s script (written with Robin Campillo) persistently presents Vincent with opportunities to reassess what he is doing, not least in an agonizing encounter with a musician friend who (by choice) has a more humble and freer existence than Vincent. A horrified Vincent finds himself embroiling his friend (and his meager savings) into the Ponzi scheme. Liberated and emboldened by the short-term success of his doomed odyssey, Vincent ignores or rejects those voices that call on him to turn back. He is seduced instead by an encounter with Jean-Michel, a black-market entrepreneur, played, magnetically, by Serge Livrozet—an actor whose sheer abstruseness is disarmingly reinforced by his never having acted in a feature film before or since. There has been talk that he might be a real gangster.

What Cantet films so penetratingly is uncertainty. No element of the script or direction allows itself to follow a formulaic course (such as a Hollywood adaptation might choose), to lull either the protagonist or the audience into comfort or familiarity. The captivating music (provided by a small string orchestra) is by Jocelyn Pook (an ingenious choice, so mesmerizing were her chimeric cadences in Kubrick’s Eyes Wide Shut). Vincent’s encounters and his reactions to them are unpredictable, and our acute unease (from our recognition of his anxieties and our dread of how such a story must play out) is tempered by a sense of ethereal distance: we can understand what Vincent is going through, but we can never quite understand Vincent himself. He may be closer to us all than Frank Abagnale is, but Cantet’s use of hyperrealism exaggerates the idiosyncrasies of Recoing’s performance—in the image of Recoing’s own utter physical ordinariness, Time Out rejects any aesthetic composition that could reasonably be interpreted as pleasing to the eye. At times, Recoing seems to be thinking of nothing, then he snaps back into our frame of understanding with a line or a smile—he drifts in and out of our sympathies. So pale as to be almost transparent, he becomes like a ghost, haunting a world to which he has never quite belonged, and from which he is never quite able to escape. When night falls, the audience experiences a frisson of anxiety, as if the dark were momentarily protecting the fugitive and hiding the threat (witness the scene where Vincent walks in the grounds of the school while his son participates in an evening judo class inside the classroom). A rare, standout sequence of real aesthetic power in the film involves Vincent and Muriel, having spent the night in the cottage, so that one imagines Vincent may be on the verge of confessing. They are walking in the mountains as the fog closes in. He turns and she is gone: he panics and screams after her. After what seems an interminable length of time, he finds her, looking out into the void (just as we have seen Vincent do time and time again). She turns and smiles, beautifully, at him: “Did you think you had lost me?”

Cantet’s mission, common to nearly all his work—from his startlingly direct piece of agitprop Human Resources (which seemed to have graduated summa cum laude from the Loach-Guédigian school) through Heading South and The Class—is one of the noblest cinema has to offer: to give a voice to the unheard. He points his camera at the hinterlands of society, the unfashionable and the awkward; his protagonists are ordinary people with little or no heroic dimension; he lights not the obviously dramatic dark underworld, but the gray, the bland, and the drab—and brings them sharply into focus. Vincent, at best a modern-day version of Melville’s Bartleby, is far from a brilliant con man—and his tale is a genre or two away from the audacious capering of Catch Me If You Can—but Vincent succeeds (in part) because what he is really doing is what most people do when they are actually working: he is faking, selling, persuading. The subtlety of this indictment is remarkable—the reason we don’t need to see the job Vincent used to do, is because it would too closely resemble the fake job he is (not) doing now.

One might reasonably expect a film such as this to end in a mass murder (as in the real Romand affair) or, more predictably still, a suicide (the penultimate scene seems to show Vincent disappearing into the dark, just as in the climactic sequence, Muriel disappeared into the fog). But Cantet has far worse in store for us. From the anxiety of the darkness comes the horror of broad daylight, as we are presented with a final coda to freeze the blood. Cantet has shown us with Time Out that cinema has the capacity—more than any other medium—to transport us, through the looking glass, into reality.