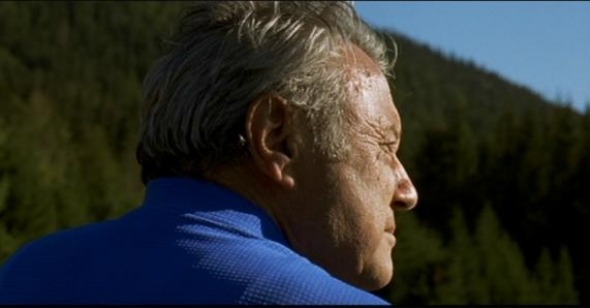 Claire Denis’s L’Intrus takes its title and inspiration from a short book by French theorist Jean-Luc Nancy. This is not the first time Denis has riffed off Nancy’s work, or vice versa: previously, Nancy wrote responses to both Beau travail and Trouble Every Day; then, for the omnibus Ten Minutes Older: The Cello (2002), Denis made Vers Nancy, a short documentary in which Nancy, on a train, discusses the politics of the outsider with an immigrant French woman. But L’Intrus—and Nancy’s follow-up article in the online journal Remue—takes the dialogue between filmmaker and philosopher to another level. As an essay that is part autobiographical rumination on the author’s decade-old heart transplant, part metaphysical speculation about the intervention of science on the human body, Nancy’s source material makes for a strange sort of adaptation, one that does not readily lend itself to cinematic storytelling. As we’d expect of a dense, poststructuralist text, there are few concrete images. Instead we get a motif: a missing heart. It’s less described than palpably felt, a shared sensibility of estrangement and longing that is woven through both film and book, the sense of something departed, a familiar ache.

Where, then, do Denis’s images come from? Her cinema, so often praised for its lush, visceral textures, is replete with bodies pictured unnervingly up close in disorienting, disjointed places, and L’Intrus is no exception. Following the journey of the largely inscrutable Louis Trébor (Michel Subor), the film travels to far-flung destinations—from France’s Jura Mountains to Geneva, Korea, and Tahiti—as he purchases, implants, and ultimately rejects a new heart, all the while seeking a lost illegitimate son. The route mimics the year-long one taken in preparation for the film by Denis, who was drawn to the South Pacific for the way it symbolized an arcadian refuge for so many writers and artists, the imagined antidote to the malaise of everything familiar, a place so different from home. Along the way she gathered traces of Paul Gaugin’s tropical mirth, Gustave Courbet’s forest grottos, and Robert Louis Stevenson’s diseased drifters, whose images and itineraries are suggested in the film’s sweeping land and seascapes.

Yet these, too, are turned inside out. Denis’s Tahiti, which pits idyllic beaches alongside shopping centers and construction sites, is a far cry from Gaugin’s festive oils or the gleaming young bodies in F.W. Murnau and Robert Flaherty’s Tatu (1931), suggesting that the past Louis seeks, and the one imagined on and through film, may no longer exist, if it was ever there at all. The real Tahiti remains a place in the mind, a question left open as the film makes its dizzying geographical shifts. Like a fishing net cast in the water, L’Intrus jumbles together all its locales, both real and imaginary, offering little sense of order, or even so much as a backward glance. Underscoring this sense of ambiguity is Stuart Staples’s spare and perpetually unresolved score that fills the film’s long, wordless passages.

L’Intrus, with its loose ends and fleeting imagery, has been criticized for its formal impenetrability. Yet its poetic, elliptical structure is less a generic marker for highbrow auterist cinema than a narrative necessity. As Denis has suggested in interviews, all of the film’s visions can be regarded as belonging to Louis: what he sees, or what he thinks he sees. Everything is a part of him, in a sense, but his sight, his self, is fractured. Like the multiple passports tossed into a fireplace, a real son, Sidney, (Grégoire Colin) traded for a phantom one, or his own missing heart, the traces of Louis are scattered and lost all over the world. Home may be where the heart is, but in L’Intrus, there is no heart, no home. Instead, Denis presents the self as a “montage,” as Nancy describes, a series of fragments, scenes, and sounds that, like the parts of the body, amount to some kind of heterotaxic being. L’Intrus is a film as nothing less than the experience of living. We know little about Louis—where he comes from, how he obtained the privilege that grants him access to high-powered shipbuilders and black market organ dealers—but as we see through his restlessly scanning eyes, and feel ourselves urgently propelled by his sickly heart, we know him nevertheless.

While Louis recklessly intrudes on others, coldly stiffening against the affections of his pharmacist paramour or arriving unannounced at the island haunts of an estranged friend, the film also intrudes on him, his thoughts and memories, and above all, his sense of touch. Denis’s films are more than sensual, but sensations of something close, perhaps too close. The vague discomfort we feel when Louis traces the deep scar along the length of his chest can be attributed to Agnès Godard’s sinewy camerawork, which holds fast to actors’ bodies, frequently moving, and in L’Intrus, often across borders. As with Trouble Every Day, we’re pushed right up to the surface of the skin: all the pores and pockmarks of a weathered life are exposed, and despite his gruff obstinacy, Louis is often naked in the most vulnerable sense of the term. Though Denis isn’t one for psychological realism there’s an unyielding contact that’s intimate nonetheless. We get inside, not because we’re invited to, but because the film demands it.

Here we get to the heart of the matter, the film’s core—which Nancy reminds us translates as coeur, or heart, in French—the strangeness lurking within, an intruder already present not just in Louis’s newly implanted organ, but in every one of us. It is the part of the self that is buried deep: our hidden desires, the things we didn’t know we were capable of. At the beginning of the film, an anonymous Russian woman (Katerina Golubeva) speaks in low tones, offering a précis of Nancy’s text: “Your worst enemies are hiding inside, hidden in shadows, hidden in your heart.” She is the one who, with a weary smirk, arranges for Louis his new, illicit heart, which will claim a new life just as it reinstates his. She is also death personified, hounding his every step in breezy skirts and a trail of cigarettes. Knowing that the new heart will not take, she watches and waits; his past will catch up to him soon enough.

Like the Russian woman, L’Intrus furtively tracks Louis, glimpsing his erratic movements in fragments, and catching much in between. The camera is alive and devouring, lingering on the nape of a woman’s neck as she ties up her hair, or studying the crumbs across the table in Louis’s secluded cabin. The film can be frustrating for the way these details don’t seem to add up; characters come and go, most of them unnamed, and appear as little more than embellishments of the landscape. Yet in a broader sense, this vivid assortment of images relates to the obscurity surrounding Louis, who as the main figure, is also the most elusive. What little is revealed of him comes externally, in the colorful and erotic play of textures he encounters, dreams, and most importantly, remembers. Without a heart, without anything inside, this is all that is left of him.

After having arrived at a remote island, Louis sets up a makeshift home in which to receive his long-lost son (the Tahitians, meanwhile, hold an audition to see what native son might play the role of his heir), and sea-visions of his former self begin to appear, or rather, intrude: a young Michel Subor, drenched and despairing on the deck of a ship in Paul Gégauff’s Le Reflux (1965), itself an adaptation of Stevenson’s The Ebb-Tide. In Gégauff and Stevenson’s versions, a small band of men drift from island to island on a quarantined ship, cursed with illness and never allowed to disembark. Both the young Subor and Louis glimpse the palm-lined shore, perhaps the same one spaced forty years apart, but neither stay for long. Before his son has a chance to arrive, Louis’s body begins to reject his new heart, and he’s transported first to a sterile hospital bed then a cargo ship whose destination is uncertain. As he floats away on an electric purple sea, Tahiti grows ever distant and dim. For him and for Denis, who knows from her own upbringing in colonial Africa the eternal condition of the exile, it is a shore that can never be reached, a fragrant dream that has already begun to vanish.

Both Nancy’s book and Denis’s film reach the painful understanding that the intruder is ultimately the self, not the new heart, but the one that was lacking all along. “A Man with No Heart,” or so the film’s working title describes: Louis is a heartless man, cold, like the deep-red heart resting on a firmly packed layer of snow, a metaphoric image that Denis lays violently bare. From his dogs, with their soft bodies, to Sidney, whose eyes flash a moment of defenseless anguish, he spurns anyone who shows him kindness. He takes hearts and rejects them, always drawn to the promise of warmth, but never able to feel it. All he can do is imagine the kind of moment captured in the film’s most breathtaking, most heartrending shot: a sleeping infant cradled in a sling as Sidney steps swiftly through the tall grasses of a Jura valley. Amid the fury of adult steps, the child, who, poignantly, has been named Louis after his grandfather, slowly awakens and smiles up at his father in the late-day sun.

Gégauff abandoned Le Reflux without completing it, and Roger Vadim, who appeared in the film, later took it upon himself to end it with a voiceover by Subor. Though he has fallen in love with a Polynesian woman who pleads with him to stay, Subor’s character refuses. He is, as he sadly describes, “doomed,” forced to reject the heart that’s been given to him and condemned to return to the sea. Half a lifetime later, Louis is still leaving every place he encounters. At the end of L’Intrus, visions of the Jura return in a wildly robust sled-dog romp led by the Queen of the Northern Hemisphere, played by the resplendent Béatrice Dalle. This might have been his home, or a dream of home, but the moment does not linger. Louis, we imagine, is already elsewhere.