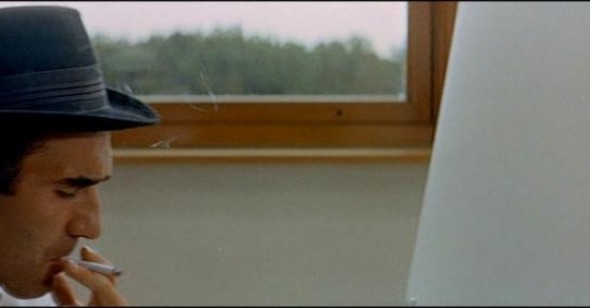 Let There Be Light
Marianna Martin on Contempt

Perhaps it says too much about my own views on film, but I really admire Jean-Luc Godard’s game of entrapment with his audience, of leading them to expect some profound and symbolic “European Art Film” payoff, only to be told that this or that image could mean a lot less—less than nothing—and deliberately so. True, perhaps, this is the elitist glee that can make cineastes so unpopular, but I like to think that Jean-Luc and I are sharing a chuckle at the expense of the most patronizing of my peers. I simply cannot resist the directorial gesture tantamount to giving all of cinema, and the audience, the finger.

When I first saw Contempt (1963), in the indulgent viewing privacy of my home, I actually shrieked aloud when I realized just what Godard was doing to escalate the frustration level in the sequence at hand, one which Haroun Farocki has remarked as “one of the longest scenes in cinema… shown in something like real time.” If you have not seen Contempt or need a refresher, I ask you to imagine an argument between your two most pretentious acquaintances, preferably ones who are sleeping with each other. Good. Now imagine that argument on heavy sedatives and with massive short-term memory loss. Excellent. Now add a claustrophobic apartment, divided into tiny rooms and hallways, in which to stage this argument for nearly three quarters of an hour. By now, it barely matters that one of your pretentious acquaintances is Brigitte Bardot, wrapped in petulant ennui much like the giant red towel that nearly obscures her from view.

If you are Jean-Luc Godard, you naturally shoot this entire sequence in CinemaScope. After all, director Fritz Lang (starring here as a director seeking to make a “pure film”) once said that CinemaScope was only appropriate for “snakes and funerals,” so what better format for filming a set that offers no vista (unbroken by strong vertical lines) wider than about a meter? Indeed the strong vertical lines present throughout these compositions are particularly susceptible to the strange optical distortions that make the edges of the frame appear to bow outwards.

A tiny apartment, a tedious argument, a strong vertical slashing of the compositional frame perversely emphasized by the unconventional—to put it mildly—use of a new, expensive, wide format. Surely Godard must have, at this point, exhausted his bag of tricks in confusing/discomfiting the viewer. His beloved Brechtian distanciation has been accomplished: we start to not care about the characters, feeling trapped with them and their petty, numbingly boring fight in the apartment that seems all the smaller for having so much of any one axis of it revealed at a time. And things only worsen when they sit down on either side of a low table with a lamp in the middle of it, to continue to bicker and whine at one another.

That Goddamned lamp. It is the secret star of the film, and this shot proves it. It sits there, in the middle of the frame, and as the new shot begins, Paul (Michel Piccoli) to the left and Camille (Bardot) to the right, we see the lamp’s shade in close-up. The camera tracks to the left, zooming out a bit to show Paul in medium close-up continuing the spat, then tracks right, back to the lamp, lingers there a moment, then tracks further right, so that Camille is framed much as Paul was, and then back to the lamp. As Paul and Camille argue, this movement is repeated without cuts three more times, changing in tempo and gradually accelerating in no apparent relationship to dialogue. All told, this lasts about two-and-a-half minutes. The camera becomes detached from conventional narrative attention to character, and is quite analogous to the spectator’s wandering attention. This shot announces, “Bored yet? You should be, for crying out loud!” The camera itself is bored. How can a camera even be bored, or express boredom? This movement neither matches the action (by focusing on who is speaking) nor provides a reaction shot for the party being spoken to. By acting as the fulcrum of movement in the shot, the lamp attains equal importance (or unimportance) to its human co-stars, and has the added benefit of not making any annoying contributions to the repetitive and accusatory dialogue. Like he had done with the shot comprised of two complete 360 pans in Weekend, Godard removes the camera from implication in the action through this in some peculiar, ritualized way. It is Godard who is forcing boredom on you, Godard who is taking full responsibility for the effect of his narrative and characterizations. The camera, like you, would like nothing better than to find something else to look at. The agency that this gives the technology of film, and the resulting radical realignment of the technology with the spectator, 180 degrees away from its conventional alignment with the director, is all the more shocking for being slipped so casually, so sneakily, into a moment of profound, skull-bludgeoning inertia. This is a complete overturning of one of our basic assumptions about cinema—the camera works for the director—and it arrives not with a bang, but with a yawn.

You might get the wrong impression. The more negative, backhanded compliments I heap onto this film, onto this shot alone, the more I grouse about the dialogue and the woodenness of the characters—that they could be upstaged by a mere prop—the more I am praising it. By elevating the table lamp to the status of the leads in this shot, Godard achieves complete synecdoche, and fully realizes his rejection of everything he was given to make this film. He did not want the most famous derriere in cinema (Bardot’s), he did not want to film a nude scene, and he did not want a film that had CinemaScope imposed on it by the studio, for no reason of suitability other than the dubious theory that the aspect ratio itself confers some sort of extra value on a film by virtue of its novelty and expense. In the footsteps of Max Ophüls—a director Godard admired—and his veritable orgasm of cinematic perversity Lola Montes (1955), Godard faithfully follows the older man’s recipe for how to create a brilliant “anti-film” out of the ingredients of the film the studio wanted him to make. As Ophüls neutralized the soft-porn aura of Martine Carol by making her ridiculous, Godard refuses his spectators Bardot’s naked body, wrapping it in bulky red toweling, and giving them instead a naked lamp. Ophüls sabotaged his CinemaScope by employing constant camera movement amongst “narrow” compositions, and Godard seems here, in this shot, to be paying homage to Ophüls, letting CinemaScope track back and forth in a seasick fashion when he could easily have framed all three “principals” in one shot. A shining star is born.