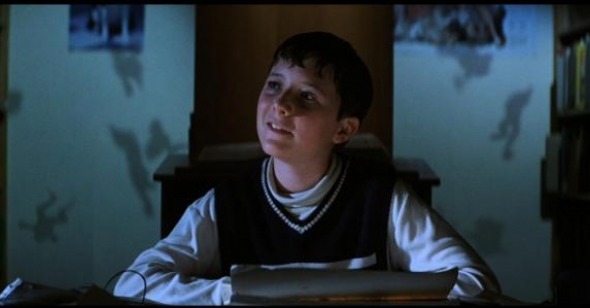 If the nineties were watershed years in American filmmaking, it was also a decade of intense absorption for the American filmgoer. In this age of innocence, good taste too often trumped good intentions; hipsters like Kevin Smith could be celebrated for irreverently commenting on society, but any director who dared to provide solutions did so at the risk of critical crucifixion. From this context, Paul Thomas Anderson emerged as the Madame Olenska of his generation. But it wasn’t Anderson’s flamboyance that revolted the crowd. Audiences could forgive the filmmaker for his cinematic flourishes in Boogie Nights, as long as his subject matter (pornography, in this case) provided an outer layer of detached irony to satisfy the sardonic palate. In their eyes, the closing shot on Dirk Diggler’s moneymaker was simply too outrageous to be considered offensive. But then came Magnolia, and suddenly art-house viewers of America turned on Anderson with a collective eye roll.

As in Boogie Nights, the director was again showing off with fancy tracking shots, citations of Samuel Johnson, and a rarefied soundtrack, but this time around there was no irony to offset the technical hubris. Instead, Anderson had a message to deliver and he was doing it with the kind of unwavering conviction that would have made Edith Wharton blush. Society had fallen deathly ill and it was time to confess, to repent and, above all, to forgive.

But what exactly was the sin, and who committed it? A sequence of tracking shots cut to the rhythm of Aimee Mann’s rendition of “One” introduces Magnolia’s plagued people: The LAPD officer, the coke head, the game show host, the kid genius, the middle-aged former kid genius, the gold digger, her terminally ill husband and, of course, the self-help guru. As the film reveals, these characters are not disassociated archetypes, but rather, a community of tenuously connected members on the verge of full-blown diaspora. Their sin is miscommunication, and for it, they’ve been cursed to wander in a suburban wilderness of prescription drugs and bad television.

Depicting such decay became something of a convention towards the end of the nineties. The Ice Storm, its bastard stepsister American Beauty, The Sweet Hereafter, and even Boogie Nights dealt with similar themes and, like Magnolia, placed the blame on the breaking of familial ties. But while all of these films rushed to diagnose the problem, Magnolia was unique in its commitment to solve it. It’s prescription—confession, compassion and, of course, biblical plagues—noted the pattern of decline while at the same time calling for its end. An end to the suicidal Dads, the hysterical Moms and their fatalistic children; instead we had characters capable of conversion, people who were going to change for the better whether they wanted to or not.

Perhaps the film’s most vivid conversion is that of Frank T. J. Mackey, the misogynistic self-help guru, who goes from victimizer to victim. In a bit of self-mockery, Tom Cruise plays Mackey as the bulletproof ladies man whose leather waistcoat and samurai pony-tail bear an intensity at once vulgar and priestly. His “Seduce and Destroy” seminar, meanwhile, is best described as a religious experience for the sexually inept. One moment Mackey is commanding his flock to “Respect the cock and tame the cunt” in fiery jeremiads against satanic forces like “Denise the piece,” the next he kneels beside a parishioner to hear confessions of sexual failure. While the caricature plays for laughs, Mackey takes his mission very seriously. And rightly so. Despite his woman-hating (or actually because of it), Mackey is bringing people together to share their feelings, and this makes him an endangered species in Magnolia’s social landscape.

Mackey runs into quicksand when he heads backstage for a television interview and loses his composure under questioning about his past. When the journalist corners him on the death of his mother, Mackey is forced to acknowledge a scarlet letter of sorts, one that threatens to undermine his dogmatic teachings. But like Reverend Dimmesdale himself, Mackey reserves his confession for the flock. He rebuts the television interview, retakes the stage and launches into a sermon that gradually devolves into a deranged admission of guilt. Directing his gaze into the spotlight, Mackey swoons at the pulpit: “You see what society does? Little boys, it’s.... [whispering] “wow, woman!” Yeah, we are taught to apologize. “I am sorry. I am so sorry, baby. I am so sorry.” What is it that—What is it, huh? What we need. Is it their pussies? Their, uh, love? Yeah, mommy wouldn’t let me play soccer, And daddy, ooh, he hit me, So that’s...that’s who I am? That’s why I do what I do? [chuckles] Fuckin’ bullshit.” Since Mackey’s “apology” takes place on stage, and therefore under the auspices of a performance, it’s hard to know where the “fuckin’ bullshit” ends and where the confession begins. At no point in the sermon does Mackey stray from the language of Seduce and Destroy, and yet its message now betrays him and sows doubt in his audience. Mackey’s flock watches their shepherd stumble while we, his greater audience, sense that Magnolia’s Mercutio is slowly bleeding to death. Cruise has chipped away at his caricature to hint at tragic relief, but at this point the artifice still remains intact. Are we seeing the real Frank T. J. Mackey, or is it just an act, a rhetorical parenthesis in Seduce and Destroy’s healing process?

Herein lies the film’s central conflict. Magnolia is, if nothing else, a story of people struggling to depart from the kind of rehearsed language that insulates their egos and actually say something candid. That is why much of the film’s dialogue consists of characters talking around one another in clichés (“Be cool, stay in school” “It’s raining cats and dogs out there”). Magnolia’s suburban sprawl, in this sense, acts as a latter-day Tower of Babel, in which everyone speaks the same language, but no one communicates. At the tower’s foot are the children (the wiz kid) and those incapable of small talk (the coke addict), while its highest levels are occupied by the smoothest talkers: the game show host, the TV producer and, of course, Frank T.J. Mackey, who attains godliness through his command of the Seduce and Destroy lexicon.

That Mackey should eventually falter and deliver his stump speech in the form of a prolonged Freudian slip is but one of many signs that this tower is collapsing. And by the time the heavens open and unleash a frog storm of biblical proportions, its demolition is complete. Those who would mistake the storm for a lame gimmick or a half-baked attempt at breaching the fourth wall are missing the point. The plague, while jarring, doesn’t happen out of context. It is a punishment of absurd proportions that nevertheless fits the crime. All the talk of imminent weather shifts, of “cats and dogs,” all of the babble in general, finally comes to a head. With the streets awash in dead frogs, small talk is no longer the order of the day. From here on out, people must speak candidly or not speak at all. Perhaps ironically (or inevitably) nearly anyone seeing Magnolia for the first time, comes away from it babbling, replete with finger-wagging, quick dismissals, and canned critiques. But amid this cacophony there is also a good deal of silence, which is probably the best review Magnolia could hope for.