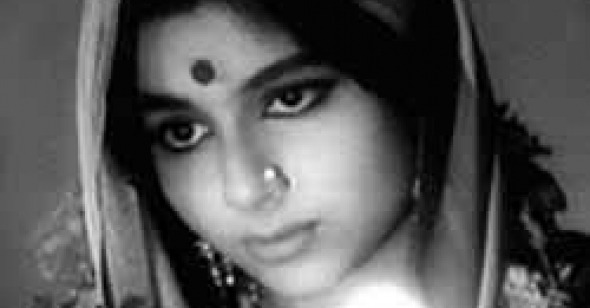 What does a god look like? A dream convinces the feeble patriarch in Devi that his doting teenaged daughter-in-law Doyamoyee is an incarnation of mother-goddess Kali. Before long she sits on a pedestal, the object of prayer, amid the din of festive bells and haze of incense, a procession of supplicants eventually winding to the horizon. She is the center of attention and activity, like the Kali statue of the film’s opening. She passes out.

Satyajit Ray’s 1960 film Devi is a humanist work, but its interest in what exactly we do when we look at someone or something almost fragments the emotion we feel in watching it. From the opening credits, vision is an additive faculty: after a few moments the head of a statue behind the text gets an eyes and mouth. In the fateful deifying dream, three floating eyes are superimposed over Doyamoyee’s baby-fat face in tight close-up. Misty lighting, bed netting, even bars occlude other sequences, as if the extra work of recognition and getting bearings is to invite a space for fabrication.

Longer takes of the young woman come later, but the first shot of the freshly consecrated young woman, her chin trembling, sets the beneficent yet reluctant pose that recurs throughout the movie in similar close-ups. Head slightly bowed, she demurely peeks from under her head covering. When she did so while massaging her father-in-law’s feet, she was respectfully looking down, even as he flattered her about her generosity. Now, a few feet off the ground, she overlooks those that came to pray, looking (and sometimes lit) a bit like a Western Madonna.

Our perspective in the shot is essentially that of those praying, and it’s the first time we see her face since her father-in-law threw himself at her feet to make his declaration (during which she turns her face away). What’s riveting about every time she appears, from this shot on, is the mystery of perceiving the character’s divinity. Faith becomes an open question, one that Ray encourages by showing us the specific origin of the belief (doesn’t every belief start somewhere?) and showing sympathetic doubters, like her husband (Soumitre Chatterjee), who returns early from university in a panic, or her sister-in-law who also lives in the huge house and avows disbelief in incarnation.

It’s an unsettling, questioning gaze we feel ourselves assuming, especially asked to direct it at so unlikely a vessel. The actor is a 13-year-old Sharmila Tagore, not Maria Falconetti, and physically her Doyamoyee evokes a shy teen petrified by all the attention and holding still either idol-like or in the hopes everyone might just forget about her and leave. Tagore, here at the dawn of a long career, has described the performance with a relevant sense of relinquished agency: “Devi was what a genius got out of me, not something I did myself.”

Doyamoyee’s fragility and uncertainty are not, as in other religious tales, incorporated into the story of her suddenly divine existence. Unlike Christian passion scenes, her encounter has no place in this depiction. The juggernaut of faith rolls over her, or who she was (or was becoming), and that indomitable eclipse of the individual unleashes our welter of emotional response: pity, love, fear, maybe even a suspicious hate if she’s seen as pretending to this divinity. Certainly her sister-in-law, who must submit her sick son they both raised, feels all of these things, but most of all helplessness, when even a doctor refers her to the deity in the house.

Where Joan in The Passion of Joan of Arc was persecuted (and prosecuted), this girl would have to convince the devout otherwise; where Joan was absolutely certain, this one is terrified by doubt. Doya’s predicament is to be too well locked into the framework of her society, held in this position by religious imposition, the weight of which you feel with every iteration of this shot. The terrible irony is that she seemed content in her original role of mother-caretaker, who looked after her father-in-law, nephew, even a parrot. Now, as mother-goddess, she is segregated from the family even though she remains in the house, and is expected to heal her nephew with her supposed powers instead of comfort him. The boy’s mother asks, because in Pascalian pragmatism she must, “Are you the goddess or not?”—as if she could circumvent all this nonsense, momentarily step outside the set roles, and get at some material truth in the matter for her son’s sake.

But the near-classical force of the tragedy is that Doya can do nothing (even as the most widely disseminated proof of her divinity was her apparent healing of a beggar’s child earlier). Recall now that we get to Devi immediately after Ray’s renowned Apu trilogy, which showcased his ability to imbue shots with familial warmth and trace sentiment with a skill compared to Renoir’s (and which starred both Tagore and Chatterjee). Here instead is a woman pinned in the film frame, her human love drowned amid large-scale religious fervor. She ends, in the final shot, fleeing in a mad diagonal into mist, disappearing into the nearly overexposed white light, lost in the divine blast to husband and family alike.