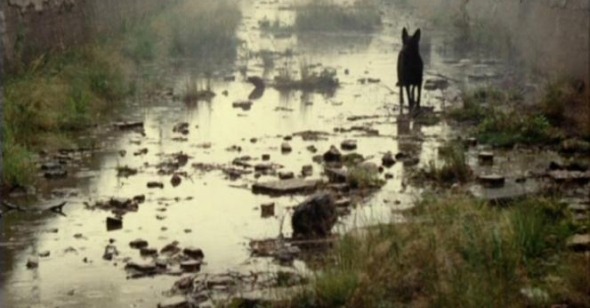 In the Zone
Eric Hynes on Stalker

Jean-Luc Godard once declared that a tracking shot is a moral declaration, implying that all decisions involving the camera—tracking shots, close-ups, reverse shots, establishing shots—are moral decisions. Described by turns as poetic, spiritual, austere, difficult, personal, and visionary—abstractions that fumble to grasp the unwieldy—the films of Andrei Tarkovsky, and Stalker in particular, are nearly devoid of establishing shots. Shots in the film that might serve to establish are notable for their illegibility. In Stalker, frames—of doors and the camera—truncate the picture and elevate the unseen. Rather than comfort, his camera wants to unsettle, to set our limitations, to suggest more. Common are shots of near-microscopic closeness that pan to accumulate, and close-ups that pull away to reveal. To get at the heart of things, he never starts from without, but from within.

Watching the characters march around in Stalker feels oddly similar to watching the spouses stomping, slamming, and embracing about the house in John Cassavetes’s A Woman Under the Influence or Faces. By keeping us so close to the characters, these long and deliberate films never waver in treating them with dignity, never step back to diminish them or reduce our complicity. It’s this relationship to the characters and to the camera that makes for dizzying, frankly confusing, physically involved, and psychically evocative viewing. Stalker compounds matters in that the journey undertaken by its characters is explicitly spiritual, but what they seek and what they find is always contradicted, ambiguous, unwieldy.

Andrei Tarkovsky’s fifth full-length film, Stalker is loosely based on a science fiction novel called “The Roadside Picnic” by Arkady and Boris Strugatsky, who also collaborated with the director on the screenplay. After adapting the story and shooting the film, a tragic gaffe in processing destroyed the negatives, and Stalker was entirely remade. According to Tarkovsky, Stalker’s final incarnation bore only a skeletal relation to its source material. While his previous sci-fi film, Solaris, required him to acknowledge the otherworldliness of the story and its setting (which the filmmaker felt was a distraction), Stalker is grounded, literally and deliberately, in earthly soil. That the setting is both strange and familiar shows how well Tarkovsky capitalizes on our expectations of foreignness, making of the mundane something new.

The plot, in brief, involves a guide—the Stalker—who brings two strangers, whom he archetypically calls “Writer” and “Professor” (personal names are avoided) to a forbidden territory called “the Zone.” Central to this overgrown, abandoned terrain is a hollowed hovel with a room believed capable of satisfying a person’s deepest wish. Action transpires during daylight hours of a single day, bookended by the Stalker’s departure from home and his return to wife and child.

Beyond establishing shots, Tarkovsky eschews their narrative correlatives, beginning the film with an opening scroll of uncertainties and ellipses. “What was it?” a scientist asks, and after briefly recounting rumors about an asteroid and a missing army, ends, “I don’t know….” It’s as if Tarkovsky lets you look for the science fiction only because you’ll be hard-pressed to find it, even if it’s the very thing you think you’re watching. By expecting new worlds (bolstered by phenominally precise cinematographic textures that make shimmering bronze etchings of the Stalker’s humble home and shaven head), we see strangeness, only to discover that it’s strangely familiar. The characters react to their world similarly, treating the environment of the Zone as something foreign and dangerous while encountering little evidence of its being so. And just as we begin to question what we thought we were watching, the characters openly question, mock, and defy what’s expected of them.

Stalker addresses the human need for faith while operating outside of customary systems of belief. Outside of systems entirely, in fact. There are remnants, like the discarded objects beneath the stilled water, of religion’s representations, and the remnants in our character’s consciousnesses are similarly displaced, nostalgic, soggy. What I find fascinating, and at first disorienting, about the film is how iconographical it is while refusing to be representational. Even the most familiar objects and sounds are approached differently—what at first appears strange is actually recognizable, but looked at differently it becomes changed. For example, a close-up of the Stalker’s hand pans to the neighboring pool of shallow water in which a small metal object, half-embedded in the soil, catches light and glimmers for a moment. Some minutes later, during another pan over the cluttered water, a sibling of the object—a hypodermic needle—clarifies. But rather than disappointing our initial curiosity, the dirty discarded object has a new, undefined value. The object and its setting are suggestive of various things— civilization, life and death, blood and poison—but it’s treated democratically, among other drowned objects newly seen, frank and enigmatic.

But I can’t help looking for a system. Surely there’s something meaningful about these particular objects and themes. I fixate on hats. Both of the visitors begin with hats. The Writer loses his hat right away, when his female companion drives away with the hat on the hood of the car. The Scientist’s hat lasts longer, and disappears less ceremoniously. The Writer dons a crown of thorns at one point, declaring that he will not be forgiving anyone. The Stalker is bald throughout. Surely there’s meaning to these details…but there’s meaning in every detail. Tarkovsky isn’t interested in scattering symbolic moments through the mis-en-scène like bread crumbs for lost children—this would imply that the space between the signifiers is less important, and Stalker is too saturated for that. There’s equanimity to the film’s presentation of character, land, water, animal, object, place, picture, sound. Close-ups widen to alter, contradict, or complicate perspective, dialogue shares time with background noise and music, and tracking shots resist narratives of information.

The characters in Stalker are similarly unsettled, defying expectations imposed by self and others, taking turns reversing and contradicting, but never arriving where they began. At first the three men dutifully wear their assigned names, the Professor performing logically and empirically, the Writer chattering and mewling impetuously, and the Stalker silently guiding, reprimanding, and preaching. But as the day wears on truer personality peeks through. The scientist doesn’t mean to study or solve the Zone; he rather wants to act impulsively, heroically. The writer turns about the most, bunking his desire for inspiration, speaking of hardships, wishing for eternity but promising to drink himself to death, shuddering at the prospect of self-discovery in the room, then doubting the plausibility of the room’s power, and finally stepping back from the room, shaken. The Stalker leads, but hangs back, letting the others precede him. He speaks of the Zone’s power, of true, reverent belief, and of the simple desire of travelers to obtain happiness from the room, but he is clearly torn, nervous, fearful of discovery, and won’t enter the room himself.

The three men move through the Zone like children playing follow the leader, stepping into each other’s footsteps, mocking the leader, chastising the followers, inventing cockamamie rules as they go along, and incorporating as much of the environment as possible while taking the long way round. One step forward, two steps back. Going backward to go forward. Drowning everything in water to see what still shines. Approaching belief by fully mining disbelief. A trip to the Zone, a validation of its importance and existence if not of its power, and various recastings at various times of its nature. Ultimately the only thing sacred, the only uncontradicted element, is that of mystery itself. Forget belief or disbelief, the men stay outside the room to honor the mystery—of themselves and of the power of the metaphor. The final scene, the final, frank act of magic, reiterates this.

At first glance, the final shot of the film recalls the surprise miracle ending to Dreyer’s Ordet: the child defies logic and physical law by seeming to move glasses across the table telepathically. A film that hadn’t offered proof of higher existence depicts clairvoyance in the final frame. But like everything else in Stalker, the action is counteracted, complicated, suggestive rather than definitive. The child looks to us as much as to the houseware. The houseware moves jerkily, deliberately, at the same time as the frame pulls back, calling to mind a rough reverse zoom, this while the sound of a train overwhelms the soundtrack. The mechanics of magic. Like all magic tricks, the scene doesn’t ask us to consider the prevailing spirit of God, but asks that we both conjecture as to how the trick was accomplished (knowing full well that we’re being tricked), and delight in the illusion, giving up the power of reason for the moment. With Tarkovsky, in the absense of belief there are two states forever linked: disbelief and the suspension of disbelief. The Scientist and the Writer. Reason and wonder.

Like only very few works of art, Stalker inhabits life rather than recreating, mirroring, or quoting it. Which is why, despite its length and its quiet, I find it so easy to inhabit the film, with the sounds and the tactility of everything, the stomping about through grass and water, and the familiar ideas and opinions, both fascinating and banal, like music and noise. By the time they reach the room, the Zone is truly both terribly ordinary and distinctly spiritual—and the room itself merely a space but suggestive of more. Rather than a work about faith, or the faithful, or depicting faith, or even a work of faith—though in a humanist way I think it is—Stalker is the rare, fulfilled potential of the art of film: it is transformed by its viewer. Like the open stare of an icon, it has a different appearance, and a different meaning, with each viewing.