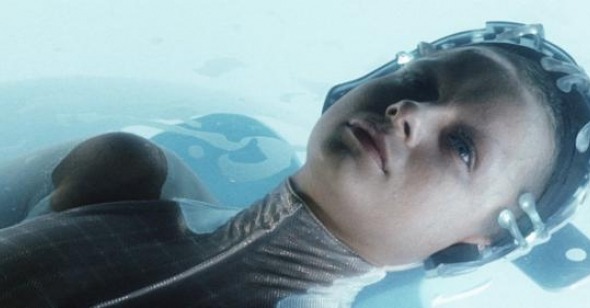 When watching pop movies of theological import, viewers tend to project their own allegory onto the screen—protagonists become religio-mythic stand-ins or a film’s themes are reduced to a specific perspective. Though potentially enriching, more often than not this analytical approach leads to a dead end. Most contemporary filmmakers hip to religion will readily proffer visual tropes and draw allusions in their work, yet will shy away from directly addressing them—they’re either too preoccupied with enhancing the overall spectacle at the expense of sincere metaphysical investigation, or more likely, have no clue as to what to make of honest spiritual signification. All too often, a filmmaker will hint at something deeper, yet because of his inherent distrust in images and words that bear the mark of the holy (however one defines that word), the film has no lasting effect. Popular films that have actual theological merit are rare—when it comes down to it, most directors are too timid to tackle the ineffable. Thankfully cinema has Steven Spielberg, a director who is as mindful of the transcendent as he is comfortable with the profane. His cinema is shot through with spiritual emphasis, but it is not of the common cynical sort. Often misconstrued as being lazily sentimental, Spielberg has increasingly produced work that has become not only more overtly spiritual but more nuanced psychologically.

Upon its release in 2002, critics and viewers alike were quick to identify the metaphysical quandary in Minority Report: the old free will vs. pre-determination paradox. Knowing that resolution to the question would be ontologically impossible to speak of, Spielberg presents the problem and says no more, which rather than copping out, evinces his humble understanding of the dilemma. Given the intellect/being differential between God and Man, it is likely and acceptable that human beings will never understand such a concept. Nevertheless, Spielberg demands that one grapple with this difficult doctrine for the film’s duration, rewarding the viewer with the rapturous thrill of the journey. With this theological concern providing the groundwork, Spielberg invites the viewer to look deeper.

Minority Report opens with distorted images of a murder prophesied by the precogs, the damaged children of drug addicts transformed by divine grace into visionaries who together make up the triune soul of the Department of Pre-Crime. In seeing the future, they make the word flesh and bear the burden of this transfiguring power: they see only murder. At first, it seems as if the precogs are deified because they prophesy, but it’s more complex than that. They can see the future, but the images they produce must be deciphered and then acted upon: their psychic ability only has value when the information is interpreted correctly and action is taken. They’re revered because they suffer. They pay a great penalty­­the real nightmares that violate their minds, the atrophy that imprisons their bodies­­so that the citizens under Pre-Crime’s jurisdiction can be free. Knowing this, one would assume that Spielberg’s making an allusion to Christ, but that’s not really what he’s after. As we learn later on, the precogs are fallible and so such a claim is rendered untenable. Then what are we to make of this? What are we supposed to see? Transcendent vision is the key motif in the film and in the first 10 minutes, Spielberg provides sufficient clues to locate the underpinning theology of the narrative: the precogs’ talent illustrates the beginning of the Gospel of John; Samantha Morton’s visage recalls Falconetti’s in Passion of Joan of Arc; Schubert’s Unfinished Symphony comments on the longing that torments Tom Cruise’s Detective John Anderton. All these signs point to a spiritual minority report, the suppressed information that carries with it ultimate judgment and freedom.

Soon after Anderton prevents the Marks murder, we’re introduced to Daniel Witwer (Colin Farrell), a former seminarian turned FBI Agent assigned to find flaws in Pre-Crime, who, upon seeing the precogs up close inside the “temple,” comments that they offer “the hope of the existence of the divine.” As a disciplined believer, Witwer sees the danger of ascribing holy attributes to a man-made creation, but at the same time understands that it signals the potential for divine jurisprudence. Anderton doesn’t buy it. He has faith in the system but not in that greater moral structure which it points to. To fill the emptiness in his life and form some sort of identity, Anderton gets high on the drug “Clarity,” watches old videos of his lost son and estranged wife, and keeps himself busy with his work. None satisfy his spiritual craving. Only when his faith in the system is tested­­when he himself is accused of murder­­does Anderton embark on a spiritual quest that leads to him to see the necessity for divine belief. When he learns of the corruption at the head of the Department of Pre-Crime and finally comes to terms with the fact that his son will never come back to him, he is devastated. The things by which he defined his existence collapse underneath him, leaving him uprooted but also primed for redemption. At the end of the film when Anderton loses everything, only then is his life restored. He gets his wife back and will soon be a father again. This hopeful ending disappointed many viewers and critics because for them, it seemed tacked on, unearned. But they weren’t up for Spielberg’s challenge: they did not look carefully and missed the hidden image that lends the narrative its spiritual significance.

The film ends with the precogs­­hair grown out, outfitted in granola duds­­reading, surrounded by stacks of books, inside a cabin situated on a small island surrounded by other small islands. This shot is distinct from all the others, visually and thematically: the steel blue of the urban jungle replaced with the autumnal ochre of the sun bathed archipelago; the dizzying camerawork and angles distilled to a single, elegant helicopter shot; the oppressive technology of consumerism exchanged for a rusty tractor. The image startles because it’s unlike anything else in the film. As edited directly from the shot of Anderton and his wife in their urban home, it’s a striking space-time jump reminiscent of those found in Gospel According to St. Matthew or The Last Temptation of Christ, in which miracles are illustrated through an abrupt cut, the transformation taking place in the empty space between the frames. In those movies, the agent of such change is unseen, but the images point to its existence. So too in Minority Report. Though the redemptive ending may feel disingenuous to some, Spielberg has been pointing to such renewal­­preparing the viewer for the poetic finale­­all along. Minority Report is about what is to come, not what is: it is a film that points ahead.

Though well-intentioned, the Department of Pre-Crime was a failure even before its inception because its progenitors rested their faith in the capabilities of visionary beings­­even going so far as to ascribe them holy attributes­­that despite their gifts, were merely human, thus susceptible to manipulation and error. Though misplaced, society’s faith in Pre-Crime represents the desire for a divine authority that brings freedom through perfect judgment. But there’s more. In his characterization of the precogs qua harbingers, Spielberg makes it clear that the divine authority will have to pay a tremendous cost, i.e. that there can be no deliverance without punishment. And maybe the most astonishing thing Spielberg has to say about this need for spiritual fulfillment is that satisfaction is already available­­you just have to be willing to see it. Anderton’s redemption is made possible only after his world is turned upside down, only after everything he believed in fails him. This authentic reflection­­the act of owning up to what you are­­ravages Anderton but in the end saves his life. As good a cop as he tried to be, he couldn’t bring justice: when Pre-Crime is dissolved, all the criminals are freed. When he is haloed and locked up in prison, Anderton’s a goner, but by sheer grace, his wife rescues him. Up until that point, Anderton tried everything in his power to justify his innocence to the authorities, but only through actions of someone else is Anderton exonerated. In his choice of music during the prison sequence, Spielberg offers the clearest clue as to the identity of what the film points to: Bach’s "Jesu, Joy of Man’s Desiring ". Its lyrics are Minority Report in a nutshell: "Jesu, Joy of Man’s Desiring Soar to uncreated light Word of God, our flesh that fashioned With the fire of life impassioned Striving still to truth unknown Soaring, dying round Thy throne." Spielberg asks us to consider the value of Christian belief in the context of modern consumer society. Of course the viewer can choose to reject the film’s theology—that Christ is prefigured throughout and is itself the minority report availed to the viewer—but before that’s even a choice, careful viewing is required.

Though deeply rooted in spiritual matters, Minority Report will never be mistaken for a transcendental film, nor does it seem like Spielberg intended it to be to. (There’s no doubt he could have, given what he accomplished in A.I.) He holds back the emotion purposefully. Sure, there are some heartbreaking moments, but overall, it’s the intellectual challenge that elicits the greatest response from the viewer. Spielberg isn’t interested in today’s vague, trendy spirituality because he sees right through the new age lets-just-think-positive-and-everything-will-be-ok mentality—he knows that there’s too much suffering and emptiness in the world. Spielberg investigates an established belief system in order to discover what makes it so attractive to the millions of people who believe in it. No dilettante, Spielberg follows through with his inquiry with great nuance and detail; his sincere wonderment makes Minority Report a complete and daring work. It’s also why it could offend some people who aren’t open-minded enough to take religion or a worldview not their own, seriously. And in this lies Minority Report’s greatest achievement. It wakes you up from your everyday complacency and forces you to reevaluate your beliefs and own up to what you are. But that’s what all great religious art does.