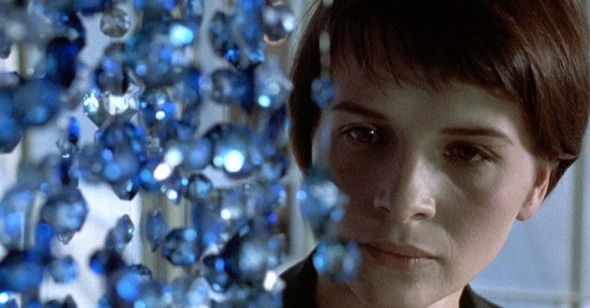 “Blue is… most suitable as the color of interior life. Whether slick light sharp high bright thin quick sour new and cool or low deep sweet thick dark soft slow smooth heavy old and warm: blue moves easily among them all, and all profoundly qualify our states of feeling.”
—William H. Gass, On Being Blue

Bathed in blue. Absorbed in blue. Cooled in blue. Blanketed in blue. Juliette Binoche spends the majority of the first film in Krzysztof Kieslowski’s Three Colors trilogy shaded, tinted, reflected, and refracted by blues. The lone survivor of a car accident that took the lives of her husband and daughter, Binoche’s Julie is awash in it, inside and out. The blue of the sky, the blue of a swimming pool, the blue of a low-lit room, the blue from a chandelier. She notices it. We notice it. The coloring is not subtle. But it is also not simple. Blue is a study in emotion externalized and internalized, negotiated chromatically, performatively and personally.

Kieslowski’s commitment to coloring is consistent, almost totalizing, but there’s always another force in the frame, something colored that isn’t mere color, something seen that’s never fully comprehended: Binoche herself. Kieslowski’s blues are emotive, suggestive, stimulative, yet never directly analogous to what Binoche’s character is feeling. To paraphrase William H. Gass, the blue qualifies her state of feeling, yet is never entirely, or entirely accurately, the full measure of her feeling. There is daylight between these projections of feeling and her actual feelings, daylight that reveals Julie’s struggle, and Binoche’s brilliance. The film is about grief, but also about the mysteries, inconsistencies, and unspoken contradictions within grief.

When we meet Julie, all we know about her is the horrific thing she’s just lived through, and the blues that haunt her like a melancholic monster. That her husband was a famous composer drifts in, that she was involved with her husband’s work does as well, but mostly the person we meet is a pit of grief. Depressed. Quiet. Inert. Hopeless. Suicidal. Binoche’s face in these early scenes is frankly terrifying, like a dam straining to hold it all back, leaking at the seams and very near to bursting. (Her eyes swell, but they never fully release in tears until the end.) Yet when she’s finally mobile and leaves her room to swallow a palm full of pills, she can’t go through with it. And when she encounters a hospital worker after smashing glass onto the floor, she apologizes. She might be operating on instinct in these moments, reverting to playing someone who cares about life, decorum, others. Or she might actually still care about these things, and is rather navigating the moral expectations of someone whose grief dictates that she shouldn’t care to live. Watching Binoche in these scenes, you see someone who really doesn’t know what she’s supposed to be doing. She’s like a child who’s totalized by feeling but doesn’t know how to understand or own up to the feelings. She wants to die; she also wants to live. The guilt she expresses to the hospital worker is about the broken glass, but it also might be about her inability to go through with killing herself. It all feels wrong. Like the blue leaking into every room, it’s all been imposed upon her.

Binoche’s eyes are brown. They pierce through Blue’s blues, insistent and resistant, alit but opaque. We’re not invited to drift or dive into Binoche’s brown eyes, not presumed to think of them as windows to a soul. Her eyes convey not a lack of feeling but an inscrutability—apt since Julia’s precise feelings are beyond comprehension. And yet blue is everywhere, implicative, editorial—less like a projection of her inner feelings than a projection of what she must be feeling. It’s not that the projection is wrong, but it is unequivocally, obviously an imposition. The paint may suit her, but she is not a willing canvas. How blue is forced upon her, as well as the overwhelming tragedy it symbolizes, is something she’s quietly, minutely fending off. It does not emerge from her so much as attack her, arresting her no matter where she goes. Binoche could have played pure grief; she could have embodied the blues. But her performance is too stubborn for that. Whether or not she wants to be, Julie is far too alive to be entombed in blue.

Kieslowski had wanted to work with Binoche on his previous film, The Double Life of Veronique, which would become his international breakout. But the actress was still involved in the runaway production of Leos Carax’s The Lovers on the Bridge, paving the way for Irène Jacob to take the role. (Jacob followed up with the director for Three Colors: Red.) While Double Life would have showcased the actress more prominently than anything she’d done before—it’s a double-hander with both lead roles played by the same actress—with Blue the actress, still not clear of her twenties, was afforded the chance to play what’s effectively a solo. Julie’s husband is dead, while her would-be lover—her husband’s compositional collaborator, Olivier, played by sad-eyed Benoît Régent—remains, while besotted with her, on the periphery. Her mother (Emmanuelle Riva) is sequestered in a home, almost, if not entirely, lost to dementia, exhibiting a lack of sympathy that seems to both traumatize and exhilarate Julie, as if it dovetails with what she’s already feeling. The closest she comes to a worthy foil is her husband’s young, pregnant lover, Lucille (Charlotte Véry), who Julie attempts to help, reconcile with, and ultimately control—classic, emotionally cubistic Kieslowski. But everyone remains secondary to the primary struggle that happens within Julie, which is not ultimately about a man at all. Her generosity towards Lucille points to this, as her shock and jealousy regarding her husband’s philandering gets quickly lapped by acceptance, perhaps even gratitude that something might loosen the grip of grief, or give her permission to let some of it go. For from the beginning, from those first images of Binoche in the hospital recovery room, there are flickers of something beyond just numbness. Something perhaps related to her unrecognized role in her husband’s music, perhaps related to suspicions regarding his secret life, perhaps even a subterranean frustration with being a young mother.

Julie’s maternal grief proves much harder to navigate, which is most evident in a struggle to deal with an infestation of mice in her new apartment. Attempting to escape the myriad associations contained in the family home, she’s nevertheless faced with unwelcome lodgers in her new nondescript, barely furnished apartment. Unable to deal with it on her own, she asks the downstairs prostitute—the one person she allows herself to depend upon, and open herself to emotionally, not incidentally a woman with blue eyes—to eradicate the mice, babies and all. Kieslowski’s allergic to clean psychological progressions—Julie’s not directly purging or conquering demons or enacting guilt, simply adopting, killing, or channeling—and Binoche in turn freights a maelstrom of action and passivity, numbness and perceptiveness, heaviness and industriousness. Her Julie is depressed, colossally so, but she’s also functional. And her functionality is what seems to fascinate both filmmaker and actress. Hers is a grief in motion, perhaps unpredictable but also progressive. We tend to negatively qualify those who would “run from” emotional truths, but the running—and swimming, per Julie’s frequent trips to the pool—can also be redolent of survival. The grief isn’t going anywhere, it keeps catching up to her, but neither is it burying her. The blue intervenes, and it blankets, yet what it shades isn’t a canvas but rather an animate face.

Along with the blues, Julie is also besieged by music, that of her husband and also of her own, which interjects into the soundscape as a more direct corollary to what she’s thinking, and struggling with and against. She tries to silence it, discarding his sheet music and attempting to abandon his unfinished work. But it keeps coming back, invading scenes and by implication her head, often accompanied by the blues, complementary but not identical forces. And again, Binoche plays it as someone overwhelmed by these forces and yet somewhat independent of them. Improbably, and frankly miraculously, hers is a cinematic creation that’s never defined by any of these imposed elements. Blasts of music, memories, pangs of regret, of loss, depression, they arise in every space she enters, and infiltrate her inner thoughts. But there’s also a free being in there, and on screen. You can see it in Binoche’s enduringly brown eyes, in the ambiguous expressivity of her face, in the way she confounds or disrupts the rhythm of every person who enters into a space with her. And that includes us. Julie is a difficult person to know, read, love. We spend an entire film with her, she’s in nearly every frame, and we’re even afforded space in her own head, and yet we’re never granted full flush contact with her. That she doesn’t really break down until the very end is, yes, a hard-fought release, but its delay had also been a suspension of what we need from such a character. In both fiction and documentary, crying jags are a shortcut to empathy—it’s an essential part of the vocabulary of emotional storytelling. Denied what we’ve come to expect from such scenes, we’re forced to pay closer attention to Julie, to reckon with a range of emotion that’s often simplified by tears.

Few films stack the deck this formidably only to let a star consistently, if often subtly, resist. Every element in the film is positioned to define Binoche: the events of the narrative, her relationships to other characters, the colors, the lighting, the music, our behavioral and cinematic assumptions, the beatific spectacle of a suffering young woman. But she remains distinct from it all, always. Things don’t happen to Binoche’s Julie that she doesn’t recognize. We know nothing that she doesn’t—we’re rather always playing catch-up to what she’ll always know before and better than us, which is herself. A self that is also transforming, minute by minute, before our eyes. Binoche in Blue absorbs all of our attention, repaying us with a portrait that’s more present for being hard to locate. Reformed by death, she’s defiantly alive. The blues don’t define her—she mixes it all into her own composite coloring.