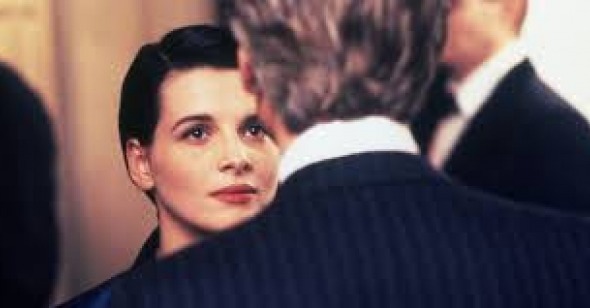 Danger Ahead
Justin Stewart on on Juliette Binoche in Damage

Even more than The Unbearable Lightness of Being (1988), it was the comparably conventional and straightforwardly steamy Damage (1992) that put Juliette Binoche on the radar of American art-house or art-house-adjacent audiences. Her performance as semi-unwitting life-ruiner Anna Barton affixed her place in the mind of boomer audiences as the beautiful, dark, mysterious European other, silently boiling with sexual desire beneath her wide-set faraway eyes and solemn porcelain visage. It was this very otherness that inspired Louis Malle to cast Binoche as Anna, whose entry into the lives of a proper English family precipitates its detonation. In the bestselling Josephine Hart source novel, Anna is likewise English, but as Malle says in the Malle on Malle interview book (edited by Philip French), “I always wanted her to be not English so that she can be a strong contrast to the other characters, who are rooted in their English background.” Thus, he made the film’s Anna half-French, the offspring of a British diplomat father and a daffy, oft-divorced Palm Springs-dwelling French mother.

It was important to Malle, a French-born but internationally employed director who made films in France, England, India, and the United States, to cast a French actress, and particularly Binoche. Though Anna fits the popular definition of one, Malle specifically “didn’t want to make her a femme fatale, a destroyer, but she had to be different,” and he and the film refuse to place blame on her or even on Dr. Stephen Fleming (Jeremy Irons), the well-off British physician-cum-politician who falls ruinously in love with Anna, his son’s new girlfriend, and proceeds to betray and dismantle his family in pursuit of his unbidden obsession. Many viewers might feel more comfortable tsk-tsking the desperate Stephen, especially as his actions grow increasingly catastrophic, pathetic, and embarrassing, but it is to Damage’s credit that it remains elegantly objective through the sordid screw-turnings of the plot, reserving what scorn it has for the old hobgoblin that is the repressive upper-crust societal customs that allow explosions like this to result from long-stifled emotions. (Malle said his film was “not a satire on the ruling class [but an] observation on their mores.”)

With his cowriter, playwright David Hare, Malle, who abandoned an adaptation of Henry James’s What Maisie Knew to helm Damage, made the necessary excisions, developments, and additions to the novel, which is written in the first person from Stephen’s perspective, but retained its “sense of fate, of something inexorable.” Irons was the director’s first choice, and the actor presages that inexorable tragedy in an early scene. After Stephen, the Secretary of State for the Environment, returns from work to his posh but cozy London home and wife Ingrid (Miranda Richardson), first seen cheerily whisking eggs, flouring meat and joshing with her husband in their roomy kitchen, he retreats with a glass of whisky to an adjacent living room and there’s a devastating, purely cinematic moment as he looks around the well-appointed room, his smile fading into despair as he seems to assess all he has and determine that none of it has brought him fulfillment. That Irons can communicate so much with a silent few seconds of screen time is a testament to his artistry and gravity, and foreshadows the fact that the true action of Damage will play out on the faces of its skilled actors.

When Stephen meets Anna at a diplomatic reception, it’s lust at first sight for both, and the film would fall apart right here if Irons was not matched by an actor with the depth and visual profundity of Binoche, who is equally capable of foreshadowing the inevitability of their amour fou with her fixed gaze. Anna’s love-stricken reaction differs from Stephen’s in that it lacks shock and fear, because, as we soon learn, she’s already been to hell, having lost her brother to suicide when she was 15 and he 16. (When later asked by an immediately suspicious and aggressively inquisitive Ingrid why he did it, she states flatly, “for love.”) To her credit, Anna warns Stephen, with the title-dropping portentousness of a first-act thesis statement: “Damaged people are dangerous—they know they can survive.” Unfortunately for all, Anna is already dating Martyn (Rupert Graves, a vision of preppy UK privilege), Stephen’s journalist son who covers the same political beat on which Stephen is a prominent player.

Poor Stephen, helplessly infatuated but still painfully aware of his many juggled betrayals, repeatedly attempts to extricate himself, botching confessions to both earnest Ingrid and career-centered Martyn. Anna is persuasive in her conviction that even her eventual engagement to Martyn is best for their affair, as it keeps her close by. This graduation to in-law incest is not taboo to Anna, who reveals to Stephen that it was she for whom her lovelorn brother committed suicide. Malle, whose films The Lovers (1958), Murmur of the Heart (1971), and Black Moon (1975) also broached incestuous themes, has spoken of Anna’s desire to have it all as an almost noble pursuit of utopia. Even Stephen’s submission to the glorious tyranny of love, which H.L. Mencken called “the triumph of imagination over intelligence,” might be honorable in a cracked, romantic way if it weren’t for all of the collateral damage—destruction brought violently to the fore in the film’s ghastly denouement. Stephen and Anna’s horny graspings for their own private Eden are selfish, but Damage’s grim view is that the bourgeois norm of repressed sexlessness is the one scarcely acceptable alternative.

While it is Stephen’s miserable head that the viewer largely inhabits, Anna is the source of the film’s mysteries, and it’s essential that an actor with Binoche’s talent is at hand to rescue the role from its potential as generic raven-haired temptress. Damage lacks the riskiness of the two Binoche-featuring Leos Carax films that predate it (Mauvais sang, The Lovers on the Bridge), but in her vulnerably confessional scenes, which trigger Stephen’s protective instincts and the athletic abandon with which she throws herself into the simulated sex, she turns Anna into more than the decorative waif she could have been. Damage has parallels with Paul Schrader’s Cat People (1982), another erotic thriller that tiptoed around sibling incest and featured a touristing international actress (Nastassja Kinski) as an exotic “othered” woman who sports the same boyish short-cropped black hair and sparks the jealous distrust of female rivals. Both Kinski’s Irena and Binoche’s Anna must partially function as blank-slate fantasy fulfillers for male protagonists.

A comparison more salient to this symposium is Claire Denis’s Let the Sunshine In (2017). By the time she made that film, Binoche had long since outgrown her image as the waif or hesitant sexual pixie in her subsequent self-assured and varicolored work with auteurs like Michael Haneke, Hou Hsiao-hsien and Olivier Assayas. Increasingly, her beauty became concomitant rather than defining, which is not to denigrate her earlier ornamental (non-Carax) performances, in which her ethereality still never failed to leave its own sort of inerasable mark. Let the Sunshine In is Damage’s near opposite, based on a male-written source and directed by a female. That film blithely takes for granted the reality of a gratifying (if not always happy), guilt-free sex life inside or outside the confines of marriage into one’s fifties and beyond, a possibility which ought not be smugly waved off as typically French. There is none of that film’s hopeful acceptance of life’s hurdles and pleasures in Damage’s somber death march and Biblical pleasure punishing. And yet… art is not an optimism contest, and by its admission of even the possibility of otherworldly, ego-defying, society-shattering lust and love, personified here by Binoche at her most ghostly beautiful, Damage confesses its basic romanticism.