A Couch in New York 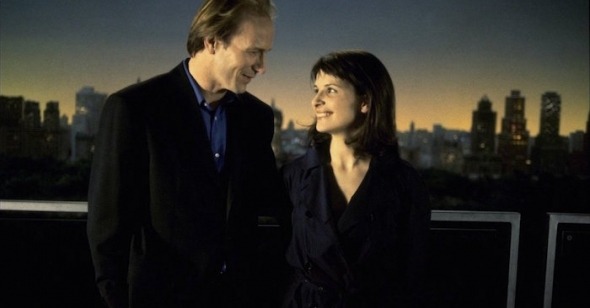 With her upset win over Lauren Bacall at the 69th Academy Awards for Best Supporting Actress for The English Patient, Juliette Binoche’s stardom hit its peak in Hollywood. She was the first French actor to take home a statuette at the Oscars since Simone Signoret for 1959’s Room at the Top. Binoche had steadily been gaining international attention after 1988’s The Unbearable Lightness of Being and many subsequent projects in English. But until The English Patient, the results were mixed, with Louis Malle’s Damage (1992), Peter Kosminsky’s adaptation of Wuthering Heights (1992), and Mara, a forgettable Henry Miller adaptation in the HBO TV anthology collection Women and Men 2. Arguably, it was Kieslowski’s Three Colors: Blue (1993) that best capitalized on what audiences had appreciated in Unbearable Lightness. Once considered for the lead role in Sydney Pollack’s 1995 remake of Billy Wilder’s Sabrina, Binoche, with her Audrey Hepburn-like soft features and innocent, easy-going demeanor, certainly would have seemed fit for romantic comedies.

However, over the course of her rich filmography, that side of her has not been as utilized as one would expect. Claire Denis’s film from last year, Let the Sunshine In, starring Binoche, was partly notable for its off-kilter romantic-comic tone, and it was not the first time Binoche had appeared in a female-auteur-driven film in this register. Immediately after her Oscar win, another English-language film in which she starred finally made its way to America, even if its Belgium release had predated The English Patient. The film was A Couch in New York, directed by Chantal Akerman, an international, cross-cultural, screwball comedy that co-starred William Hurt, and which has been widely forgotten.

Binoche had tried to work with Akerman previously, and was set to be in Nuit et jour (1991), but she had to back out of it and other projects due to Leos Carax’s troubled production of Lovers on the Bridge (1991). Although their initially planned collaboration was not meant to be, Binoche had put in the effort to see as many of Akerman’s features and shorts as she could. What caught Binoche’s attention while watching Akerman’s filmography was the dry wit and humor, which contradicts the common, simplistic read of Akerman’s films as cold and clinical. She subsequently asked Akerman to write a comedy for her. “I knew she [Binoche] wanted to have a career in the U.S. and I was a bit mischievous,” Akerman recalls in her biographical documentary, Marianne Lambert’s I Don’t Belong Anywhere (2015). Truly, A Couch in New York is one of the unlikelier actor-commissioned star vehicles.

After Nuit et jour, Akerman had been making fewer narrative features and focused on her experimental nonfiction with the fragmentary 16mm documentary film D’est and numerous shorts. She contributed the tender, one-hour coming-of-age film Portrait of a Young Girl at the End of the 1960s in Brussels to the anthology series Tous les garçons et les filles de leur âge..., which also featured works from, among others, Claire Denis, Olivier Assayas, and André Téchiné. A Couch in New York would mark her first fiction feature in five years. Despite the fact that she dipped her toes into lighter fare with the mall-set musical Golden Eighties (1986), which was deceptively light and full of experimentation, one wouldn’t assume Akerman as an artist concocting a romantic comedy scenario. Akerman noted that the idea for the film came from her co-writer Jean-Louis Benoît’s interest in telling a story of a young woman who takes over a shrink’s house, borrowing elements from an earlier film of hers, The Man with a Suitcase (1983). Suitcase is darkly comic and absurd, but like many Akerman films it is rooted in the autobiographical, following an unnamed protagonist (played by Akerman herself) who cannot kick out the absent-minded gentleman she temporarily lent her space to, preferring to avoid conflict at all costs. The disconnect in that film is the comedy, the feeling of being trapped in your own spaces, and also the negotiations and compromise involved in losing or sharing those spaces. With A Couch in New York, Akerman makes the conflict and misunderstandings involving such negotiations the comedy. It’s about a fussy, anal-retentive man and a carefree, disorganized woman who find themselves at odds when they swap their apartments, but who ultimately reach an understanding and fall in love.

Akerman was aware and deliberate that she was making a traditional, commercial romantic comedy, describing the film as a “double fish out of water” tale of New York psychiatrist Henry (William Hurt) and French dancer Beatrice (Binoche). It was Akerman’s ode to classic Hollywood, specifically screwball comedies from the European masters who came to America as émigrés and exiles from their troubled home countries, such as Billy Wilder, Charlie Chaplin, and Ernst Lubitsch. That is no surprise given Akerman’s relationship to America: her films often featured characters displaced from their homes. That feeling of being either curious or averse to new worlds defines her filmography and is easily repurposed into comedic terms.

A Couch in New York’s plot is set in motion when Beatrice answers a New York Herald Tribune ad from Henry to do a house swap: she gets his New York apartment while he gets her no-frills bohemian pad in Paris. Beatrice is fascinated by Henry’s modern, tech-heavy apartment, while Henry cannot handle Beatrice’s humble, unpretentious space as things fall apart, revealing how automated and simple his everyday was back in New York. Her “simple life” proves to be one daunting task after another for him. On the other hand, Beatrice thrives, even taking up Henry’s psychiatry practice, including sessions with his patients (among them dependable American character actor Richard Jenkins), who are more than happy to have somebody actually listening to them for once. The look of Henry’s apartment even changes to assimilate Beatrice’s harmless disorganization, her clothes and belongings adding to the décor. Eventually, Henry returns, and rather than directly confront Beatrice for inhabiting his life, reappears as a patient under a pseudonym and further deepens a romantic bond with the woman who already took everything from him.

Beatrice treats Henry’s patients with respect, but she also wants to be taken seriously by them. Binoche is wide-eyed in these scenes, but she also exudes a determination to learn, to be accountable and reliable to people, including the very man whose space and life she inhabits now as her own. She expresses resolve and self-discipline, and wins the respect of Henry’s patients, doorman, and golden retriever. She is more of an extrovert than prototypical Akerman protagonists, even as she mostly keeps her interactions within Henry’s apartment. Beatrice’s optimism is written into the screenplay, but Binoche is more than an avatar. The first time she is seen in the film she is holding the New York Herald Tribune in front of her face as she does dancing exercises. A man persistently calls for her off-screen. She puts down the paper, revealing her exhausted face and red cheeks, clearly perturbed by the disturbance. But Beatrice, upon reading the ad for the apartment swap, slowly develops a Cheshire Cat grin. It’s a movie star entrance.

The scene that best shows a rare mutual spark between Beatrice and Henry is when he (pretending to be “John”) has his session on the fainting couch, with Beatrice serving as his analyst. In these sessions, Akerman moves the camera back and forth in single takes between their faces in framed close-up. In what becomes their final session, Binoche’s emotions express a woman at odds with herself, as she tries to keep it professional when listening to “John.” A crucial line comes when Beatrice is advised not to talk about herself to patients: “It would no longer be analysis, it will be a relationship.” Yet Beatrice cannot help but be entranced by John, despite the lack of physical connection or eye contact. Just as it seems he is getting somewhere, the lights go out in the apartment. Once this happens, “John” loses his train of thought and, unconsciously, Beatrice half-whispers, “John, I love you,” shaking her head almost in disbelief at this self-realization. John does not catch what she says. Binoche’s eyes dart around; she calls out to change the subject. The film hinges on its audience buying this abrupt, accidental declaration of love. Binoche makes the viewer believe it by playing it as a surprise to even herself.

A Couch in New York could be grouped in a small wave of cross-continental nineties romantic comedies like Green Card (1990) and French Kiss (1995). But the film, even though conceived as a commercial endeavor, fell through the cracks. Akerman described itas having failed in two ways, since nobody who liked her work would be willing to watch such a commercial project, and those who watched commercial romantic comedies would not see one as made by her. The film did not become the intended fruitful collaboration of director and actress, as Akerman would describe her relationship with Binoche as cold. Upon release, the film earned unfavorable to mixed reviews and remains a widely ignored object even among Akerman fans. Binoche would continue to work on English-language projects throughout the nineties and into the twenty-first century. But A Couch in New York is most remarkable for how it displays so many of Akerman’s thematic interests in a seemingly commercial package, and for how Binoche so believably portrays both intellectual curiosity and anxiety as she inhabits Akerman’s singular world.