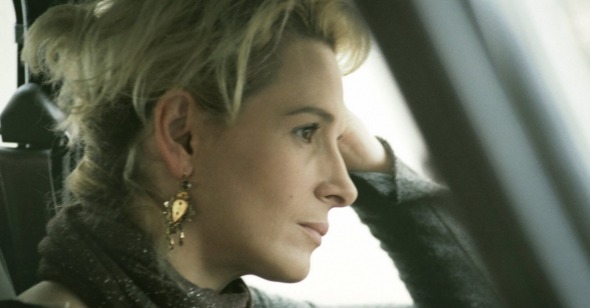 “Grown-ups are a bit complicated,” says Juliette Binoche’s character, Suzanne, toward the end of Hou Hsiao-hsien’s Flight of the Red Balloon. She’s talking to her moppy-haired son Simon (Simon Iteanu), who is ostensibly the protagonist of this film. However, Suzanne’s comment is as much for the audience as it is for Simon; it shifts the balance of the movie a little away from the child. To the extent that Hou’s Paris-set film—his only to take place outside of Asia—serves as a reimagining of Albert Lamorisse’s The Red Balloon, it works as homage: Simon is a child who experiences profound loneliness, an isolation displaced in clear symbolic ways onto the titular helium-filled sphere that dominates Hou’s mise-en-scène, just as it does Lamorisse’s. In this sense, Hou’s film is a straightforward update, one that overtly acknowledges its source material while bringing it into the 21st century. Yet Hou operates in a different register, abetted by an actress uniquely able to pull us, ever so subtly, from the child—whose loneliness is in no way minimized—and toward Suzanne, who like her son finds herself floating through life longing for those human connections that might tether her to something or someone.

The red balloon, in both films, is a simple enough metaphor for a structuring absence, for the friend, parent, or loved one missing from the lives of the people onscreen. In Hou’s film it appears more sporadically than in Lamorisse’s, but it haunts his images throughout. We see it on a mural, and we get echoes of it in the red doors at the entrance to the puppet theater where Suzanne performs or the reflection of a traffic light visible as Simon plays pinball or the curtains blocking the sun in Suzanne’s apartment or the vibrant dress she wears in several scenes. Hou’s camerawork, executed in partnership with the great cinematographer Mark Lee Ping-bing, has a wandering, weightless quality to it, typical of some of his recent films like Millennium Mambo and The Assassin but which is particularly apt here. The effect is to render Simon’s loneliness, represented by the balloon, as a persistent, dull ache, the result of his father’s indefinite absence in Montreal, his sister’s extended stay in Brussels to care for her grandparents, and perhaps most especially of the preoccupations of his frantic and manic mother who delegates her son and his care to their Chinese nanny, aspiring filmmaker Song (Fang Song).

If Suzanne, in her flightiness (so to speak), is the movie’s central absence, it helps that she’s played by a movie star. Not much happens in Flight of the Red Balloon, and in fact, many of the scenes that form the core of the movie—specifically those between Simon and Song—have a quotidian quietness. This allows Hou to play with Binoche’s star quality in the way he structures the narrative, to make Binoche the catalyst for any and every dramatic incident. It’s as if he is aware that the viewer is waiting for Binoche to appear onscreen (just as Simon waits for his mother to pay attention to him), then deploys her in intermittent bursts. But when she does appear, she brings both the narrative and emotional energy that come to define the film, as if the movie can only happen around her. Rather deftly, Hou even gives Binoche a genuine star entrance: Suzanne performs voices for a local puppet theater, and he introduces her mid-performance, first only as a voice, uttering in a deep, heaving voice “Alas! Alas! Alas!” before eventually panning his way over to Suzanne, with a mess of blonde hair that recalls her son’s. She manifests—as emotional fulcrum, as magnetic celebrity, as an actor.

Hou’s genius, then, is to provide Lamorisse’s 20th-century cinematic icon with a counterpoint in a 21st-century cinematic icon. Binoche is the extension of and the rejoinder to the red balloon. She is the missing affection, and yet she too is herself a lonely, wounded soul. Binoche’s genius, meanwhile, is that she has the ability to deploy her stardom in service of Hou’s movie without letting her character be consumed by it. Flight of the Red Balloon is as much hers as Hou’s in that it delivers on clever metatextual metaphor-making while achieving deep emotional impact, almost entirely through Binoche’s performance. The movie calls on her to disrupt its stillness and austerity, to whirl in with frantic phrases and abrupt movements. She is that frazzle of golden hair, the rush of light bursting in that also brings chaos to order. The balloon floats, but she crashes in. The tension she introduces stands in for the many tensions at the heart of this film—between East and West, auteur and star, original film and remake, child and parent. She embodies it all through her restless dirvishness.

Two sequences in particular demonstrate this dynamic. In the first, Suzanne attempts to interact with Song while the girlfriend of her downstairs tenant, Marc, uses her kitchen. She passive-aggressively ignores the woman, applying makeup to her face with her back to Marc’s girlfriend before insisting on a conversation with Marc, railing at her, “We have a real problem.” This scene unfolds in a master shot, with Binoche positioned like a theater actor center stage. The framing is typical for Hou, but here his long, unbroken take has a different valence because of the actor featured so prominently, performing directly to the camera. Binoche has played performers in several other films, including Clouds of Sils Maria, Non-Fiction, and, arguably, Certified Copy. In all, there’s a slippage between performer and character in the text of the film itself, a play with authenticity. This is also true in Flight of the Red Balloon, even if the slippage is less overt. In the scene with Marc’s girlfriend, Suzanne is clearly acting for her tenant, taking on the role of the disgruntled landlady. This raises the question, though, of what Suzanne really wants and why. The complex interrelationships among actor, character, and character playing a role for her tenant stand in stark contrast to the more matter-of-fact and reserved turns by the movie’s other central actors, Iteanu and Fang, both of whom have the same names as their characters. The distinction is overt without being overdetermined—between legibility and opacity, authenticity and performance, presence and elusiveness.

The other sequence that draws this out most powerfully is an extended phone call between Suzanne and her unseen, absent partner, shot in a single take with Suzanne driving, speaking on the phone with Simon in the back seat. We hear only Suzanne’s side of the conversation, and so Hou cleverly turns this climactic argument into a monologue, delivered by his lead with ferocious anger and desperation. She complains that she has no man beside her, no one to help her shoulder her burden. Simon protests from the back seat that he is beside her, but Suzanne doesn’t acknowledge him. The comic moment cuts the tension while also underlining Suzanne’s point, that she is indeed alone in raising her son and caring for their home. It also functions as metacommentary on the movie itself: Iteanu is wonderful throughout, charming and without affect, but it is Binoche—and Binoche alone—who must carry this film.

At a crucial moment, Suzanne leads a seminar with a Chinese puppet master. They share a train ride together with Song, who serves as translator. Suzanne offers him a postcard that she had as a child, an image that defined for her something “authentically Chinese,” whatever that phrase means. Any attempt to grapple with this particular movie must acknowledge Hou’s self-reference to his masterpiece The Puppetmaster (1993). To the extent that Hou’s earlier film is a direct meditation on culture and colonialism, this one echoes it while inverting it. In Flight of the Red Balloon, Hou exoticizes Paris, shooting it with the eyes of a tourist, and he even gives himself a direct surrogate in Song, who serves as an “interpreter” in multiple senses (literally, for Suzanne and the puppeteer, and figuratively, in providing the explicit reference to the Lamorisse). In the scene between Suzanne and the puppeteer, one might question her cultural sensitivity, but the movie seems to be making a more sophisticated point. This moment of cross-cultural exchange stands in for the movie itself. No one can see another culture through eyes that aren’t foreign, but there is meaning and beauty in the attempt to connect through art. It is one of very few moments in the film when Suzanne comes across as being at peace, satisfied that she’s made a meaningful bond with another person.

Outside of this moment of calm, Suzanne seems all too willing to push other people away. She decides to begin eviction procedures against Marc to make room for a daughter who is unlikely to return to Paris. She harangues her absent partner in ways that are all too likely to solidify his impulse to stay in Montreal. And she absconds from the life of her little one, who so desperately needs his family. To Hou’s credit—and Binoche’s—the movie never judges Suzanne for these impulses. It leaves the door open to the possibility that she is guilty of the worst kind of self-sabotage, but like the character she plays in Claire Denis’s Let the Sunshine In, Suzanne may well be more of a victim of circumstance. Both Denis’s film and Flight of the Red Balloon allow for the complex possibility that life, in all of its messiness, accommodates the option that someone might be achingly lonely for reasons outside of their control and that they might also be responsible for driving people out of their lives.

In Flight of the Red Balloon’s most extraordinary sequence—also shot in a single take—Suzanne has a piano moved from Marc’s floor to hers and brings a blind tuner in to fix it. Suzanne takes a call from her daughter, who reveals offscreen that she will not be returning to Paris. A wounded Suzanne hangs up the phone, and then she quizzes her young son about his day at school, showing him deep, uncomplicated motherly affection. The last time we see Suzanne in the film, just a few minutes after her devastating news, she is smiling as she watches the piano tuner, and the image is quite simply beautiful. This may be a portrait of resilience. But it really just feels like a portrait of a complicated woman. The movie ends with Simon on a class field trip to the Musée d’Orsay, where he and his classmates look at a painting they describe as “a little bit happy, a little bit sad.” The same could be said about Suzanne, a character rendered with delicate specificity and grace by the singular movie star and artist at the center of Hou’s work of art.