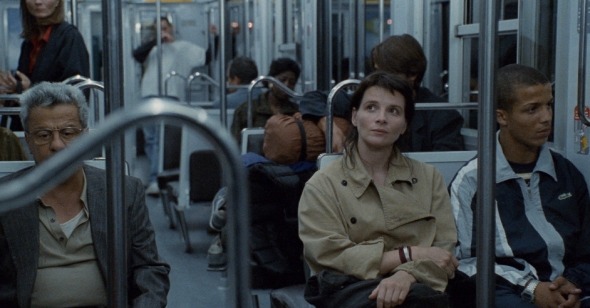 There’s a certain scene in Code Unknown that, long after everything else about the film fell away for me, my mind would return to regularly. Watching it again, after many years, was an anxious experience: I had forgotten the scene in question came so late in the film and so spent the duration breathing shallowly in anticipation.

I’m talking about the métro scene, in which Anne (Juliette Binoche), the white actress we’ve followed throughout the narrative, is accosted by a younger Arab man as she rides the train. As his friend looks on, laughing, he mockingly hits on her, getting increasingly aggressive as she ignores him. In a single take, the camera is as impassive as the other passengers, who look away silently as Anne is harassed, until finally an older man (listed as Le vieil Arabe [“The old Arab”] in the credits, although, tellingly and appallingly, the New York Times review in 2001 referred to him as “European”) intervenes, chastising him in Arabic. When the two young men finally leave the train—the one spitting on her before they do, and terrifying the car by shouting suddenly into it—Anne quietly cries.

It’s a piquant version of an old theatrical and cinematic trope: the encounter between a white woman and black or brown man in a subway car, which Amiri Baraka wrote an American version of in his play Dutchman from 1964; in his, the white woman approaches the black man, taunts him, seduces him, and kills him. In Code Unknown, a film about the impossibility of ethical relations in a profoundly unequal society, the scene caps off the film’s uneasy examination of spectatorship and responsibility, which, upon recent viewing, feels in some ways harrowingly relevant and in others quaint and limited, even pernicious. After all, by evoking the sexual threat of the racialized men, the scene could be construed as a justification for the racism that rests on a fantasmatic version of it. The scene clearly centers on Anne, and not “the young Arab,” as he’s called in the credits; it’s also easy but no less necessary to ask why Anne gets to cry, and what it means for the film as a whole—which elsewhere invites sympathy with a Romanian migrant, a French-African musician and his mother, and an impoverished French farmer—that we’re left in this late moment with concern over her victimization.

But Binoche’s performance both exposes and recalibrates these questions. In fact, her work as an actor in general captures what this scene invites us to consider as a specifically white-woman thing, while revealing the ethical and moral inadequacies of that position. Because being “a white woman” in Europe and the United States means always being, implicitly, in relation to “a black man”—positions that are structural and pre-given and that we can’t choose to vacate, though the actual bodies occupying them shift somewhat depending on the country; that pervasive tension, with its genocidal history, cannot not be felt. And because white women are so often the way racist violence is justified, and we have no innocence whatsoever in that structure of domination we continue to make possible. It detracts nothing from that guilt to note that although white women are powerful beneficiaries of this racist system we help maintain, we are also hated and execrated within it in ways white men are not.

An important element of Binoche’s aesthetic as an actor, visible throughout her work, is a kind of self-aware narcissism: emotional largesse coupled with gestural and affective recursiveness that subtly points to itself. This slight recoil inside the affective approach is close to something that very beautiful women develop to let people know that they know the effect their beauty has: on some actors, it comes across as embarrassment, which can itself be embarrassing; with Binoche, it feels like self-knowledge. Her integration of these contrasting elements—full emotion and relational recoil—is one reason, I think, that Binoche has so often played actors. Managing theatrical self-awareness without detracting from wholly absorbing emotion is a very actorly skill, and what’s particular to Binoche is the way she shows her work.

Even as archetypical “Anne” (the name of all Haneke’s white female protagonists) in Code Unknown, one of her least adorned performances, the tension of those supposed contradictions—generosity and narcissism, tidal emotion and awareness that she’s being watched—is both what animates her scenes and what gives them a critical edge. As her character is an actor, and therefore the object of the patriarchal gaze and its violence, she is also, as a white woman, the subject who gets to choose where and what to see. Throughout the film, Binoche makes us feel the price of this contradiction. When Anne and her partner Georges go to visit his depressed father, Anne listens to the two men talk without speaking, but when the conversation turns to her career, she puts herself forward a touch too enthusiastically. Binoche infuses Anne’s kindness to the older man with a relaxed entitlement; the moment in which she realizes that she’s crossed the line from warming him with her liveliness to filling the air with her own self-regard encapsulates the combination of responsiveness and self-consciousness that characterizes her acting. The scene also begins to demonstrate the relationship between this aesthetic and what a feminist viewer might decide to read as commentary on it within the content of the film: just before her slight transgression, Georges’s father tells him that Anne is prettier every day; in Binoche’s playing of the scene, it’s that compliment that encourages her to offer the title of her forthcoming film (taking pleasure in a compliment on the way you look is the right kind of narcissism; talking too much about your career is not).

Then we arrive in the métro. The young man’s approach is couched in the same kind of appreciation of her beauty that, as in the previous scene, is so clearly a trap. “Don’t talk to the riffraff?,” the young man says, “I hope I didn’t offend you. I just wondered if you’re one of those beautiful rich people. High society. No? Then maybe you’re an uptight little typist waiting for Prince Charming to race up in his Ferrari.” Running through icons of white femininity, his mockery gets it exactly right. Of course she won’t talk to the riffraff. We only see the back of her head for the first half of the scene, until she gets up to move to a different seat on the other side of the car, facing the camera. From there, what we get is a performance of uncharacteristic blankness. She stares into space, limbs slack, removing herself as much as possible from her body. “Going to snub me again in front of everyone? I’m just a little Arab looking for a little affection like everyone.” Her refusal to engage with him—an entirely recognizable strategy for dealing with street harassment, of course—speaks the wish that she could absent herself from a locked-in relation; in short, that she could occupy the position of a white man, who (as Haneke’s film both argues and, symptomatically, proves) gets to remove himself from relation with observed others. In the context of that critique, Anne’s understandable unwillingness to engage appears as the privilege of those who don’t have to, reaffirming her accoster’s contemptuous assessment.

The sense of entitlement to that removal, i.e., whiteness, and the failure of it—because she’s a woman—is what gives her tears at the scene’s conclusion a more fraught subtext than a simpler reading of a white woman’s bid for sympathy. Her body is worth what it’s worth—which is to say, so much more than her aggressor’s—because she is the idealized object of white male subjectivity. What Binoche makes us feel, in this scene and throughout the film, is that knowledge in the tension between her overt emotional appeals and terse refusals. She shows us how untenable that high-wire act of narcissism and absorption actually is: how much it depends on a form of theatrical subjectivity that keeps people like her at the center of the frame.