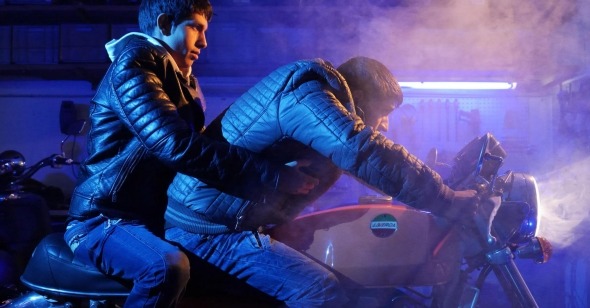 Whether deemed an aesthetic, a brand, or an auteurist “stamp,” burgeoning filmmakers looking to establish themselves on the international cinematic stage need a marker by which they can be recalled. A bravura technical move, a central position in a domestic film milieu, a pet “obsession” strewn across varying narratives—all provide the shorthand by which programmers can frame their work, critics can make sense of it, and publicists can market it. But what happens when a director’s signature is not legibility but liminality? When the essential questions of their work—and the form those explorations take—privilege blurred identities, smudged national origins, and heterodox style?

Such is the strength and the conundrum of Patric Chiha. This Lebanese-Hungarian director was born in Austria, he receives frequent funding from French sources, and his border-hopping filmmaking practice has produced works of quiet singularity. Perhaps too quiet: only one of his three features, his debut, Domain (2009), received even a cursory commercial release in the United States. Most recently, his hypnotic, melancholy, and unsettling Brothers of the Night (2016), perhaps his best work, has remained in post-festival limbo for roughly two years. The art-cinema marketplace is an undeniably capricious place. Still, I cannot help but wonder whether the qualities that most define Chiha’s artistry—a casual approach to queer sexuality, a presiding interest in the displaced self, a protean yet unshowy approach to film style—preclude the sort of press-release-ready bromides that accompany more commercially successful filmmakers of his generation.

The explorations of geographic, sexual, and interpersonal limbo that mark Brothers of the Night have been present throughout Chiha’s filmography, albeit in varied forms. Chiha’s characters often find themselves fleeing their urban-based adulthoods for the rural Austrian countryside, only to find an ambivalent mixture of pastoral majesty and provincial isolation. Home, a medium-length work from 2006, follows two businessmen as they travel to a small Austrian village to tour a regional textile factory. Fouad (Alain Libolt), the elder of the two, tells younger partner Jacques (Julien Lucas), that he spent youthful summers in the area. This begins a series of increasingly destabilizing encounters for Fouad, who eventually rediscovers the ugly anti-Arab sentiments beneath the region’s bucolic façade. An even more literal homecoming propels Chiha’s second feature, Boys Like Us (2014). After being dumped by his boyfriend, would-be writer Rudolf (Florian Carove) decides to retreat from his life in Paris and return to his small hometown in the Austrian countryside. Friends Nicolas (Jonathan Capdevielle) and Gabriel (Raphaël Bouvet, a Chiha regular) accompany Rudolf in an attempt to dissuade him from making the move permanent. In the process, they confront the various questions of sexual desirability and self-worth surrounding gay men edging into the mid-thirties.

Chiha treats these quandaries with notable empathy and casualness—an attitude also seen in Domain. While the sexuality of teenage protagonist Pierre (Isaïe Sultan) is revealed through his sweet-natured fling with scruffy twentysomething Fabrice (Manuel Marmier), Pierre’s most consequential and queerest relationship is with his sophisticated mathematician aunt Nadia (Béatrice Dalle). She adopts the role of bohemian-chic fairy godmother to Pierre until her descent into alcoholism implodes their bond. (Their final, would-be reconciliation takes place not in Bordeaux but in a rehab facility located, naturally, in the Austrian mountains.) Different as these films can feel in tone and texture, they connect through their collective interest in the interstices of city and country, past and present, normalcy and difference.

The director’s first foray into feature-length documentary, Brothers of the Night continues these explorations. Chiha follows a group of male hustlers in Vienna, young Roma men primarily from Bulgaria who spend their nights at pick-up bar Café Rudiger, shooting pool and chatting up older male clients they take into the café’s back booths. Language barriers, limited employment opportunities, and the need to provide for both themselves and their families back in Bulgaria led them to hustling. While the men make occasional visits to Bulgaria to see their wives and young children, much of their connection to their “real” lives occurs through phone calls, text messages, and images saved on social media. The soft glow of the smartphone is consistent and poignant throughout, illuminating the faces of the men as they scroll through pictures of the people they’ve left behind. At the same time, the all-male cadres they carouse, dance, and drink with become temporary reprieves from the financial and emotional responsibilities of life back home. If many of Chiha’s protagonists find themselves leaving the impersonal bustle of the metropolis for the seeming peace of their rural hometowns, the men of Brothers enter a Vienna defined simultaneously by economic precariousness, cultural dislocation, and social permissiveness.

These geographic and cultural displacements become intermingled with the even thornier issue of sexual performance and identity. Almost none of the young men Chiha follows identifies as gay, which shapes both their presentation and the limits of their erotic repertoire with clients. They self-consciously present as “trade”—handsome, conventionally masculine, a touch aloof. They allow their clients to perform oral sex on them, will adopt the penetrative role in other sexual situations, but only engage sexually with men if it’s tied to the exchange of money. In both interviews and in conversations amongst each other, they maintain their sense of heterosexual wholeness by treating their clients with a mixture of distaste, humor, and familiarity. One of the young hustlers, Vassili, recounts how he initially thought his clients would be men dressing in women’s clothes, only to find that the actual clientele looked more like his grandfather. Stefan, Yonko, and Asen (the three men followed most closely by Chiha) pass the time swapping stories about their exploits with various customers, comparing how much they’ve been paid for an evening, and even reacting with faux indignation when it’s revealed that the client of one of them has been sleeping with the other. Chiha captures this jocular back-and-forth between the men in an extended long take, which is emblematic of the patient but not clinical approach he takes towards his subjects. Brothers of the Night gives the men space to verbalize their own conflicted feelings about their profession, neither objectifying their status as sex workers nor reproaching them for using their bodies to pay the bills.

Chiha’s insight into his subjects, however, becomes most evocatively articulated when Brothers of the Night moves away from straightforward observation and enters the realm of stylization and performance. The film contains two sequences that are clearly staged situations. In each, the young men occupy roles that would seem to solidify their own confident heterosexuality but end up resolving into far more erotically ambiguous territory. The first opens the film. Stefan, Yonko, and Asen stand near some docks at night, donning sailor caps and striped shirts right out of a Jean Genet fantasia. The trio arrives a bar to drink and carouse, though this plan soon dissipates. Yonko and Asen go off together, leaving a soused Stefan to be propositioned by Nikolay, another hustler whose gender presentation reads more overtly effeminate than the rest of the film’s protagonists. Nikolay appears in the second fantasy sequence as a hairdresser working on Asen. As the haircut progresses, Nikolay begins to caress and dance in front of Asen, who responds with a vacillation between repulsion and curiosity. Both sequences allow the men to occupy positions of dominance and masculinity and yet ultimately leave them facing a figure whose deviation from both undercuts these roles in indefinite and perhaps pleasurable ways. Chiha further underscores these scenes’ status as psychosexual reverie through the use of saturated blue, orange, and pink light that (as Michael Koresky put it in a Film Comment write-up) bathes “its subjects in an extreme visual stylization that grants them a cinematic status that approaches the mythic.” With their emphatically coded roles of butch sailors/femme hairdressers and sumptuously artificial mise-en-scène, these sequences carve out a space for the men to explore just exactly where their professional roles end and their private desires begin.

Brothers of the Night refuses to cordon off these complexities into stylistically demarcated corners. Direct-to-camera interviews with Stefan, Yonko, and Asen feature the same type of vibrant colored lighting that marked the fantasy sequences. Seemingly unrehearsed conversations between the various subjects of the film take place in patently stage-managed locations, including an upscale bar and a floor of a building largely hollowed out save for a motorcycle inexplicably parked within it. The effect is twofold. Pairing the theatrical effects of the fantasy sequences with the subjects’ “natural” exchanges and self-reflections underscores the inevitably performed nature of the self in documentary film. This truism of contemporary nonfiction cinema gains further resonance when layered onto the young hustlers, whose livelihood depends upon a carefully managed presentation of their own bodies and desires to their prospective clientele.

And yet Chiha is also getting at something highly specific about these particular individuals. By priming viewers to associate the overtly aestheticized elements with the men’s inchoate relationship both to their own sexual identities and to one another, Brothers of the Night imbues the more unaffected moments between them with a charged and often tender indeterminacy. Much of the film’s second half pairs off the various men, placing them in close proximity. Their increasingly frank conversations about aging, marriage, sex, and future prospects become tied to an easy physical rapport that often skirts the boundaries between homosocial affection and sincere longing. Linking the fantasy sequence’s explicit exploration of queer desire with these subtler moments of fondness and friendship illuminates the affective flux that the men’s work injects into their relationships with one another. Chiha takes both parts of his film’s title seriously—how fraternal bonds develop when cultivated within the midnight’s tinted neon lights and deep, capacious shadows.

The focus implied by the title also underscores Chiha’s career-spanning concern with men of various sexual identities and social backgrounds. Such an emphasis makes both practical and thematic sense within the milieu that Brothers of the Night takes place. It’s worth noting, however, that Chiha’s fictional films have the nagging tendency of conceptualizing female characters as primarily sounding boards and helpmates to their male protagonists. Domain provides the obvious counterexample to this tendency, with Béatrice Dalle giving an exquisitely controlled and charismatic performance. Even then, her force-of-nature Nadia is primarily seen through the eyes of her nephew and understood in relation to his emotional maturation. If there’s a challenge I would like Chiha to give himself, it would be to bring his considerable filmmaking dexterity and nuance to subjects beyond the primarily gay and gay-adjacent men he’s chronicled thus far.

Of course, such a wish implies that Chiha has the resources to be working on another film. Given the limited exposure that Brothers of the Night has received despite its numerous critical plaudits, the ability of the filmmaker to produce another feature-length work in the near future remains uncertain. Chiha makes entrancing cinema out of experience marked by indeterminacy and flux—valuable skills in any era, but perhaps all the more needed in an era marked by fierce arguments over the policing of borders and the outer limits of identity. One only needs to watch the final moments of Brothers of the Night to see this in action. All of the film’s subjects gather on a communal dance floor. As the music thumps and the lights flicker, the men dance near and around one another, smiling and swaying on the knife’s edge between masculine camaraderie and something more. Chiha’s camera lingers and luxuriates. Then, just as quickly, the lights go up and the scene is called. The performers stop dancing and begin to chat and disperse as the credits roll. Was it all a performance? Does it even matter? For the men, it’s all in a night’s work. For Chiha, it’s yet another sign that he has his surest footing when exploring the slipperiest of terrains.