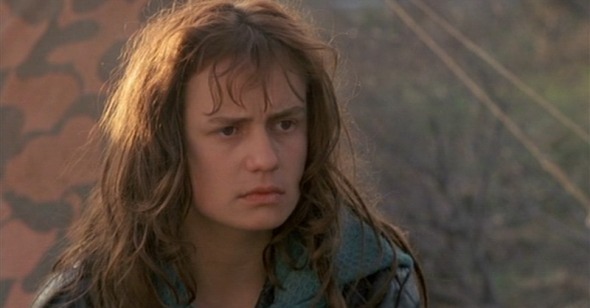 The Elements
Justin Stewart on Vagabond

The logline is hardly a recipe for box office gold: dirty, marginalized teen dies in ditch, we hear from some of her recent passing acquaintances. But in 1985 something about Vagabond clicked with the French public and the Venice jury who awarded it the Golden Lion, and today it is probably Agnès Varda’s best-known film worldwide. Its franc-stacking chic shouldn’t be overstated, but what success it did have, particularly in France (over a million admissions), is a credit to goodwill towards Varda, the catholic taste of the French public, and a canny marketing campaign featuring posters and windshield-stuffed fliers confrontationally asking, “Would you give her a lift?” It’s also probably the director’s most written-about film, with much of that focused on its status as a feminist work. That’s unquestionably one of the things it is; though hearing about a man’s death from exposure to the elements provided Varda an initial spark, it soon turned into a story of the specific snares of a female vagabond experience, and by extension the female experience. Vagabond is tailored to interpretation because it’s structured around the varying subjective, subconsciously agenda-driven perspectives of strangers on an ultimately unknowable, taciturn, and barely named enigma. Any themes you throw at it might stick, but they can’t or shouldn’t be divorced from the remarkable aesthetic merits of this righteously bleak, powerful film.

Varda’s dismay that people were still dying of exposure in the civilized modern world incited her crafting of Vagabond’s story, but it was her extensive solo tramping and photographing around Languedoc in southern France in the offseason that inspired the film’s pervading icy mood and acute sensitivity to its every setting. The creative process recalls that of her first feature, La Pointe Courte (1954), which began with her taking photographs of a small fishing village and its people before the project morphed into a strange hybrid of social realism and cerebral love story—much more influenced by nouveau roman novels than the ensuing referential movie bratdom of the New Wave. In the later film, Varda didn’t just want to show her vagabond walking, but to capture the noise that “boots make on pavement, in a field, on gravel.” In her book Agnès Varda, Kelley Conway quotes a note-to-self written just before the shoot: “What is needed is more spectacle or image or the unexpected and less story, psychology.” Instead of imposing diagnoses or motivations on the protagonist, indicting society, or doing other things bad movies do, Varda here resists the temptation to morally opine on her character as do the other voices that become the film’s tapestry. Her opening credit is “a film directed and cinécrit by…”, using her own term for “film-writing,” an early tip that she intends to interrogate her medium as much as any one societal ill, and her preproduction fixation on setting and “feel” is indicative of this untraditional approach.

The film, photographed by Patrick Blossier, has an attentiveness to landscape that’s evident from the stark opening shot of a visibly frigid hayfield overlooked by a few spindly, unsympathetic trees. The painterly image, like a canvas out of the Barbizon school, is dotted by a lonely figure, soon zoomed-in on and revealed as a farmworker gathering strewn sticks who will eventually discover the discarded corpse of Mona (Sandrine Bonnaire), contorted in rigor mortis like a Grünewald Christ. The opening also includes the first instance of Joanna Bruzdowicz’s mournful strings score, which will be returned to as a refrain in many stylistically similar camera movements. These singular repeated flourishes all, at some point, dolly past Bonnaire and begin or end resting on some inanimate object, often graphically matched in the next instance of the maneuver. These assertive intrusions are even bolder than the bits of direct address or filmmaker narration. They establish the crucialness of the environment to the life of a wanderer, the constant movement, and, in the case of Mona’s rape in the woods, the natural instinct to look (pan) away from directly confronted horror. These decisions are evidence that Varda is up to something knottier than a sad story well told.

As for the story, Varda’s pickup of a young female drifter inspired her to focus on that particular lifestyle, booby-trapped with custom dangers in addition to the already heavy burden of being at the mercy of nature and humanity. (Varda’s hitchhiker, Setina Arhab, cameos in two scenes, including one touching and partially improvised exchange with a former orphan who is now a dapper, loquacious old gentleman.) Unshyly using Citizen Kane as a template, Mona’s story in Vagabond is in large part relayed by various witnesses speaking to an offscreen interlocutor, supposedly Varda, though she isn’t identified. A majority of the scenes are brief, anecdotal. We hear from a gas station owner (played by a real Nîmes local) who gives her a job washing cars and helps himself to a sordid rendezvous in her shabby tent, after he’s already told us, “Female drifters all alike—just loafers and men chasers.” A philosophy doctorate turned goatherd (also a non-acting local met by Varda) is Mona’s most acute critic. After fruitlessly offering her some land, a private trailer, and a chance to work, the politically minded hippie rebukes her causeless rebellion: “By proving she’s useless, she helps a system she rejects… it’s not wandering, it’s withering.” The great aristocratic actress Macha Méril (who also appeared in films by Godard, Buñuel, and Fassbinder over her long career) plays a likewise wealthy tree expert who’d fed and given lifts to Mona, whose stench still fascinates her. We first see her talking to the interviewer while topless in a tub, and the intimacy further calls into question the nature of the relationships between the speakers and the unidentified questioner we know to be some variation of the director, whose interaction with the subjects we only see from the camera’s perspective. There might be a parallel, unmade documentary here about how this person ingratiated herself with the ever-candid interviewees.

The first witness after the corpse’s discovery at the opening, though, is Varda herself, narrating Mona’s naked, birth-like emergence from the sea in flashback (“I know little about her myself…”). This introduction identifies Mona as a creation of both Varda’s and the Earth’s; later, Bonnaire will also lay claim to Mona, and with the witnesses contribute a piece to the ultimately incomplete puzzle. The idyllic peace of Mona’s ocean bath is quickly sullied as Varda moves to the perspective of some ogling punk bikers, one of whom we’ll later meet as Paulo (Joël Fosse), who declares the nude teen’s body “not bad.” But Varda remains an implicit presence, just as she did more obliquely in Cléo from 5 to 7 with the onscreen ticker and character IDs, and conspicuous techniques like jump cuts. Opening with a more definitive fatal diagnosis of its female main character than Cléo, and lacking that film’s cosmopolitan exuberance, Vagabond is a dark doppelgänger of the earlier work. Of course, Varda is almost never a stranger in her films, inserting herself directly into documentaries like The Gleaners and I, which is similarly concerned with the resilient poor and marginalized. In that film, she questions and critiques her own status as an artistic gatherer and sponge, and puts her own aging body up for candid examination. Her autocritique in the nominally “fictional” Vagabond is less direct, but by being there she includes herself as one of the witnesses who allows Mona and those like her to freeze to death.

That might make Mona sound like a pathetic victim, but Varda and Bonnaire’s achievement is that she inspires neither disgust nor pity. Not a doomed and fragile victim of humanity’s cruelty like Bresson’s adolescent Mouchette, Mona is a tough, able-bodied woman. If she wasn’t dead in the opening scene, you might think her indestructible. Rude, resistant to honest offers of help, partial to lame puns (“I’m not made for the maid,” “bread for some bread”), and without any noble motivation for her wandering, she’s not particularly sympathetic. And yet she doesn’t alienate and you’re always on her side, because in the 17-year-old Bonnaire’s hands she’s so human, and sometimes funny, as in her delightful scene getting day-drunk on brandy with the old lady (Marthe Jarnias) of the house where she’s crashing with a dreamer maid (Yolande Moreau). There are smaller feats of humor by Bonnaire too, like her enraged expression upon discovering that a cadged baguette is rock hard; she glowers and smashes it against a post. Crucially, Mona doesn’t care what you or any of the people she encounters think about her, though she does let her guard down with the fieldworker Assoun, another real Varda discovery whose character teaches Mona how to prune vines and treats her as an equal, before abandoning her due to peer pressure from the other male workers. As in Maurice Pialat’s À nos amours, released two years before, Bonnaire is intelligent and present beyond her years, fully inhabiting the frizzy-haired, filth-caked girl the actress took pains to distance herself from in interviews at the time.

Unlike the stage glue chapping her lips, some of Bonnaire’s acting isn’t simulated. In the terrifying scene preceding Mona’s demise, she is wandering through a village and is suddenly attacked by what appear to be tree monsters manhandling her and dousing her with wine dregs. Apparently they’re celebrating something called Palliasse Day, a sort of pagan ritual. For this “final defilement” of Mona, as Varda puts it in her 2003 documentary Remembrances, looking back on the film, Bonnaire didn’t know what was coming, or at least how aggressively the revelers would toss her around, and her terror is real. Varda slows down the footage at one point in the documentary to better observe (and savor?) what she captured here. Afterward, now minus the cocoon of her sleeping bag, lost in a fire, Mona will finally fall into the ditch and die, a last close-up showing her painfully alive, nakedly afraid eyes. The dismal white body bag from the first scene, and later a potter’s field hole, will now house her, and even though she can finally stop walking there’s no indication that she’s gone to a more restful place.