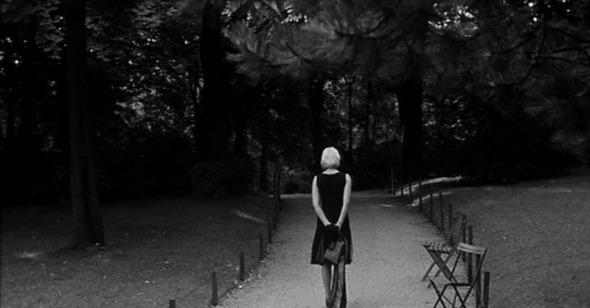 “How we spend our days is, of course, how we spend our lives. What we do with this hour, and that one, is what we are doing” the novelist Annie Dillard once wrote, a sentiment taken both to heart and logical extreme by Agnès Varda in Cléo from 5 to 7 (1962), her second film and the one that truly launched her career. Famously taking place in real time, Cléo follows a woman over the course of two hours who might be seriously ill as she comes to find a heightened sense of value in every minute, every exchanged glance, every overheard conversation or snippet of news blasting from a cab radio, however mundane. While Dillard and Varda share a fascination with the existential questions lurking behind quotidian experiences, the god within all of us as it were, their paths to these questions differ. In the quote above, the writer was in fact referring to scheduling, to the purposeful use of time that “defends from chaos and whim,” whereas the filmmaker’s heroine is unique in finding meaning in exactly those qualities Dillard seeks to defend against: the time spent without real purpose; the lives no less rich for their frivolity or idleness, vanity, or indulgence.

The titular character, whose name is short for the trying-just-a-tad-hard stage name of Cleopatra, is a pop singer situated in time and style somewhere just between the wane of the chanson singers of the earlier half of the 20th century and the wax of the yé-yé reign. Played by Corinne Marchand, she is very charming, very vain, and very blonde. She is also a woman in a moment of internal crisis, awaiting a diagnosis from her doctor regarding the tumor in her belly, which may or may not be a sign of life-threatening cancer. We become aware of this fact through the elegant, color-drenched tarot card reading that opens the film. It is one of the most recognizable and beloved sequences in Cléo from 5 to 7 for a number of reasons. First of all, the rest of the film is strictly black-and-white. Secondly, it introduces us to the central issues of the protagonist, and places her specific woes within the larger rubric of archetypal human emotion, before she even appears on screen. Finally—and this takes real balls on the part of its director—it lays out the entire storyline that is to follow in a matter of minutes, almost as if to highlight how little plot matters in this film. Although nearly every word during this ambitious credit sequence cum prologue comes to pass, the anticipation of discovering how—aesthetically, emotionally, logically—far outweighs the potential anticlimax of already knowing what.

The “what” of it all may not sound inherently compelling or cohesive on paper, a mishmash of random conversations, cityscapes, images of Cléo drifting through town and trying to make sense of her volatile emotions and uncomfortable pull toward more serious thought. However, through the protagonist’s eyes (and Varda’s playful but controlled direction), these moments, the collection of seconds, minutes, hours, before she knows if she must ready herself for death, are filled with wonder at—or at least respect for—the ordinary things. Cléo turns away from her rather self-centered musings to observe the rest of the world with a combination of fear and fascination: a man and a woman at a nearby table break up over her reluctance to let him spend the night, though she didn’t seem quite ready to call it quits; a busker on the street swallows a frog whole, back legs still fighting the tide. Unlike many films that explore a woman’s relationship to death in a passive sense—a character forever altered by being orphaned or widowed—Cléo must face the idea of her own death, and the time on hand allows her to ask what her life has been, what life even is if hers might end so suddenly. In the hours between the film’s beginning and its conclusion, the only processing time provided to her, she begins to reevaluate the business of living taking place both within and all around her.

She is stubbornly fighting her movement toward a more reflective life, part of the reason her feelings shift with such mesmerizing tempestuousness. One minute Cléo is despondent about her potential illness, crying in public, screaming that she can feel her body disintegrating this very moment; the next she can think of nothing but trying on the out-of-season hats she sees in a store window, admiring her image and getting a visible shopping high. Although many facing the prospect of death and cancer must experience strong conflicting emotions, with the character of Cléo it is often unclear how much her responses are performative, for the benefit of others or herself. Varda has said about her protagonist, “Because of her fear of death, Cléo discovers that she has been a doll, an object . . . she no longer cares about being looked at, she wants to relate to people, to become a person.” Of course, for the viewers of the film, her exhibitionism can never truly disappear. She is a deeply self-conscious woman, as we learn by her fixation on her own reflection—in mirrors, in shop windows, reflected back to her in the eyes of her lover. The motif of mirrors is used over and over, often with stunning camera choreography that gives a sense of inner turmoil and constant motion that belies her external grace, and dissolving the boundary between the solid flesh and its reflection.

Varda also allows us access into Cléo’s inner monologue, in which it becomes clear that part of her fascination with mirrors is not just vanity, but reassurance. Cléo conflates her appearance not just with her overall value, as society regularly does with women, but with the state of her health. She sees her beauty as a talisman:. “As long as I am beautiful I am more alive than the others,” she says silently to her mirror image. It is not only Cléo who believes this; on a rare visit from her lover he exclaims, “Your beauty is your health!” after which she chooses not to let him know about the fateful news that awaits her. Later when she is rehearsing music with a composer and lyricist, the mood shifts again, from pranking and teasing, the camera movement short and light, to a dark reverie as Cléo sings a song about her body decaying, literally dying of longing and love. These particular kinds of thoughts, while certainly front and center in the character, tend to disproportionately plague women thanks to gendered societal pressures that haven’t changed nearly enough in the decades since this film was made.

The idea of the female gaze—an annoyingly trendy but nonetheless useful concept here—is essential to the film, and quietly revolutionary in an industry that still considers white, straight, and male to be the default perspective. Varda has occasionally chafed against being labeled a feminist filmmaker, but her films, while dealing with universal themes, are filtered through distinctly, palpably female perspectives without necessarily needing to announce that they are doing so, particularly in Cléo from 5 to 7. We hear the inner thoughts of other characters in the film besides Cléo, but they’re always women. We are also often given the opportunity to look through another woman’s eyes, such as the taxi driver who confidently navigates the backstreets of Paris that she knows so well. Even when the camera’s gaze falls on Cléo, it is usually through the eyes of a friend, or in a mirror. Varda is willing to show some of the lighter aspects of the realities of female life for most women, such as shopping and primping, without suggesting that these are representations of all women. Cléo’s most strikingly free moment is not necessarily borne of the climactic connection she makes with the newly met soldier who will ultimately accompany her to the doctor, but just before she meets him. She is in the park, completely alone, no company or reflection anywhere, and she is singing and dancing for herself, for her own pleasure, to actually experience it regardless of the absence of an audience.

The film often reveals something about human nature not through pathos but tongue-in-cheek humor. Yet the film’s best moments combine both, at the same time or in a sudden, breathtaking shift as mercurial and moody as its heroine. It is incredibly funny when Cléo goes to a crowded bar, throws on some shades so as not to be recognized, then puts her own song on the jukebox to see how people respond. What begins as a bit of joke, however, takes on a different tone when she becomes distracted by the many differing conversations taking place, and we realize that perhaps this was not just an exercise in ego but an inquiry into her potential legacy should her life end sooner rather than later. Or the slightly morbid moment when she offers her newly purchased hat to her artist friend on a whim. Although the friend is unsettled in sensing that the generosity partly stems from an instinct to give away all personal effects, she protests only for a moment before promptly saying, “Actually yes!”

Even the ending of the film is a bit of a complex gag, as Cléo is unceremoniously told by her doctor that she does in fact have cancer, but not to worry about it, before the man blithely drives away in his sports car. Varda could have chosen to tell us nothing at all of Cléo’s diagnosis—to suggest that it is no longer important, to rely on a total lack of narrative resolution to indicate the change in the protagonist’s character. Instead, we are given the opportunity to see it, which is far more complicated. Although Cléo hears the exact thing she had been dreading acutely from 5:00 to 7:00 and with a dull sense of foreboding weeks before that, the news is no longer relevant. While things are more uncertain than ever in terms of Cléo’s physical well-being and the storyline of the film, the subtle change in the landscape of her soul rather than her organs, means that some kind of emotional closure had been reached, one that is far more satisfying and meaningful than a clean bill of health.

Cléo from 5 to 7 will screen at Museum of the Moving Image on October 16, 2016, featuring an introduction by Farihah Zaman.