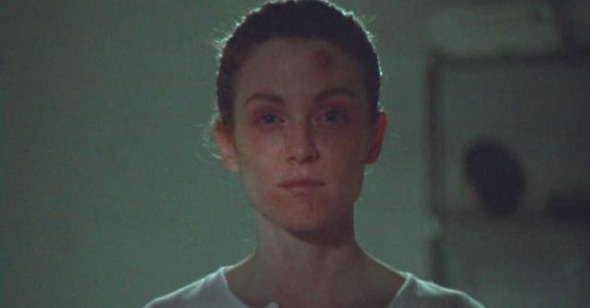 The winner of the Academy Award for best picture in 2006, Paul Haggis’s Crash, is the epitome of the “check mark” approach to the multiracial and multicultural fabric of the contemporary megalopolis. Structured under the fearful politics of correctness, the film pretends to offer a complex mapping of Los Angeles by giving a voice to the multiple ethnicities that populate it. Blacks, whites, Persians, Latinos, Chinese, Vietnamese etc. pop in and out of Crash from a checklist that the filmmakers thought necessary in order to cover all possible angles. As a consequence, the film sketches all and each of them but fails to provide any insightful intervention of the real social conflicts that structure the modes of exchange between these different groups. Driven by a providential plot, Crash instead seems to have instrumentalized the global look of its ensemble cast for the sake of promoting its critical legitimacy. Todd Haynes’s Safe (1995), conversely, while breathing almost exclusive whiteness all the way through the narrative, fully addresses the racial problematics at the core of the compartmentalized layout of Los Angeles and its neighboring towns.

Set in San Fernando Valley (a.k.a. “The Valley,” the first suburb of America), the film chronicles the inexplicable illness of an upper-middle-class “homemaker,” Carol White. The film opens with a long tracking shot originating from inside a car that shows a suburban space where all houses resemble one another. We could potentially be in any-suburb-wherever of wealthy America, where capital has built up an isolated community structured under the rubric of the nuclear family that pursues compartmentalization to remain safe, outside the reach of those feared Others that may threaten it. As Mary Ann Doane states in “Pathos and Pathology: The Cinema of Todd Haynes”: “In Safe the point of view is through the windshield of the car (and here we have haute suburbia), of streets with identical lampposts and houses, trash carefully placed at the edge of driveways, of serial production, of sheer separation from the rest of the world as signified by the gate at the end of the Whites’s driveway.” It is thus a hypercontrolled environment where the Whites thrive and feel at ease, far from the dangers lurking in every corner of the city.

The White’s household and the suburb where it’s located are indeed the negation of the multilayered complexities of neighboring Los Angeles. It is a space where a racial cleansing has been enacted via the possession of capital to exert absolute control. In other words, the white race has created a haven it can absolutely master, allowing only the presence of racial Others as subordinated providers of services for the ruling White class—i.e. the Whites’s Latino maid, the Asian clerk at the dry cleaner—or as the subject of a racially biased essay written by Rory, the Whites’s son, which describes Los Angeles as the gang capital of the world and the risk that these groups would penetrate the San Fernando Valley. Without hesitation, Mr. White approves of his son’s racist narrative while Carol is content to utter her displeasure with the graphic language the boy has used to describe racial conflict. Not accidentally, thus, the film kicks off with a car tracking shot, since the automobile itself and the promise of mobility and reduction of spatial and temporal differences it carries with it are the ultimate facilitators of the social and economic apartheid the film chronicles. In addition, as Susan Potter affirms in “Dangerous Spaces: Safe,” the “private car technology and its associated infrastructure of enclosed parking spaces and wide multilane roads and highways compose an invisible social barrier that may be more dangerous than the protection it appears to offer.” The invisible substances they contain initiate Carol’s descent into sickness.

Carol has a very standard lifestyle for a wealthy upper-middle-class woman: she routinely attends aerobic sessions, dines with other white couples, discusses bestselling self-management books such as How to Own Your Own Life with her friends, constantly drinks glasses of milk and, above all, spends a great deal of energy redecorating her house and garden. Yet, one day the inexplicable happens: her body becomes environmentally sick to the surrounding spaces of her everyday. Her bodily reaction to the thousands of invisible substances of the pervasive artificial products of the city trigger a physical collapse and a mental breakdown that ultimately carry her to a New Age retreat, Wrenwood, once all forms of conventional medicine have failed to cure her. In addition, as her body progressively gets worse, as all the technologies of regimentation she had put in motion to master it fail to provide an answer to her sickness, Carol begins to lose sense of her own life, failing to recognize where she has been all these years of superficially unproblematic marriage: ‘Where am I?’ she asks her baffled husband while lying down in bed.

However, rather than gaining access to her interior as a result of her crisis, Haynes’s film keeps us at a distance from her, unwilling to enter a psyche that may indeed have little explanation to offer since Carol herself seems to unable to understand the causes behind the collapse of her family life. Even though the opening tracking shot seems to be anchored to Carol’s point of view as she drives to her house, once she has entered her world, Haynes detaches the story from her and repeatedly deploys long establishing shots utilizing a wide-angle lens, offering full visibility of Carol’s household as she maneuvers through it. In fact two simultaneous and antagonistic movements signal Haynes’s treatment of Carol. As she sits down with a blank look on her face sipping milk, the camera zooms in and dollies out, getting slightly closer to her body (a medium close-up) and yet moving way from it at the same time. At one point all movement stops as we keep staring at Carol’s mechanical consumption of her milk doses, as though we were an anthropologist, studying the cultural codes and behaviors of an unknown human subject. Haynes’s “documentary” approach to Carol and the Whiteness she ultimately embodies accomplishes a double purpose. First, it establishes a parallel between the whiteness of her last name with the empty field of Carol’s inner self. Second, it points to the cocoon of privilege that has shaped the contours of her social and mental persona and outside of which she cannot function or even exist. Rather than chronicling her road to cure, the film offers a detailed account of her heightened seclusion into progressively smaller and “safer” spaces. In the end, she isolates herself even further, in a hermetically sealed igloo inside Wrenwood.

It is here, in the very last shot of the film, when the expressive power of the close-up comes to the fore for the first time. Carol steps into her igloo. She sits down and breathes from the oxygen container that has become her inseparable companion. Haynes records her gesture in a full shot, zooming in slightly. She then looks off-screen. Cut. Carol confronts herself in the mirror. Now we are positioned in a slight low-angle, exactly where she was sitting down. Cut. Carol is looking at herself in the mirror. The first close-up of the film welcomes us. We are as a close to Carol as we will ever be. With a faint voice she utters, “I love you.” She pauses. “I really love you.” She keeps looking at herself in the mirror, in silence. Cut to black. The end. The devastating power of the close-up becomes the very tool to witness how the face of a healthy woman has transformed into a veritable corpse, lost beyond any future possibility of a productive societal exchange. After being repeatedly denied, we seem to be granted access to Carol’s inner self. What is in there? Only the self-love doctrines of Wrenwood’s guru, Peter Dunning, since according to him the source of one’s illness is inside the self and the only possible cure is to displace that self-hatred and transform it into love. Thus, even though the last shot of the film seems to promise access to Carol’s interiority that had been previously denied, it conversely signals her utter lack of personal identity. And instead of marking her gaining of subjectivity, it points to the fact that she remains trapped within a discursive space she herself does not control. If before she was a ultra-white homemaker, now she is the sick fiasco of Dunning’s unproductive New Age empty burble. She is as far from healing as she was in the beginning of her physical seizures. For, behind its duping surface of harmony and peacefulness, the retreat contains the same contaminating agents that had attacked Carol in the city.

Like P.T. Anderson’s Magnolia (1999) and Punch-Drunk Love (2002) and David Fincher’s Fight Club, Safe could have happened anywhere in America and, yet, not. All these films point to particular referents, ideologically charged in the public imagination with a set of valorizing features, and, at the same time, they aim elsewhere, ultimately extrapolating the set of meanings they put forth to many other alike spaces where similar societal and affective patterns exist. What Haynes does is to drop small doses of strangeness to the ruling normalcy and let the triggers of the social click one after another to attempt to contain the threat posed to normalcy. In doing so, he exposes the perverted ideological structure that holds them together.

Like Fight Club, the film diagnoses the overwhelming presence of the artificial as a superlative mediator of human relations inside a cityscape whose quasi anonymity enables a leap from the local into the U.S. national. Whereas Fincher’s superficially subversive enterprise strives to offer a way out of such entrapment via guerrilla warfare and the spectacle of destruction, Haynes’s anthropological study of a middle-aged woman in physical and psychological crisis secludes human subjectivity in a caging self-isolation that seems to discard the affective exchange with the other as a escape route from the sickness the inert fabric of the city has triggered. This partial dissolution of specific spatial and temporal coordinates is not necessarily a conscious attempt to gain a wider scope in their ideological attack on the world of hyper-concentrated consumerism. Safe clearly announces in its opening sequence the historical period and location of the action about to be depicted (while Fight Club is based on a best-selling novel explicitly set in Wilmington, Delaware). For, after all, isn’t this lack of identifying markers an actual social reality in the contemporary U.S.? Isn’t Carol White, in the final, distressing close-up a helpless soul whose entire life scope has become senseless and reflects in the decaying skin of her face the physical trace of the price one often pays if our body and/or psyche refuse to fulfill the duties our social niche has ready-made for us? Isn’t Haynes final static close-up an aesthetic correlative of the seemingly invisible, on the surface non-intrusive, social forces that shelter our well-being as long as we fit the mold?