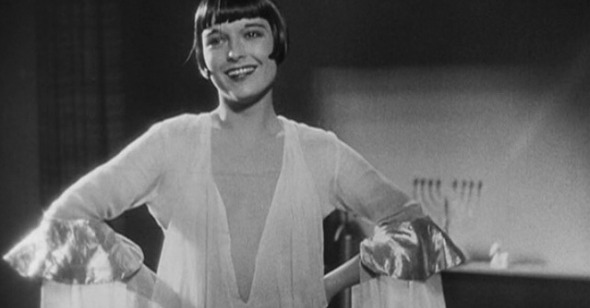 Louise Brooks’s Lulu is but one element of Pandora’s Box (1929), though, given the havoc she wreaks, she is its societal equivalent of fissionable material. Adapted from two Frank Wedekind plays by Ladislaus Vajda for the director G. W. Pabst, the legendary German film examines the “Lulu Effect,” the destabilizing of the German bourgeoisie by the wanton demimonde who symbolizes primitive sexuality. Pabst gave flesh to each of the characters who lust after her, love her, and/or exploit her: her wealthy lover Ludwig Schön and his son Alwa, Countess Geschwitz, Lulu’s tramp-like pimp (and original corrupter) Schigolch and his aristocratic equivalent Casti-Piani, the strongman Rodrigo, as well as the Meter Man and Jack the Ripper. As memorable as they are, nothing they do in the film is as indelible as the sheer presence of Lulu: her devastating smiles, her disarming bursts of physical activity, her vicious smirk on wresting Schön from his fiancée, the pieta shot in which she cradles Alwa, her rapt absorption in Jack in the seconds before he kills her, the gleam of her phallic black bob.

Such is Brooks’s command of the arena Pabst provided for her—casting her being his greatest feat—it’s fair to ask to whom does Pandora’s Box “belong”? Like Pabst’s The Joyless Street (1925), The Love of Jeanne Ney (1927), and Diary of a Lost Girl (1929), the latter film his second vehicle for Brooks, it wrestles with class differences, prescribed morality, and sexual politics. That Lulu keeps a menorah in her apartment and her adoptive father Schigolch is self-evidently a Jew implies the film is anti-Semitic. Yet who’s to say that Brooks’s irreducible erotic irradiance isn’t more important than any of its themes or stances?

The idea that Brooks is the film’s unofficial auteur isn’t new. Eric Rentschler writes in his introduction to The Films of G. W. Pabst: An Extraterritorial Cinema, “The dominion of Louise Brooks exerts an ever more compelling power [than the empowered perspective of Jeanne Ney]; her fascination as a screen presence and a fictional character threatens the very authority of the director himself. Critics have repeatedly suggested that the ultimate energy fueling Pandora’s Box . . . comes from an actress’s sterling performance and persona rather than Pabst’s directorial intelligence, in essence recasting the auteur in a secondary role as recorder; if he showed any talent here, it was above all his aplomb with a found object.”

Picking up on Thomas Elsaesser’s view that, unlike Wedekind’s original scheming Lulu, Brooks’s incarnation is “seductively sexual because she is a being of provocative externality, animated but without depth,” nor memory, will-power, discipline, self-reflexivity, or pathos, Mary Ann Doane argues (also in The Films of G. W. Pabst) that “this is a process of projection which also exceeds the limits of the film text. Subsequent critical discourse surrounding Pandora’s Box exhibits a compulsive fascination with the figure of Lulu or . . . Louise Brooks, so much so that the film often seems to be more accurately described as a star vehicle rather than as the work of an auteur.” In The New Biographical Dictionary of Film, David Thomson asks, “Is Pabst or Brooks the true creative personality [of her two Pabst films]? The tentativeness in all Pabst’s work, and the dullness of most of his later films, support Lotte Eisner’s feeling that Brooks had ‘succeeded in stimulating an otherwise unequal director’s talent to the extreme.’” Richard Leacock, who interviewed the 67-year-old Brooks on camera in 1974, marveled, when talking to her biographer Barry Paris, at “the extent to which she changed Pandora’s Box—Pabst’s whole conception of it. It became a film about her, rather than about Lulu.”

So there’s a consensus that Lulu and Louise—indivisible, if we believe Brooks when she says she was playing herself—so colonize Pandora’s Box that the vision of loveliness became the visionary, too, by dint of her animal magic and, supposedly, its beguiling of the infatuated Pabst: a case of New World Dionysianism disturbing Old World Apollonianism 27 years before Nabokov’s Lolita was published. Yet we must proceed with caution. Pabst had been German cinema’s leading exponent of the anti-Expressionist Neue Sachlichkeit (New Objectivity) movement, partially inspired by the spirit of American pragmatism, since he directed Garbo in The Joyless Street. He must have relished the irony of importing an American flapper who, in character, would visit sexual chaos on the film’s conflated Prusso-Weimar patriarchy and aristocracy, represented by the establishment nabob Schön (Fritz Kortner) and the Countess (Alice Roberts) respectively.

Brooks, who didn’t read the Wedekind plays until thirty year later, took little credit. “[When] I acted I hadn’t the slightest idea what I was doing,” she told Leacock. “I was simply playing myself, which is the hardest thing in the world to do.” She took responsibility only for Lulu’s dance steps in a scene, shot on the first day of production, with Carl Goetz as Schigolch. As a trained dancer, she improvised these steps (while naming Pabst as “essentially a choreographer in direction”). Though they socialized in the evenings, Pabst barely talked to her on the set, trusting her instincts. Whereas he would explain scenes exhaustively to “an intelligent actor,” or “with an old ham…speak the language of the theater,” she noted that “[I]n my case, he would saturate me with one clear emotion and set me loose.”

Since Brooks lived to witness her retrospective consecration as a near mystical screen enchantress deemed more important that Garbo and Dietrich by Henri Langlois—and to promote it shrewdly in her later career as a film essayist—it probably suited the retired actress, aware of her public identification with Lulu’s magnetic passivity, to dispel the idea that she made any creative suggestions to “Mr. Pabst.” Considering herself intellectually null at the time (despite her reading Schopenhauer between takes), Brooks can be regarded as Pandora’s Box “auteur“ or “visionary“ after the fact only, and then, of course, in a spiritual rather than a literal sense.

Her 1965 essay on Pabst insists he controlled every aspect of the film’s making. She recalled how he took advantage of tensions between the actors (such as Kortner’s contempt, mixed with desire, for Brooks) and kept the actors off balance by shooting scenes differently than how they expected, the better to elicit their honest reactions to momentary events as they occurred. This suited Brooks, who proudly described herself as a passive actress, though reactive acting does not preclude aggression. When Schön shows up with his fiancée, a government minister’s daughter, at the first night of Alwa’s revue, Lulu, the star, refuses to perform and retreats to her dressing room in a jealous pique. She puts on a charade for Schön instead when he is sent to fetch her. Throwing an elaborately childish tantrum, she manipulates him back into her arms, a testament to Lulu’s acting-in-life skills. When the straight-laced fiancée (Daisy d’Ora) and the Lulu-smitten Alwa (Franz Lederer) barge in to find the wispily clad slip of a showgirl preying sexually on the hulking Schön, she gives them a malign smile that problematizes the constantly repeated notion that she is an innocent in regard to sensuality. Her conscious femme fatalisme here prefigures the self-actualizing agency that feminist critics have ascribed to film noir’s deadly temptresses. She is innocent in the sense that sex is not, for her, tainted by guilt or sin, but grownup enough to wield her sexual power in ensnaring Schön as a husband, ensuring her social advancement—and to gloat triumphantly at weaker vessels with emotional claims on him.

Similarly, Lulu is not passive in Schon’s killing behind closed doors at their wedding party. In refusing to shoot herself with the revolver he forces on her, she brings about the struggle that causes his fatal wound. She isn’t ready to die just yet. Whether she is aware or not that a serial killer of women (if not the Jack the Ripper) is lurking somewhere in the London fog, there is agency, too, in Lulu’s picking up and welcoming unpaid-for sex with a disturbed-looking vagrant, for by then she has accepted her fate, unlike Wedekind’s Lulu. Brooks, who revered Pabst as her mentor and was grateful for the respect he showed her, believed he was conducting a personal study into—was, in fact, engrossed with—“sexual hate” and “its flaming reality,” although she doesn’t acknowledge it was enfolded in his critique of socially ordained morality. Leacock questioned Brooks’s use of the “sexual hate” phrase but didn’t get a proper answer from her. In adhering to Wedekind’s “rewarding” the Jewish Lulu’s engulfing of Germany’s phallocentric Christian capitalist society by having a knife thrust into her uterus, Pabst was auguring the rise of Nazism, as Josef von Sternberg did by foreshadowing the rise of the Hitler youth in the spiteful schoolboys of Josef von Sternberg’s The Blue Angel (1930).

Brooks’s reflection that, on Christmas Eve, Lulu is “about to receive the gift that has been her dream since childhood. Death by a sexual maniac,” sounds like an attempt to psychoanalyze the character (and herself, unconsciously or not) as an emotionally arrested victim of child abuse who rationalizes her relentless promiscuity as pleasure-seeking when what she’s seeking is someone to take the pain away. The mystique of the femme fatale whose final victim must be herself—which equates to Brooks’s self-willed exile as a film star too proud or careless to play the Hollywood game—made Louise/Lulu myth-ready when her American Life was granted a Second Act.

The reviewers of Pandora’s Box who wrote that Brooks couldn’t act misunderstood the childlike aspects of Lulu’s nature and didn’t scrutinize carefully enough her resigned demeanor in the London garret, which reveals that Schigolch and Alwa have become pathetically dependent on her. In any case, she rose to the challenge of playing differently nuanced characters in Diary of a Lost Girl and Auguste Genino’s Prix de Beauté (1930), a virtual Brooksian psychodrama scripted by René Clair and nurtured by Pabst. Thymiane, her seduced schoolgirl turned prostitute in Diary, grows in empathy, sympathy, and wisdom; her cathartic flash of anger toward the end showed a different side to Brooks. Yet “Lulu” is present in the film, too. When Pabst frames the swan-like emergence of the reformatory escapee as the most dazzling of the brothel’s inmates—her boyish crop replaced by her iconic bob—he was surely forging an intertextual link with Pandora’s Box, proving that Louise/Lulu is ineffaceable as pure image—and as ineradicable and unsentimental as desire. No matter who was calling the shots, it was “the look” that prevailed.