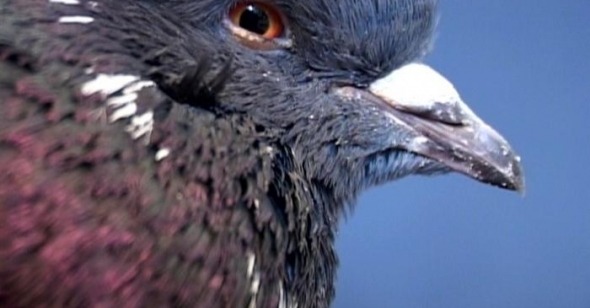 The artist Dani Leventhal began working in video after she injured her hand while making a sculpture. Though she had been collecting images on borrowed cameras for some time, it was not until the accident that she began shaping videos in the manner of her art works, assemblages of malleable forms: animal hide, resin, concrete, and, in an extended sense, her own body, the hand broken in three places. This body, imperiled and wounded, but also extraordinarily sensitive and perceptive, is central to her practice. Since 2003’s Draft 9, Leventhal has made over a dozen films that blend diaristic fragments and staged scenes from her own life, all of them arresting, intimate, and to my mind some of the most insistently vital work made in the past decade. As guide and subject, she appears often in her videos, whether reflected on the surface of a pond or seen from the perspective of a camera mounted opposite her on a bicycle, and we frequently hear her speaking from behind the lens, responding to what appears onscreen—chiefly her family, her friends and lovers—and wrestling with the complexities of Jewish identity in the United States and Israel.

Leventhal peers closely at other bodies, too. Often these are in states of aging, as when she examines the sagging folds of her grandmother’s neck in Tin Pressed (2011), or of disease, when Leventhal herself lies prone on an examination table in Draft 9, a film comprised of Leventhal’s dissection of road-killed creatures, scenes of her interactions with her family and loved ones, and her relentless travel by bike, boat, and airplane. In Draft 9 she lingers on the remains of dead animals, her camera focused tightly as she strokes the head of a crow or squeezes a fetal possum still attached to its mother’s womb. Her recent work Shayne’s Rectangle (2011) is a short comprised of room interiors, a woman holding a bird next to a pool, and mysterious landscapes, as an attempt to heal her sister’s illness. In her films all bodies, human and animal, are mutable and tender, prone to wear and wound, but even in death they brim with unexpected vitality.

In a market flooded with prosumer-grade video equipment, Leventhal has crafted an aesthetic out of the humblest of materials, editing Draft 9 in iMovie, and relying, at least until recently, on her digital cameras’ automatic setting so that she can shoot spontaneously. Like the “amateur” filmmaker described by Maya Deren—amateur, she reminds us, whose original meaning was lover—Leventhal foregoes the polish of professional productions (to the extent that such a choice is possible) for the intimacy and immediacy of experience captured in the raw. Draft 9, still in many ways her most startling work, is a diary of sensations, visceral, bracing, and sometimes painfully close to its subject. The film’s cuts, both the incisions it depicts and its rapid editing style, are sometimes violent, forcing the viewer to look into the gaping gills of a still-wriggling fish, the skinning of a deer, a cast removed by a small whirring saw. We may flinch at some of these images, but Leventhal stops short of cruelty. As she explains in a monologue in 54 Days this Winter 36 Days this Spring for 18 Minutes (2009), there is both the sway of strong, overwhelming emotion, but also a “super-conscious” that “absolutely knows when she could cause harm and stops.” Leventhal doesn’t aim to destroy, but to dismantle that which separates herself, her body, her senses, from the things that surround her. As Chris Stults astutely observes, her films pose “an effort to reduce the barrier between her and the rest of the world, whether human, animal, or inanimate.” This boundary is most forcefully broken in Show and Tell in the Land of Milk and Honey (2007), when a cow she’s filming approaches and abruptly head-butts her. In Leventhal’s films, cinema is not only a window, but a surface, a site of haptic contact, and it can sometimes leave a bruise.

Draft 9 contains gentler moments: Leventhal and a woman making a bed, boys playing soccer, and an orange tabby who happily receives a vigorous petting. In one scene Leventhal shares a bagel with her grandmother at a bustling Jewish deli. Leventhal trains her camera on an elderly man sitting next to her grandmother, and asks if she can film him. “She likes people,” her grandmother explains, but the man knows there’s more to her question. “She saw something here,” he says, smiling and pointing to his forearm as Leventhal zooms into a row of dim blue numbers. “You’re taking a picture of a true survivor,” he says. While it’s easy to be swept up by the frenetic, often dizzying shifts from one shot to another, such moments anchor the work in a set of deeper thematic issues threaded through all her films, namely Jewish heritage, the complexities of contemporary Israel, and the ways both have shaped her family and her sense of home.

Although Leventhal’s films explore primarily intimate spaces, whether bedrooms and bathtubs or, as in Hearts Are Trump Again (2010), a web of silks that reveals a spider lying in wait, they also reveal a strong political and essayistic strain. Among the elements she assembles into collage, we see glimpses of the outside world: in 54 Days, for example, a small television broadcasts a news report on the wall built in the West Bank, and in Skim Milk and Soft Wax, Leventhal travels to Palestine to film the country directly. Though she shies away from overt commentary, she integrates the Israel-Palestine conflict through personal reflection and direct experience. In Show and Tell, for example, she describes, with the camera pointed up to her cross-legged figure, a period in which she lived on a kibbutz in Israel, imagining the country to be a promised land, a land of plenty. Such promises, fashioned from the stories of her youth, were inevitably broken, however: Leventhal worked first in a metal factory, then, after being sexually harassed by her employer, moved to a chicken farm. When asked to collect the diseased hens, she mistakenly thought they might receive veterinary care, then realized they were to be sold to Palestinians.

Leventhal’s ceaseless travel in her films—she’s almost always moving, whether on a bike, rowing a canoe, or riding a train, plane, or horse-drawn carriage—might be understood as part of this search for what might be a impossible place of belonging. For her father, Israel represented an idea of home, and in Skim Milk and Soft Wax he travels with Leventhal to show her “the Israeli experience.” Rather than film her surroundings, however, she films her father’s eye in close-up, much to his chagrin. It is perhaps her father’s eye, his way of seeing, that she is most urgently compelled to explore. When Leventhal and I spoke on the phone, she recounted a scene she later cut from Skim Milk and Soft Wax, a reenacted memory of herself and her sister as young girls, left alone by their father in a Tel Aviv apartment, the water running in the faucet as if he were doing the dishes. “That scene doesn’t exist anymore,” she told me, but the pain of familial abandonment, of a home that no longer feels like home, haunts her work nevertheless.

In many of her videos, Leventhal mixes diaristic fragments with performances staged for the camera. The latter are no less real than the more aleatoric elements; Tin Pressed, for example, begins with a shot, the camera lying sideways on the ground, of someone kicking Leventhal. She’s curled and flinching, and it’s evident the jabs are as real as the injured knee she examines in Draft 9. Here again her body is as much the medium, the record of experience, as the DV tapes on which they’re filmed. But as the staged quality of the kicking scene indicates, the videos are more than raw experience, but spaces of enactment, of imagination, and, like the scene cut from Skim Milk and Soft Wax, of sometimes traumatic memory.

Shayne’s Rectangle, made eight years after Draft 9, shows how much Leventhal has matured as an artist. Considerably quieter, slower, and more meditative than its predecessors, it is also constructed differently. As Leventhal has described, she wanted to make a film that would heal her sister’s illness, and she set out to find or create images she had already envisioned, rather than collect them in the more haphazard manner of her previous work. The shots are longer and more layered, though no less vivid; in one scene, for example, we see a rustle of bright green leaves, then a spotted deer hidden within them, an echo of the skinned hides in Draft 9. We also see, in an early shot, Leventhal kneeling in prayer, her forehead touching the pavement, once again making contact with the world she films.

This is also a world she conjures, and Leventhal employs, for the first time, subtle effects. Some of the footage was shot on 16mm film, lending a grainy softness, not to mention brilliant yellow flares, to the film’s imagined space, which also includes the sound of a film projector and a pile of gravel buzzing with mysterious red light. The film, as Leventhal describes, is about “reseeing things,” turning them on their side so that the ordinary might reveal something extraordinary: an orange heater to warm a small room or a sky lit with lightning and film grain. With Leventhal’s head bowed in prayer, Shayne’s Rectangle is an offering: a filmed world, a world in film, and a vision to heal a troubled world.