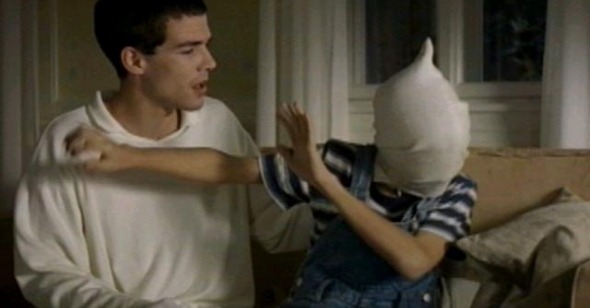 Writing about Michael Haneke‚Äôs notorious Funny Games in the May 1998 issue of Sight and Sound, Richard Falcon admitted that the film had shaken him to the degree that he was now plotting revenge. ‚ÄúAs the end credits rolled,‚ÄĚ he began, ‚Äúa particularly pathological thought crossed my mind: the most suitably lucid, situationist‚Ä¶ and cruel way to conduct an interview with its director would be to arrive‚ÄĒlike the film‚Äôs antagonists‚ÄĒwith masking tape, a golf club, and surgical tape. Perhaps then, in a funny game between interviewer and filmmaker, we could get to the bottom of our perverse desires as spectators.‚ÄĚ

It would take a singularly unsettling film to provoke so strident a reaction in a civilized journalist‚ÄĒFunny Games fits the bill. Falcon invokes Antonin Artaud‚Äôs ‚ÄúTheatre of Cruelty‚ÄĚ in his article, settling on its central tenet‚ÄĒ‚Äúcruelty is above all lucid‚ÄĚ ‚ÄĒas an appropriate epigram for the film. Lucidity is the hallmark of Michael Haneke‚Äôs cinema: His films, from The Seventh Continent (1989) through last year‚Äôs well-received Cache, locate their power in precision. Funny Games, which a professor of mine refers to as ‚ÄúLast House on the Left in Tennis Whites,‚ÄĚ is undoubtedly precise‚ÄĒit works. The question is, to what end?

‚ÄúIn order to attack a genre, you must first establish it,‚ÄĚ says Haneke, and the film does a bang-up job setting us up for a nifty little home-invasion thriller. Two impeccably polite youths descend upon the summer home of a wealthy couple (named, like all of Haneke‚Äôs couples, Georges and Anne) and take them hostage. The family doesn‚Äôt see them coming, but their arrival is no surprise. Neatly appointed households like George and Annes exist‚ÄĒat least in cinematic terms‚ÄĒto be subjected to assault, just as kitchen knives left carelessly on the decks of sailboats outside the neatly appointed households exist to be retrieved at opportune moments in nail-biting home-invasion thrillers.

So far, so predictable: We‚Äôre firmly within genre territory. (Watching the film a second time, the opening credits, which describe the family‚Äôs car ride to their cottage and arbirtraily impose screeching John Zorn music over the sedate classical tunes emanating from their CD player are a dead giveaway of the film‚Äôs true direction, but this will likely not occur to first time viewers.) Haneke‚Äôs precision is evident: In less than a dozen shots, he communicates the layout of the summer house, and strews a buffet‚Äôs worth of red herrings‚ÄĒ(the aforementioned kitchen knife), a VCR remote control‚ÄĒa bag of golf clubs that we viewers can begin speculating about. This, we think, is gonna be good. And for about twenty minutes, it is. And then one of the villains looks into the camera and winks at us.

It‚Äôs a startling moment, and then it gets worse. ‚ÄúWhat do you think will happen?‚ÄĚ asks one of the bad guys plainly, his gaze meeting our own. (The victims always look just past us). ‚ÄúDo you think they‚Äôll make it?‚ÄĚ A ‚Äúbet‚ÄĚ is placed that the family will be dead by dawn. The rest of the film is devoted to the villains holding up their end of the wager. The film is fucking with you: You came expecting a horror-show, and so here it is. After the murder of the couple‚Äôs young son‚ÄĒwhich, like most of the violence in the film, takes place demurely off-screen, while Haneke‚Äôs camera is somewhere else‚ÄĒthe meaner of the two villains (Arno Frisch, from Benny‚Äôs Video, 1992) chides us: ‚ÄúWe can‚Äôt stop now. We‚Äôre not even at feature length yet.‚ÄĚ

Message received: It‚Äôs all our fault. The story is only unfolding because we‚Äôre watching it. ‚ÄúMy goal,‚ÄĚ said Haneke in another interview, ‚Äúwas a kind of counter-program to Natural Born Killers. In my view, Oliver Stone‚Äôs film, and I use it only as an example, is the attempt to use a fascist aesthetic to achieve an anti-fascist goal, and this doesn‚Äôt work. It might be argued that [Stone‚Äôs film] makes the violent image alluring while allowing no space for the viewer. I feel this would be very difficult to argue about Funny Games.‚ÄĚ

Indeed. Funny Games is all about the viewer. It‚Äôs apparent that the victims‚Äô agony is for the audience‚Äôs benefit and that the bad guys have supernatural powers usually associated only with film directors‚ÄĒafter one of them gets shot, his companion grabs a VCR remote and ‚Äúrewinds‚ÄĚ reality, reviving his pal and proving once and for all that there is no hope within this onscreen universe. This is a snuff narrative in which the guilty not only go unpunished but wind up free to continue the cycle‚ÄĒthe movie ends with a wink and a smile and the promise of an identical home invasion a few cottages down the lake.

During interviews for Cach√©, Haneke cited an old German expression that translates, roughly, to ‚Äútelevision is there for switching off.‚ÄĚ Funny Games is a film of exquisite craft and self-defeating aspirations. It‚Äôs there for turning off.