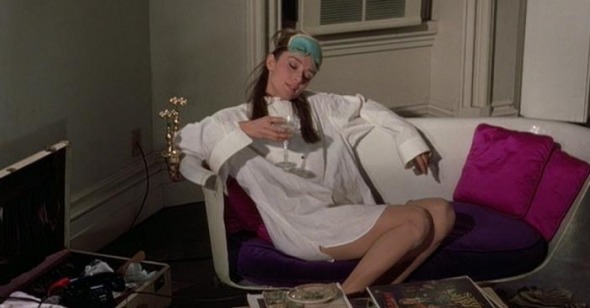 It’s early morning. A fantastical mazelike image of New York City shimmers like a diamond on glass as a few lilting notes of a pleasant melody begin to play. Holly Golightly (Audrey Hepburn), the apotheosis of chic in oversized sunglasses and opera gloves, floats onto the screen on a wave of gently plucked guitars and a dreamily swelling chorus of open vowels. Pecking daintily at a croissant, she studies the contents of the display window at Tiffany’s while we study her. The shot changes angles several times, shifting focus from the reflection to looking out at Holly from inside the store and back again, as if to draw attention to the shifting nature of appearance, to make us question who it is we are looking at.

On the surface, Holly is the consummate New York party girl—witty, charming, and utterly inscrutable. Perfectly willing to drop a titillating tidbit from her past yet claiming to “hate snoops,” brassy and seemingly independent but with a vulnerability simmering just under the surface, Holly is a bundle of contradictions. Her glamorous life is slowed down only by her responsibility to her brother Fred, who will be returning from the army soon, and a growing attraction to her neighbor, Paul Varjak (George Peppard), a depressed if dryly funny writer who is supported by an older lover (Patricia Neal). When Paul begins to fall for Holly, she resists, saying she is a wild thing who belongs to no one, just like her scrappy ginger cat—which she dramatically refuses to name anything other than just Cat.

For many grade-school girls and the parents who reared them, Blake Edwards’ classic adaptation of Truman Capote’s novel was treated as a slumber party rite of passage, a grown-up yet frothy romance about a young woman who somehow manages to overcome her cumbersome fabulousness and face life’s responsibilities in order to find true love. However, the observant preadolescent will eventually realize that something doesn’t quite add up in the film’s seemingly wholesome portrait. What does Holly mean when she says any decent man will pay a lady $50 for a trip to the powder room, and why are there men violently banging at her door at all hours of the night? The mesmerizing swirl of jewel-toned cocktail dresses and easy-swinging jazz, and a handsome—if curiously effete—George Peppard gave way to the hard truth that Breakfast at Tiffany’s is not just a fairy tale, but the story of a prostitute and a kept man struggling to survive amidst failure, self-loathing, and denial in a gritty New York, reaching for the fantasy of New York glittering just beyond their reach.

Breakfast at Tiffany’s is full of code words that obscure its more unsavory elements, such as “the candy store,” which refers to Holly’s illegal meetings with the gangster Sally Tomato, or Holly referring to the sugar mama who keeps Paul in typewriter ribbons and bespoke suits as his “decorator friend.” These euphemisms are uttered in the interest of discretion and protection but also as a kind of wry, adult acknowledgment of the truth of the matter, a sign that Holly and Paul very much understand one another’s ethically questionable lifestyles. A more poignant, if unexpected collaborator in the ruse that is Holly’s glamour is composer Henry Mancini, whose complex candy-pop score remains one of the film’s hallmarks.

Who can forget Holly Golightly experiencing a rare and plain moment of calm on the fire escape, accompanying herself on the guitar to Mancini’s “Moon River” in all its schmaltzy glory? Or the elegantly frenetic clangs of her cocktail party, which she presides over in an artfully draped bedsheet? The relentless score has a sophisticated, cartoonish quality, like the soundtrack of old Tom and Jerry animations from the same early 60s era. It is jazz in the contemporary vein and wedded to the action, both integral and integrated. The music and occasional playful sound effects shift effortlessly from the lyrical to the chaotic, from the timeless lullaby of “Moon River” variations, to a peppy chorus of “doo’s” when a more carefree Holly explores the city hand-in-hand with Paul, to the snappy, frenetic sound when she runs out of a five and dime with stolen goods that seems to approximate the “Pop! Whiz! Bang!” of a superhero comic.

While moments of sinister drama or sharp surprise are dropped throughout the score, there is only one musical cue in the entire film that directly faces the reality of Holly’s existence. She has just returned from a costume ball with her Brazilian diplomat boyfriend José and is dressed, appropriately, as some sort of ballerina princess, complete with tiara. She opens a telegram at the door, and after reading it suddenly loses all composure, breaking things, crashing about the apartment and screaming. Her beloved brother Fred has died, and José is more concerned about his political reputation than his lover, so it’s Paul who must come in and hold Holly until she collapses in tears. But here a truly unnerving thing happens; there is an overhead shot, unlike any in the film, of Holly lying prostrate on her bed among the wreckage, feathers swirling around her. The only light source is from the open door where José, still too afraid to come in, casts a subtly menacing shadow. In a break from all his pop and charm, Mancini delivers a single dissonant piano glissando—avant-garde and horror-worthy. This moment shatters the film’s façade of glamour on every level, from the image of our intrepid Holly unraveled and undone to José’s unmanly distaste for her distress. Yet neither the off-camera specter of death nor the images of chaos are quite as jarring, nor so viscerally disturbing, as that cat-scratch sound that pierces the harmonious soundtrack, destroying our ability to be buoyed along by style and fantasy, forcing us to look into the pain and insecurity that undercuts Holly’s rudderless existence.

This glissando calls into relief the film’s many unexpected silences and the circumstances of how they are broken. When Paul first knocks on Holly’s door she answers looking disheveled, wearing an outlandishly ornate pair of earplugs and an unconcerned expression regarding the fact that she is unable to hear him. The scene is unusually lacking in any music from Mancini. Shortly after she is forced to pull the plugs and have a conversation with Paul she stumbles over to the record player to put on her own music, as if the silence in the film, instrumental in maintaining the fragile fantasy, was as unbearable to her as it was unnerving to the audience. Even more telling are the silences that are suddenly punctuated by sharp, unexpected hits of cool jazz, such as the sweet high note that rings out into the air when we first meet Cat, a weathered vagabond who reflects Holly’s personality and at times her unexpressed emotional state. At nearly every turn, Mancini’s beautiful, melodic score serves to further propel the idea of Holly’s glamorous life, convinces us of her perfection and happiness. That is, until we aurally confront the darkness under the surface; the false appearances of Holly’s life are thus suddenly not just ironic but truly saddening.

It sometimes feels as though that irreconcilable sound is what forced me to see the characters’ struggle. This discordance cast the film in a darker light, but also revealed its unexpected complexities. Over time the element that continually rings false is the film’s famous ending, in which Holly plans to run away to Brazil on her own, throwing her precious, unnamed cat out into the rain to prove she is a wild thing, but changes her mind at the last minute in the wake of Paul’s impassioned, if clunky, speech about life and love. A few years down the line I discovered that in Truman Capote’s novel, almost everything is the same other than the fact that Holly swears like a sailor and that in the climax she gets on that plane and is never heard from by Paul Varjak again. Apparently this was one lie too dear to uncover, though the dramatic inversion of “Moon River” that Mancini uses here crescendos to an anxious shrillness uncharacteristic of a romantic finale. It should be regarded as an alarm bell. Reading the end of the novel, I had the same epiphany I had upon discovering Holly’s profession; of course this is what this story is about, and how naive of me ever to have ever heard otherwise.