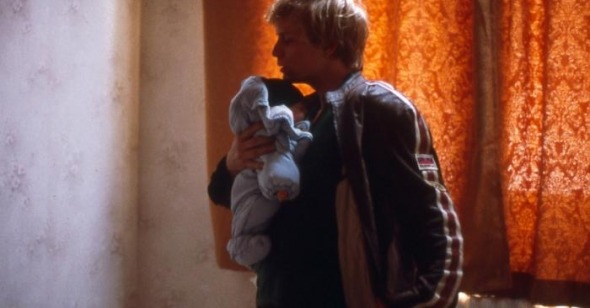 Great artists are also, necessarily, predictable artists. Novelty is very rarely the stuff that canons are made of; “greatness,” whatever it may be, is most often accorded an artist on the basis of a cohesive body of work (even if it is still in formation) and an identifiable assortment of thematic and stylistic traits. This doesn’t mean that familiar artists can’t still surprise us, but that surprise is predicated upon—and past that initial disruption of expectations, swallowed back into—that same familiarity. On a certain level, what we search for in those art works and artists that matter to us is a sense of integration, that indefinable but still confident feeling that all their many elements—words, sights, sounds—are directed towards a fixed, tangible goal.

Consider a moment about two-thirds into Luc and Jean-Pierre Dardenne’s L’Enfant: our antihero Bruno (Jérémie Rénier), having sold his infant son to a black market adoption ring and now scrambling to retrieve the child after the understandably perturbed mother Sonia (Déborah François) is hospitalized for hysteria and threatens to call the cops, rendezvouses with the baby merchants at a dilapidated row of garages. Entering the designated shack, he is addressed by an unseen party from a small window high up the wall, who orders him to hand back the money he had received earlier that morning. Passing the wad of bills to the gloved hand in the window, Bruno anxiously inquires whether the child is outside—and the only answer he receives is the prolonged sound of the bills being methodically flicked and counted by a well-schooled thumb, the muted, neutral sound of paper against paper somehow as harsh and heartless as the snapping of a whip.

The duration of this moment already places it firmly within the Dardennes’ resolutely materialist conception of cinematic time. No less than their earlier films, the vast majority of L’Enfant’s duration is comprised of the sheer process of doing things in the world: taking a bus, waiting for an elevator, climbing the stairs, moving from place to place. In drama à la Dardenne, action, events, and consequences are not absent, but rather emanate from within the processes of everyday life instead of as a spectacular intrusion upon it—even if Bruno’s selling of his infant son, no less than Olivier’s encounter with the killer of his in the Dardennes’ previous film Le Fils (The Son), certainly does touch upon the spectacular.

Yet the Dardennes’ considerable strategic and stylistic carryover from film to film does not bespeak anything so reductive as a formula. What places the brothers at the peak of contemporary narrative cinema is that their methods are not simply exterior effects impasted upon value-neutral material (the sluggard’s definition of auteurism), but part of a coherent, predetermined organizing principle unique to each iteration. While that bobbing, handheld camera is clearly their most noticeable method, its repetition from film to film is not just providing something as banal as surface “immediacy.” More than their signature, it is a flexible instrument that combines in subtly different ways with the respective, deep-rooted schemas that are distinct to each film.

Their suspiciously analogous titles aside, therefore, there is a world of difference between L’Enfant and Le Fils. To put it simply, where the earlier film was about having everything in its right place, L’Enfant is premised upon ceaseless exchange—predominantly monetary, but going well beyond any vulgar Marxist critique. While the irony of Bruno’s midfilm declaration that “only fuckers work” has already been pointed out by a few astute commentators (what else is Bruno’s scrounging, thieving, hand-to-mouth existence but a constant process of work, and one that consumes his existence well beyond nine-to-five?), the Dardennes are not only etching a sly portrait of Western society’s proletarianization of the unproletarianized. Beyond Bruno’s involuntary location on the social spectrum, his entire willed existence is predicated upon an unending process of exchange. In the film’s first half hour, he cavalierly trades his apartment to a pair of friends (a nasty surprise for Sonia when she returns “home” with her new baby); switches his tattered panhandling sweater for a slick leather jacket at the end of the workday; uses all the cash from his latest swindles to buy a pram, a day’s use of a convertible, and a matching leather jacket for Sonia at the expense of food and lodging; and even tosses in his neo-Belmondo snap-brimmed chapeau for a better shake on a contraband deal.

From very early in the film, then, the Dardennes redirect the finely honed materialism of their narrative technique in two significant ways: a) By having Bruno quickly dispense with his hat and (soon after) his jacket, they strip him of the kind of totemic accoutrements that define Olivier in Le Fils (overalls, tool belt, carpenter’s rule) or Emilie Dequenne’s Rosetta (red coat, gumboots, hair dryer), those objects that help them to define themselves against a harsh and oppressive world. And b) correspondingly, by having Bruno, unlike the fiercely grounded, jealously proprietary protagonists of those earlier films—each ruthlessly in control of their immediate surroundings and their immediate selves, even if both discover within those selves mysteries that are inexplicable and uncontrollable—living in a state of constant, heedless flux, discarding money, clothes, lodgings, and child with abandon.

Where those two previous films explored the inner mysteries of their solitary, withdrawn protagonists through journeys outward—a reengagement, whether willing or not, with the social world—L’Enfant plumbs the professionally gregarious Bruno’s unknowing self by a journey inward. Completely externalized and happily unbound, Bruno will experience his unspoken epiphany as a gradual discovery, inexplicable and inexpressible to himself, of those things that do hold him, do ground him—even if his genuinely tearful pleas to the unyielding Sonia to take him back (after she has reclaimed the child and marched fiercely away from its penitent “rescuer”) are immediately accompanied by a pathetic request for food money.

To their credit, the Dardennes refuse to frame this scene as implicit condescension. Like Olivier and Rosetta, Bruno is not a sociological found object to be defined by those social forces that shape and work through him; but neither is the Dardennes’ humanism of any sentimentally otherworldly variety. Awareness, the cold comfort of clarity, is the final reward for the Dardennes’ resolutely earthbound protagonists, not salvation. Money is not the base material that Bruno must transcend on his path to self-realization but the medium of that voyage’s expression, and its exchange the syntax of his private language. And Bruno’s final redemption, appropriately, doubles as both spiritual and fiscal: yet another exchange of money for a human being. It is not too far an interpretive leap to suggest that that earlier refund in the dank garage marks the first hesitant station on Bruno’s secular Calvary, the coldly efficient snap of each bill methodically measuring out not only the value of the tiny life he sought to profit from but also the stunted life he leads—as with the verdict on the count, perpetually one short.