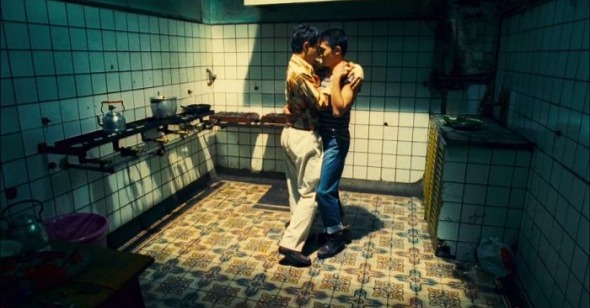 The Tempest
Matt Connolly on Happy Together

Sixteen years after its release, Happy Together continues to be that rare beast: a queer film by a celebrity art-house auteur who has not staked his or her reputation on the chronicling of LGBT experience. Wong Kar-wai’s tale of the dissolution of the relationship between two men from Hong Kong after they pick up and move to Buenos Aires marks the only significant engagement with same-sex desire in a career loaded with (actual and would-be) heterosexual couples. The anomalous choice of subject matter raises the question of why Wong chose to switch things up this one time, but perhaps the more fruitful inquiry lies in considering how gay romance looks when refracted through the authorial prism of Wong’s aesthetic and thematic predilections. Do the queer romances at the film’s center become one-to-one matches for their straight counterparts elsewhere in Wong’s oeuvre, or does this brief encounter between recognizable directorial vision and atypical topic tweak the inner workings of Wong’s style? The answer, perhaps unsurprisingly, seems to be a little of both.

On the one hand, the emotional volatility of couple Lai (Tony Leung) and Ho (Leslie Cheung) marks Happy Together as perhaps Wong’s stormiest film. Having come to know the director through his tales of swooning romantic repression and regret (In the Mood for Love; 2046), I recall being shocked by Lai and Ho’s shouting matches, slammed doors, and unceasing cycles of bitter recriminations. Their relationship ends within days of the two men arriving in Buenos Aires, with Lai going to work at a local nightclub to make ends meet while Ho attaches himself to a series of sugar daddies before bottoming out and ending up back at Lai’s doorstep, bloodied and broke. Lai nurses Ho back to health in his cramped apartment, briefly rekindling the spark between them and clueing the viewer in to what the two ever saw in one another. (Wong marks this new chapter by segueing from black-and-white to color.) Their slow dance in the apartment building’s communal kitchen is one of Wong’s most achingly perfect images, suffused with eroticism at once smoldering and evanescent. Inevitably, though, Ho’s infantilism and selfishness—not to mention Lai’s emotional reticence and resentment—bubble to the surface, launching the couple into a series of domestic blow-outs that splinter them apart yet again. Wong’s penchant for almost-obsessive narrative repetition comes to the fore here, with fight after fight wearing the viewer down almost as much as it exhausts the two men.

An uncharitable reading of Happy Together might find Wong’s decision to make his only queer couple one of his most unstable as a tad retrograde, a sop to the free-floating cultural notion that the combined virility and aggression of two gay men makes for relationships that burn hot and fade quickly. Certainly, the couple’s sole spit-and-go sex scene early in the film has an intensity that borders on the animalistic. What elevates Happy Together beyond this is Wong’s shading of Ho and Lai’s interpersonal failings, locating it both within Ho and Lai’s specific incompatibilities and the creeping specter of social stigma that entraps the couple in such close, combustible quarters. Lai and Ho’s life as foreign gay men constrict their lives in various and subtle ways, and not just in the studied lack of details that Lai gives about his personal life to anyone around him. When asked by a co-worker about the identity of the person whom he’s calling, for instance, Lai labels Ho a “friend.” Lai’s string of low-paying gigs at restaurants, clubs, and slaughterhouses and Ho’s quasi-prostitution illuminate the couple’s limited economic and social viability—a point that Wong admirably does not spin into moist-eyed pieties. Lai’s apartment becomes the only space where the realities of their relationship can be aired without self-censorship, their only refuge from a vivifying but relatively inaccessible world. It’s a world that Wong and the great cinematographer Christopher Doyle capture unforgettably. (Rarely has a film wedded grainy, rough-and-tumble aesthetic dynamism and sun-streaked poetic contemplation so effortlessly.) Happy Together’s tragic irony, of course, is that Ho and Lai’s domestic life offers anything but refuge. Within the grimy confines of Lai’s apartment, old wounds fester and eventually explode, with the interpersonal shrapnel bouncing off the walls and slicing right back into the two men’s minds and hearts. Doyle’s captures this claustrophobia with stunningly lithe and intimate camerawork, oscillating between evocative depth compositions and squirm-inducing close-ups of Lai and Ho as they scream and seethe.

In the midst of this squall of emotional bile, Lai befriends Chang (Chang Chen) a fellow Taiwanese expat working in the Chinese restaurant where Lai finds employment after a violent outburst gets him fired at the nightclub. Quiet yet slyly inquisitive, Chang seems poised to be a romantic replacement for Ho in Lai’s life. (His is the only other voiceover besides Lai’s that we hear in the film, and Chang’s thoughts mostly seem to revolve around Lai.) However, Wong keeps Chang’s sexuality murky—he expresses interest in the quality of women’s voices, even as he brushes off a female coworker’s advances—and the two men’s bonding over alleyway soccer games and late-night drinking sessions stops short of the bedroom. Happy Together’s shift from Lai and Ho’s tempestuous domestic quarrels to Lai and Chang’s tentative would-be/might-be pairing offers a welcome tonal change-up, but it also points to the other major way in which Wong injects his brand of swooning romantic ache into a gay context. If Lai’s relationship with Ho showcases the roller-coaster reality of coupledom, his nights with Chang showcase the bittersweet possibility of true happiness—a possibility that, as in many of Wong’s films, becomes at once tangible and impossibly out of reach. Here, the impediment is not personal pathology (as seen in Chungking Express’s chronicling of a young woman’s stalker-ish obsession with a police officer) or the threat of cultural sanction (the look-but-cannot-touch yearning of In the Mood for Love’s married neighbors), but the ambiguity of sexual attraction itself, and the concomitant fear that broaching the question will soil a relationship’s seeming innocence. The film’s striking narrative structure—with romantic disillusionment preceding romanticized hope—gives Lai and Chang’s scenes a particularly poignant edge. Lai’s bitter experiences with Ho should theoretically leave him wise to the pitfalls of heartbreak, but instead it leads him straight into emotional ambiguity and moist-eyed yearning for a perhaps-impossible dream.

This double vision becomes embodied, as it often does in Wong’s films, in physical totems that the characters cling to obsessively. The first comes at the film’s beginning and hangs over the Happy Together as a kind of kitsch specter: a glowing paper lamp with a painting of the majestic Iguazu Falls, which lay on the border between Argentina and Brazil. Lai and Ho planned to visit the falls upon arriving in Buenos Aires. It becomes both an aching time capsule of their collective dream and a reminder of their failure to achieve it. While the lamp remains a constant presence throughout Happy Together, however, Wong intriguingly bookends the film with extended aerial shots of the falls themselves, a deep blue vortex of churning water and vapor which the camera circles above with contemplative serenity for an extended period of time. If the lamp acts as a garage-sale symbol of Lai and Ho’s unconsummated hopes, the falls themselves feel closer to the spirit of their relationship itself: volatile, hypnotic, all-consuming. By film’s end, though, Lai has visited the falls (alone) and has moved onto another cherished, emotion-laden item. Visiting Taipei before returning to Hong Kong, he stumbles upon a food stand run by Chang’s parents. He identifies the family through a photo of Chang stuck to the side of the stand, which he surreptitiously steals. It’s a simple, even banal, snapshot, but it holds within it the elusive promise of contentment heretofore unknown. For all of the ways in which his same-sex desire adds complex and vivifying new wrinkles of the director’s authorial vision, then, Lai is a Wong tragic-romantic through and through.

As Lai boards the air tram and fades into the neon rush of the city, the titular song’s chorus blasts over the closing images: “I can’t see me lovin’ nobody but you for all my life!” Few other directors could allow us to appreciate the depths of that seemingly innocuous refrain. It’s a promise of eternal fidelity, yes, but a pledge contingent upon the parameters of the lover’s own vision. And if Happy Together reveals anything, it’s how poignantly, painfully limited that gaze is—regardless of who holds it and whom it happens to fall upon.