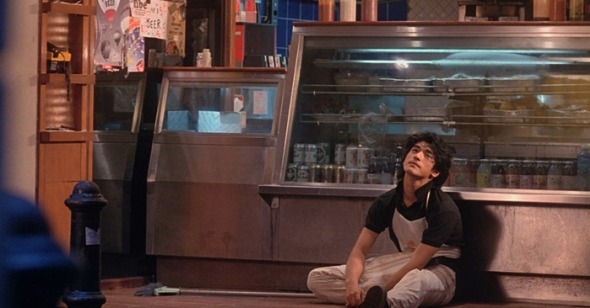 They come out at night, those folkloric, bloodthirsty wraiths; but so too the vagrant mortals populating Wong Kar-wai's 1995 twilit tale of unrequited passion, Fallen Angels. These vanquished beings, these rebels of the neon god, may subsist in the witching hour, yet they yearn for the blessings afforded the social and urbane: the pleasure of a warm communion, the comfort of a mutual intimacy, the breadth of a lasting romance. Constrained by limitations both professional and physical, the five central characters comprising Wong’s mirrored narrative proceed in cyclical patterns, as if caught in a chain of criminality and confusion. Our “heroes”—a hit man and his lovelorn partner; a mute, ethically dubious ex-con; a scorned lover; and a blonde femme fatale—such as they are, all seek escape, yet seem to reside in the shadows as a step toward the light would require a courage they have yet to fully muster. These tumultuous emotional coordinates, charted via Wong's achingly beautiful montage, render Fallen Angels the most existential of action flicks, a fluorescent fever dream of kinetic energies and inarticulate amour fou.

In his recent piece on Chungking Express, Michael Koresky noted the loose, episodic nature of Wong's 1994 narrative, suggesting its utilitarian construction capable of accommodating additional or even completely fresh variations on its central theme. And indeed, early versions of Chungking Express comprised a third storyline concerning the unconsummated relationship between a gunman and his female accomplice. This supplementary scenario would ultimately lay the foundation for Fallen Angels, like Chungking a diptych account of affection and alienation in contemporary Hong Kong. If Wong's chosen dramas feel less serendipitous here than in Chungking Express, Fallen Angels still represents intuitive filmmaking of a rare order. Both of a piece with its predecessor—thematically, stylistically, and conceptually (actors, locations, and plot details overlap and shade one another throughout)—and yet tragic in a way that the day-glo optimism of Chungking Express never fully concedes, Fallen Angels is at once companion piece and logical culmination to the first phase of Wong’s career.

Yet for a film so resigned to the distance, both collaterally established and self-imposed, one must traverse in an attempt at companionship, Fallen Angels is surprisingly soulful in execution. In the opening scene we meet Wong Chi-ming (Leon Lai) and a nameless female agent (Michele Reis) discussing the moral boundaries of their partnership. And from there the two are separated, meeting only once more during the film. Wong treats their distance as an irreconcilable divide, his violent acts of professional obligation a blunt lesson in any outward ambition (“The best thing about my profession is that there's no need to make any decision”), her small but tenacious gestures—digging through his trash, haunting the bars he frequents—a symbol of her naïve devotion. Not only can these two not meet, but for the very same reasons they shouldn't meet. As with most doomed romances, a series of misgivings and mistakes—the latter facilitated by Blondie (Karen Mok), an irrepressible prostitute who lures our dejected assassin only to further confuse him—have dire ramifications. These two will likely meet again, though neither in the setting nor the capacity either could have imagined.

It's not, however, all melancholy and quiet longing. The second major plot strand centers on Ho Chi Moo (Takeshi Kaneshiro), the aforementioned mute ex-con living with his father while moonlighting as an opportunistic desperado, assuming control of various take-out joints and effectively holding them hostage during off-hours. Echoes of both Chungking Express and Fallen Angels’ concurrent hit man narrative resonate throughout Ho’s dizzying moonlit escapades: both Ho’s impromptu business ventures and curious disability—brought on, to hear him tell it, by excessive pineapple intake—trigger images of similar locales and addictions in Chungking Express, while an unwanted tagalong named Charlie (Charlie Yeung) drags Ho across the city in search of an elusive blonde (“Blondie”) whom she claims stole her boyfriend. At one point, even Ho's hair begins to turn blonde, further blurring the identities of these characters, until the final sequence enacts one last role reversal which appears to set these wayward souls off into the next chapter of an ongoing tale.

After Fallen Angels, Wong would narrow both his narrative and aesthetic focus, burnishing a style that, by the mid-nineties, had already become almost self-referential. Also companion pieces of a sort, Happy Together (1997) and In the Mood for Love (2000) each took just two characters as their subjects, reining in some of Wong and cinematographer Christopher Doyle's more outwardly hyper-realistic techniques, resulting in perhaps the most mature, emotionally textured work of Wong's career. In many of his early films, including Fallen Angels, beauty’s rendered as a ballet of cascading bullets, emotion as the drop of a needle in a lonely jukebox, pop-culture as a neon nightmare of gaudy fashions and junk-food hedonism. But even considered amongst his larger corpus, there’s a singularly bravura unpredictability surging through Fallen Angels that continues to restore one’s faith in the extremes of the Wong archetype. If there's a hint of optimism in the film’s finale, as the camera tilts skyward to catch a glimpse of the break of dawn, it’s not without the knowledge that there's nothing awaiting these characters in the light of day. Luckily, tomorrow's another night.