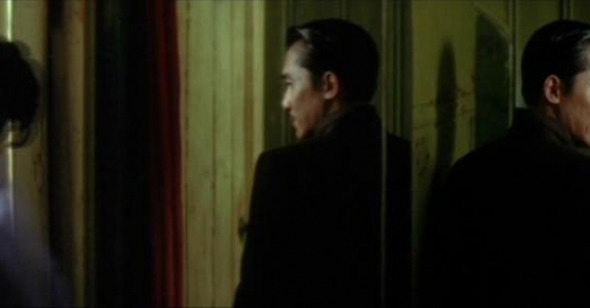 “If someone wants to leave 2046
How long will it take?
Some people get away fairly easily.
Others find that it takes them much longer.
I forget how long I’ve been on this train.
I’m starting to feel very lonely.”

Given that Wong Kar-wai so thoroughly inhabits cinema with a uniquely expressive visual vocabulary, I’m surprised to now realize 2046 is the only one of his films I’ve managed to see on the big screen. That this theatrical viewing coincided with the apotheosis of a brilliant career I consider a stroke of happy serendipity, which perhaps partially explains why this work looms so large for me. Like Before Sunset, this continuation of characters from an earlier film, in this case In the Mood for Love, rejuvenates and deepens the possibilities of the oft-scorned term “sequel,” which typically indicates nothing more than a passionless cashing-in on an established brand, worlds away from the glorious expansions proved possible by Linklater and Wong.

The number 2046 represents certain concrete facts: the hotel room where Chow (Tony Leung) spent so much time writing martial arts serials with true love Su Li Zhen (Maggie Cheung); the Oriental Hotel apartment next to his which paramours Lulu (Carina Lau), Bai Ling (Zhang Ziyi), and Jing Wen (Faye Wong) variously occupy; the year before Hong Kong’s special self-regulated status as a former British colony ends. From the stolidity of that simple number, Wong abstracts and spins one of the most searingly beautiful evocations of lost love ever put to celluloid.

A film about memory structured as such, with an unordered and impressionistic mimicry of the fragmentary and heightened quality of recall built into its organization, 2046 causes confusion upon an initial viewing, and no wonder. Seemingly shrouded in layers of unknowable mystery, it becomes, after a second look, stunningly lucid though still as exhilaratingly hazy as human recollection; Wong’s poetical style has never found so perfect a match in subject matter.

2046 opens with a refrain—later to be meaningfully reiterated—that suggests the following unfolding will be Chow’s journey towards emotional recovery:

“In the year 2046 a vast rail network spans the globe.
A mysterious train leaves for 2046 every once in a while.
Every passenger going to 2046 has the same intention:
They want to recapture lost memories.
Because nothing ever changes in 2046.
Nobody really knows if that’s true because
nobody’s ever come back.
Except me.”

Envisioned by the writer—now dabbling in science fiction—as a place where haunted lovers go, the setting becomes an ideal metaphor for that faraway mental zone each of us enters when newly brokenhearted. The underlying suggestion is that those who remain too long in 2046 transform over time into unresponsive creatures, delayed-response androids impervious to emotions. A perpetual red cast colors 2046 with an enveloping warmth far different from the usual descriptions of the futuristic, often reliant upon stark-white or blue-tinged auras to communicate coldness. Conjuring numbness but also filled with the heat of consuming passion, 2046 becomes a purgatory for the love-wounded, a place where you arrive either to come to terms with the past or remain eternally trapped unable to progress beyond memories of the long-lost. And is there any among us who hasn’t dwelled for a period of time in 2046?

Though Wong is always such an eloquent dealer in the minutiae of modern alienation, his pageantries of loneliness have heretofore been laced with traces of humorous whimsy, evident even in the sexual turmoil of In the Mood for Love as Chow and Su at first coyly try to put themselves in their respective wife’s and husband’s philandering shoes. This sensibility finds itself curtailed in 2046, and its lack effectively demonstrates the severe changes undergone by Chow, and the more profoundly pessimistic vision Wong has in store.

Stuck in an emotional torpor which has him treating his mistresses with an almost sadistic indifference, Chow can’t stop wondering whether Su returned his love. This uncertainty sparks our extratextual memories of 2046’s precursor: We long to tell him of how she followed him when he first left Hong Kong for Singapore, visited his empty room, caressed his cigarettes and lit one up for herself, sank slowly down into his armchair, touched what she imagined he’d touched—the banister in the hallway, the floorboards—with a supreme tenderness that bore the incontrovertible mark of love. But he doesn’t know what we know, and not knowing tortures him; so he remains in 2046.

And he is far from alone here. From another Su Li Zhen (Gong Li) he meets in Singapore—her eyes nakedly bearing the sorrow of permanent emotional scar tissue—to Lulu (or is it Mimi?), still mourning the love of her life who died young, to Bai Ling, whom Chow himself sends on an express train to 2046, this film is populated with the brokenhearted. Projecting encounters with these women into the fictional future, Chow wrestles with his demons, and the resultant work is 2046 itself, which chronicles piecemeal his slow journey back to the present. Or does it? It seems he’s on his way back when he begins collaborating with Jing Wen, as with Su before her—whom she resembles—on martial-arts serials. Herself lost in the limbo of 2046, after being separated from her Japanese boyfriend upon pressure from her father, Jing Wen heralds the first stirrings of reawakening: Though harboring feelings for her, Chow, in a small, selfless act, allows Jing Wen to use his newspaper’s telephone to make a long-distance call to her boyfriend on Christmas Eve.

He told us upfront that no one ever returns from 2046. But he also claimed that he did. Come the conclusion, we realize this final detail may have been strictly fictional. He is a writer after all, and as free to fabricate as he is to draw from his own experiences. The introductory phrase is repeated—with the noteworthy “except me” left off—and it becomes apparent in the final scenes that he is no exception to the rule either. As Chow sits in the backseat of a cab alone, his head leaning against the window, rhyming images from earlier sepia-toned scenes come to mind, shared rides home with Bai and, separately, Su, his head lightly resting upon their shoulders. The movie begins as it ends, with identical shots of that silvery “tree” hole into which you whisper your secrets in 2046:

“Before,
When people had secrets they didn’t want to share
They’d climb a mountain,
Find a tree and carve a hole in it,
And whisper the secret in the hole.
Then cover it over with mud.
That way, nobody else would ever discover it.”

You realize maybe you’ve been the vessel, that this unraveling has been Chow whispering his secrets, and now you’re left harboring them forever.