Staying In: Introduction / The House Is Black 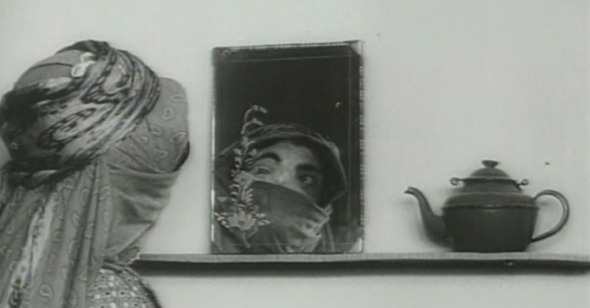 Staying In is a weekly Reverse Shot series that focuses on films our writers have viewed at home through all forms of digital distribution, from cable on demand to downloads to instant streaming. With Staying In, we hope to expand our ideas on film watching and criticism by getting out of our comfort zone— the theater.

The Way We Watch Now
By Damon Smith

These are great times to be a cinephile. That is, if you have the proper perspective on what the digital age has enabled us to access and see, perhaps for the first time, in a variety of nontheatrical contexts. Purists may argue that the degradation of original formats is akin to the death of cinema, just as headphone-allergic audiophiles decry the disappearance of vital analog information in MP3 formats. I’m the last person such people need to convince. Would I rather see a pristine 35mm print of Malick’s The Thin Red Line in an honest-to-god movie theater rather than on my 44-inch Samsung flatscreen? Undoubtedly. In the absence of such an opportunity, will I settle for Criterion’s digitally remastered Blu-ray version? You bet. How about Netflix’s Stream Instantly option, which utilizes a lower bit-rate compression technology that some regard as potentially corruptive of image quality, and much inferior to the disc version? Yes, though it depends on whether I’d be receiving the streamed film through my television (fine) or my 21.5” iMac (losing interest) or—let’s propose the most absurd option available—my smartphone (not a chance).

These are important questions to ask, because the newer modes of viewing require us to make decisions about what kinds of films we are willing to watch in nontraditional (or even unintended) formats, and under what circumstances. It would be senseless to watch a widescreen epic like Lawrence of Arabia on a tablet device, yet many may choose to do so. An episode of Weeds, however, might play beautifully on an Android. We all remember David Lynch’s 30-second rant, which went viral in 2008: “It’s such a sadness . . . to think you’ve seen a film on your fucking telephone.” How many people know that the writer-director, a pioneer of digital cinema and online video and weather reporting, signed on later that year to produce a webisode series for multiplatform distributor On Networks? En route to a major film festival last year, I sat next to a studio exec who, upon learning I was (at the time) head of programming for a digital broadcast network, bemoaned the sorry state of theatrical distribution and the destruction of the cinematic experience. After delivering an embittered rant about online distribution models and the curatorial limitations of most streaming sites, he proceeded to cue up Easy A on a three-by-three-inch seat-back screen and laugh his New York–bred nuts off all the way to City X, confirming (to my mind, at least) that his bark was bigger than his byte. When it comes to the brave new world of cinephilia, life is but a stream.

Certainly, there’s no shortage of options for online film viewing, whether the idea is to watch, rent, or download to own. Increasingly, the subscription model adopted by Netflix, Hulu Plus, and (just this past week) Apple’s iTunes Store and Amazon Prime will come to dominate the world of digital publishing and film distribution. Choosing between them will depend on the price point ($7.99/month times three or four adds up quickly) as well as the catalog of films on offer. One-time streaming fees won’t disappear, but savvy cinephiles with Internet-connected TVs or set-top boxes like Roku or Vudu will likely gravitate toward curated sites that reflect their tastes in world cinema and indie favorites, such as Mubi or SundanceNow.

What people I speak to about the sea change in how we exhibit and experience film often fail to realize, though, is the abundance of absolutely free movies available on demand, without a subscription or a console or the need of a credit card. Neither does it require creating an account or subjecting yourself to pre-roll (or worse, mid-movie) ads. As for quality, I’m not talking about back-catalog detritus, also-rans, or what used to be called straight-to-video titles either, though for every Mulholland Falls there’s a Stargate: The Ark of Truth clamoring for eyeballs and the laughably insignificant rev-share pennies that go with every 100,000 views. (Both are currently free to watch at Hulu, by the way—choose wisely.) For this inaugural “Staying In” post, I thought it would be appropriate to highlight one selection freely available to anyone in the world with an Internet connection. No geo-blocking, no Flash ads, no bullshit. A movie any self-respecting cinephile would want to see but might not know how to seek out. It was an easy choice.

Forough Farrokhzad’s now-legendary 22-minute short The House Is Black (Khaneh Siyah Ast) is one of the haunting masterpieces of Iranian cinema, and you can see it over at UbuWeb, the premier audiovisual archive for avant-garde art and poetry. Filmed inside a leper colony in the Azerbaijian capital of Tabriz by the late Farrokhzad, one of Iran’s most celebrated poets, The House Is Black has been ardently championed by Jonathan Rosenbaum, who has written insightfully about how the 1963 film anticipates the formal and aesthetic innovations of that country’s New Wave filmmakers, Abbas Kiarostami in particular. (Rosenbaum was part of the team that worked on subtitling the film for its 1997 screening at the New York Film Festival. His lengthy essay “Radical Humanism and the Coexistence of Film and Poetry in The House Is Black” is reprinted in his latest book, Goodbye Cinema, Hello Cinephilia.) While it might be hard to imagine that a compact documentary made by a first-time filmmaker with no training could have had such a lasting influence on a generation of artists, including Chris Marker and Mohsen Makhmalbaf, the film’s unusual allure can be felt almost immediately. It opens on a black screen, and a voice intones these words: “There is no shortage of ugliness in the world. If man closed his eyes to it, there would be even more.” And then: “On this screen will appear an image of ugliness, a vision of pain no caring human being should ignore. To wipe out this ugliness and to relieve the victims is the motive of this film and the hope of its makers.”

The manner in which we are introduced to the afflicted—a veiled woman gazing into a mirror, shots of children in a classroom and then playing outside, men at prayer in a mosque—are alternated with horrifying glimpses of diseased faces, puffy and grotesquely disfigured like mummified corpses. Yet the effect is not morbid or abject, as you would expect, because of how these images are rhymed and juxtaposed with arrestingly simple observations of everyday life, snatches of poetry and oration, hypnotic bits of sound, the repetition of key images, and a dynamic editing style that brings together disparate visual elements (close-ups, wide shots, canted angles, tracking shots) into a dialectic whole. Counterpoints (male and female, health and illness, faith and science) define the film. A male voice, for instance, describes the ravages of leprosy in clinical terms, asserting that it is not incurable, for “wherever lepers are cared for, it has disappeared.” His voice is alternated with the director’s, reading passages from her own poetic work (“I will sing your name, o exalted one . . . because I have been made in a strange and hideous form”) and the Old Testament in hieratic, carefully measured tones. Children recite prayers of praise to the Creator for giving them hands and eyes and senses, while we see the hollowed-out faces of people with no lips or nasal cartilage, or in the case of a woman delicately applying cosmetic kohl in another sequence, no eyelids. Farrokhzad reads at one point: “In Hell, who is it that praises you, oh God?” The beauty and complexity of Farrokhzad’s achievement lies in her brilliant intuitive grasp of cinema’s formal components—sound, rhythm, montage, narration—and its power to evoke a strong sense of identification between viewer and subject, despite the revulsion we might initially feel at observing the leprosarium’s most extreme cases. She humanizes what is gruesome.

One of the most powerful sequences—there are many—is the closing scene, again in a classroom full of children. (Farrokhzad, who died in a car crash at age 32, adopted one of the young boys seen in the foreground.) Here, as Rosenbaum has pointed out, the film breaks from documentary realism, seeming to combine scripted elements with situational truth in the manner of Robert Flaherty, or, indeed, Kiarostami. A stern-looking schoolteacher asks one of his pupils to name some “pretty things,” then some “ugly things,” and the answers provoke giggles and whispers, as well as the feeling that their suffering, though endurable, is a profound injustice against humanity. If, as the door closes on the leprosarium’s gathered inhabitants in the film’s final moment and a child scrawls the titular words on a blackboard, you fail to feel a stirring in your heart, then you might just question your own humanity.