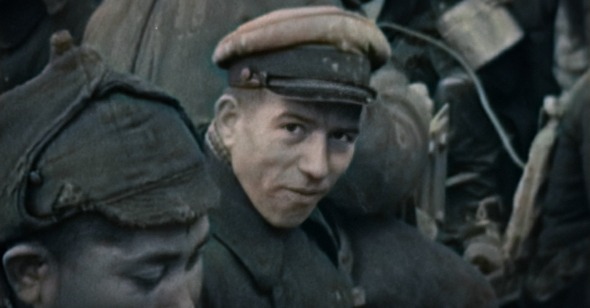 After a delayed summer festival last year, True/False returned to its regularly scheduled programming. The films I saw did not do much puzzling over the last two years; instead, and maybe quite naturally, the most intriguing films were premised upon an often performative return to the near or distant past to resolve pesky questions of home or relationships, which is to say, inevitably, questions of identity and inheritance. Nonfiction filmmaking has always seemed particularly suited to contend with these matters, if only because it was borne of the project to preserve and evaluate histories and our place within them, racial and colonial formations notwithstanding. What may often popularly characterize documentary (apart from the obvious distinction of “reality”) as a mode is the conscious effort to diagram one’s innately subjective journey through the archive, to translate and reframe its mysteries, to bring the past close, reconstructed through human eyes. And if by now that constitutes a myopic scope of what the form can actually be harnessed to do and offer, nonfiction has certainly proved boundless terrain for this particular venture nonetheless.

In his first nonfiction feature, No U-Turn, Nollywood filmmaker Ike Nnaebue retraces the fraught journey he made across West Africa as a young man, buoyed by dreams of Europe. He did not make it back then, and in fact the film is much more concerned with moments of departure than it is with any particular destination: Europe curiously becomes a distant, opaque Eden, but even cities the director ostensibly knows well—Lagos, Bamako, Tangier—feel peculiarly remote, more travelogue than lived in. The camera tracks Nnabue through crowded streets as he revisits sites laden with personal meaning, but before audiences can appreciate their weight, he is swept elsewhere, often into someone else’s story. The film, as Nnaebue explains it, seeks to unravel what drives so many (like himself) to embark on the perilous road to nations unknown with only the dim hope of a “better life.” Nnaebue’s lilting voiceover scaffolds the feature, but his earnest platitudes often emerge at odds with the harrowing anecdotes relayed by his subjects, specifically the string of women who recount their gendered experiences of migration. Among the usual troubles—scams, police, menial jobs, and wages—they also face the threat of abandonment, human trafficking, rape, and forced sex work.

These efforts to cling to hopefulness yield a compassionate, yet ultimately anodyne portrait of emigration, sorely missing a necessary critique of the forces that compel these young Africans to thrust themselves into danger. The connections between European imperialism and all the borders (to say nothing of centuries of theft) designed to confine them are glaringly absent. In a film where Nnaebue says nearly everything out loud, little is made of the mirage of Europe and the very material, dire realities that make staying put nearly as unfeasible as escape. There is, too, the question of the filmmaker’s voice, however well-meaning. His perspective remains central, and thus the architecture of the film replicates their displacement, their stories bound to a path already mapped out.

Aliona van der Horst’s Turn Your Body to the Sun takes a somewhat more conventional, yet more cogent excursion into the past, interweaving archival footage with present-day interviews. All parents are, in some ways, an enigma to their children, and so the emotional skeleton of the story is painfully familiar, even as the details are rather particular: at its core, the film concerns a daughter—in this case, Dutch writer Sana Valiulina—unraveling the mysteries left by her father, a Soviet soldier captured by the Nazis during World War II and later interned at one of Stalin’s brutal labor camps. The film reveals its thesis early on. “I’m looking for you,” Sana whispers in its opening moments, as she scours grainy footage for a glimpse of her father.

Not unlike No U-Turn, the return to the past entails a return to the place: here, the remote, snowy mountains of Siberia—hauntingly referred to as “up there”—where her father was imprisoned. Indeed, much of the film takes place on a train, where Sana and her sister pore over their father’s diaries and love letters to their mother (with whom he corresponded for years before they met), in an attempt to build a more legible portrait of the shadowy figure they knew as children, even as they cling tenderly to the vague contours of him. Elsewhere, the black-and-white archival footage flooded with color as the film tries to breathe life into these men flattened by history. So, too, the camera slows down for them, a caressing attempt to capture these individual, nameless men gazing grimly back. Sana’s father becomes expectedly representative of them in van der Horst’s weighty and haunted requiem.

In yet another extraordinary film from Juan Pablo González—perhaps best known for his remarkable debut feature Caballerango (2018)—Dos Estaciones rather slickly tests the bounds of nonfiction with its hybrid form: an elegant marriage of observational realism with performance and dramatic narrative. A foreboding sense of intrusion—namely, the threat of globalization and environmental crisis—looms over the tale of the steely, determined María García (played by actress Teresa Sánchez), struggling to maintain the tequila business that has been in her family for generations. Amid an onslaught of financial woes, “foreign factories buying everything up” and, most threatening of all, an encroaching plague destroying the region’s crops, María turns increasingly inward, until her simmering frustration culminates in a fiery denouement.

The gorgeous compositions from cinematographer Gerardo Guerra bask in the Arcadian hills of Jalisco (from whence González hails), but arguably its most shining moments are close-ups of Sánchez, who holds the camera with a captivating vulnerability. There is something all at once somber, magnetic, and often impenetrable about her countenance. On rare occasion, she smiles before her mouth slides instinctively back into a taut line. But gradually the film reveals itself as much an environmental study, always attentive to the intimacy between María, her employees, and the tight local community: from her visible attraction to the beautiful young Rafaela (Rafaela Fuentes)—whom she promptly hires after a brief meeting at a birthday party—to the respectful, if tender affinity she shares with hairdresser Tatín (Tatín Vera). María may well be a woman of few words, but the film weaves an intricate tapestry out of these moments of care: María and Rafaela dancing at first awkwardly, then vigorously in the kitchen, or Tatín lying in bed next to her lover. Unlike in No U-Turn and Turn Your Body to the Sun, the past is largely atmospheric, the weight of legacy inscribed upon María’s heavy visage or else in the sequences that catalogue more traditional, on-the-ground agricultural traditions, still required even in the face of sophisticated factory machinery. Always, there is the sense that this peace is on the verge of disruption. What survives then are these moments when one dares reach out to another.

Another artful portrait of intimacy comes from Rikke Nørgaard with Eventually, where couple Malik and Laura reconstruct the ups and downs of their relationship using actors. Eventually is more than a series of clever formalmoves, but they must nevertheless be listed: first, the film often returns to the couple in a dark, empty cinema where they watch the actors perform different stages of their relationship; secondly, the actors are not always aligned to their respective characters by gender or race. The former shrewdly allows the couple to witness their “love story” from a distance, as cinematic. In that way, they can map their evolving dynamic objectively or at least, more graciously than they had inside the relationship. In the same vein, a revolving cast invites the audience to consider the emblematic dimensions of their romance. The only pitfall may be that these actors sometimes belie how much gender (certainly in straight relationships) does tacitly shape their romance, discernible even when a man plays Laura or a woman plays Malik. This gender and race-bending seems more indicative of a generational nature of relating, exposing the cracks and contradictions of the “casual” affairs millennials often find themselves part of. But it also reminds us we can only ever be co-authors of our relationships. Eventually rather perceptively highlights what all these films seek to get at: people, places, love in transformation.