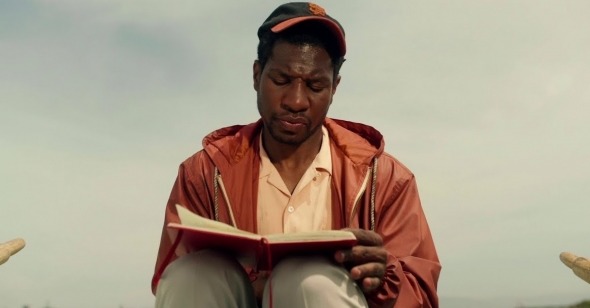 “When an event or a series of events takes place without reducing the place it has ‘taken’ to a purely neutral site, then the place reveals itself to be a ‘stage,’ and those events become theatrical happenings.” ––Samuel Weber, Theatricality as Medium

For the philosopher Samuel Weber, a site becomes a theater, and its goings-on theatrical, when it is bracketed off and enclosed, set apart from an outside that cannot be viewed. This enclosure makes possible deception and subjugation (someone is outside, in control), but also enables challenges from below. It could be otherwise. It is otherwise.

When we first see Jimmie (Jimmie Fails) and Montgomery (Jonathan Majors), the pair of artists at the center of The Last Black Man in San Francisco, they are a theater audience, watching a preacher deliver a monologue on a milk crate in a fitted dark suit. Their view––the orator center stage, framed by a barbed fence and the ruined landscape of the Hunters Point shipyard, flanked by a hazmat-suited cleanup crew he excoriates, wondering who sent them, and why––is ours until we see Mont and Jimmie watching from a hillside across the street, which is raked like an amphitheater. They are contemplating the performance: “You think he rehearses this every morning?” Jimmie asks. “It seems a bit more impromptu,” Mont replies.

That the film opens with such a scene of active spectatorship––that emphasizes the perspective of theatrical viewing and the cognitive agency it provides, despite a situation of apparent powerlessness––should give us a clue that thinking, even in shorthand, of The Last Black Man in San Francisco as the “gentrification in San Francisco” movie risks obscuring what is most rich about it. It is a film about the dispossession of Black people in San Francisco and the extinction of the city’s shared life. And it is a film about grief. But its perspective on these issues is decidedly aesthetic, and, in a way most revelatory to me, inured to a cultural discourse obsessed with the idea of performance that usually ignores the idea of theater, theatrical. The film presents theater like Weber does, as a medium that locates––grounding us in a particular place and time––and dislocates, revealing the otherness of our world.

The house at Golden Gate and Fillmore where Jimmie’s family lived for a period of his childhood that as an adult he obsessively cares for, his pursuit of which drives the narrative, is this kind of theater, even before it literally becomes one in the film’s last act. In a technological world that feels both blank and boundless, theater separates, revises. Forgetting this theatrical potential, we abandon our shared spaces to a vision of neutrality that only means money. Remembering it, we take back our imaginative power to be different.

Theater is everywhere in The Last Black Man of San Francisco, if you know how to look for it, like Jimmie and Mont do; the title even sounds to me like a nod to Suzan-Lori Parks’s play The Death of the Last Black Man in the Whole Entire World, and at a few points I heard echoes of famous lines from Death of a Salesman. But let’s start with the most obvious. Mont, Jimmie’s gentle, quizzical foil, is a playwright. As his grandfather (Danny Glover) comments, he’s been writing plays for a long time; his bedroom is decorated with playbills. (The most visible one is Ain’t Misbehavin’, the Fats Waller musical from 1978 that apparently had a short run in San Francisco in 2017, and words can’t express how moving I find this character detail––Mont loves theater so much he pinned up the playbill from a minor revival of an old chestnut revue––although it also seems important that the musical is a period piece from one flowering age of Black culture about another.) More crucially, Mont sees his world as theater. He sketches a view of his neighborhood framed by an ornate red theater curtain, and he writes his plays directly from his experience, transforming, for instance, the monologue of the preacher into a dialogue with the hazmat-suited men. We watch Mont rehearse both roles, moving back and forth on the improvised stage of the dock. Later, in his room, he rehearses the performances of the men who hang out in front of his house––and comment like the chorus in Greek tragedy––rewriting their hostility into gentleness.

The film follows Mont’s lead, installing theatrical scenes variously as unwelcome intrusions (when the current owners of Jimmie’s dream house appear as a displeased audience throwing produce at Jimmie as he paints their windowsill, or when Jimmie, waiting at a bus stop, becomes an unwitting performer for a drunken party bus) and aesthetic interventions, as in the musical street performances that score multiple sequences. In a high point of emotional tension, the conceptual separation of theatrical space becomes Mont’s direct action, as he interrupts an escalating fight between the men on the block. He intervenes as a director calling off the rehearsal of a scene. “Very good. Very good,” he assures them breathlessly, getting in between Nitty (Antoine Redus) and the vulnerable Kofi (Jamal Trulove). “The great news is...you’re all doing marvelous work. Congratulations. It’s not easy. I believe you,” he implores, “But I know it can be deeper. Hey––remember Stanislavski. Grotowski. Boleslavsky. Chekhov. Brecht. These are the greats.” The men mutter, but the fight stops. “Keep building it!” he instructs as he leaves, having inserted theatrical distance in a drama that felt fated and inevitable, and transformed it.

The citation of these names is so odd and singular that I turned on the subtitles to make sure I wasn’t mishearing (the sound mix is too low for me to be sure about about Boleslavsky, but the others are clear) and found that the transcription missed Brecht completely (it’s written as “bruh”––no comment). How to read the inclusion of these European modernists and this evocation of a very particular dramatic tradition––writers you might read in the first year of theater school, if that school was not particularly forward-thinking? Is Mont an anachronistic playwright––with his tweed jackets and loafers, he does look like he walked out of the early ’60s––or is theater in this film the anachronism, a way of interacting with the city and its spaces that is fundamentally out of joint with the present? A present that’s expelled theater and its shared, set-apart happenings, violently installing a uniform neutrality to the city, the better to chop it up and sell it?

This brings us to the house. For Jimmie, it represents a fantasized subjectivity, the site of wholeness, continuity, stability, and remove (over and over, we see him on the balcony surveying the city below). Mont’s vision of it is different. The montage in which he builds a stage, designs and sews costumes, rehearses dialogue, and promotes his play, “The Last Black Man in San Francisco,” inviting all the characters of the film to be the audience––interspersed with Jimmie’s painting and restoration of the house itself––sets up Mont’s theater as the supplement and counter to Jimmie’s. But the theatrical event that takes place there is curious. A red curtain opens, and Mont is on stage alone, playing both sides of an escalating argument that culminates in Kofi’s death. He then confronts the audience with their own social media responses on a projected screen. They are tense, listening. As the camera tracks out, we see that Mont is on a milk crate. The preacher from the opening scene, now an audience member, nods appreciatively, as a trio of singers, street musicians from earlier in the film, score his speech. “Kofi had dimensions,” Mont thunders. “More than a post could reflect or a play could capture. So I summon you. Celebrate the life he lived.” He speaks to the audience: “Ma’am? How will you remember Kofi?”

Majors’s performance is completely without cynicism––but the monologue is also distancing, uneven, strange, and confusing. And it doesn’t work the way it’s supposed to. After Mont cajoles the audience to “break the boxes” the world put Kofi in and “give each other the courage to see,” he tries to confront Jimmie in the action of Aristotelian drama, the recognition of a hidden truth: “Let us all really look at Jimmie Fails the Fourth...You exist beyond these walls, you extend beyond your forefathers! You’re not this house! You are not these walls! You’re not these floors, this ceiling...your grandpa didn’t build this house!” But the reversal meant to follow never arrives. The drama collapses. Jimmie and the audience simply walk away.

This failed drama undercuts what we expect to be the film’s climax, and what it would be, were the film invested in that kind of dramatic structure. In fact the film argues for a different kind of theater. Mont’s play succeeds not when he tries to expose a truth or force a reckoning, but when his presentation is most confounding, when his audience is most unsure of themselves, most open to difference. In the end, Jimmie can’t lay claim to the house as he wants to, can’t stabilize and contain his feelings about his family and himself. But the greater loss is that the city has no place for Mont’s theater, no shared spaces in which we might be other to ourselves.

The end of the film returns to the image of Jimmie and Mont watching a movie on television with Grandpa Allen, who is blind. Mont describes the film for his grandfather in a whisper. I would locate this scene in the long tradition of rewritings of Plato’s parable of the cave (in which prisoners watch shadows made by puppets on the wall of a cave and imagine them to be real), often used as an allegory for the disempowered spectator. Instead, Mont’s intimate oral mediation of the screen image models an active spectatorship and challenges what it means to “really look” and “see.” There is no direct apprehension here, no total understanding. What we are invited to see in this movie theater is the relatedness and contingency of our view; what we are invited to appreciate is the emotional content of the mediation.

Julia Jarcho, writing about the theater company Elevator Repair Service’s Gatz, a word-for-word adaptation of The Great Gatsby, describes its fidelity to the text as utopian, holding out the impossible dream that we could ever be truly faithful to what we love. Mont’s fidelity––to Jimmie, to Kofi, to his grandfather, to theater––realized not in drama but in the quieter media of his affection, is this utopianism, the imaginative leap out of the world as it is. I hope Mont keeps writing plays.

Shonni Enelow is Associate Professor of English at Fordham University. Her book, Method Acting and Its Discontents: On American Psycho-Drama, published by Northwestern University Press, won the George Jean Nathan Award for Dramatic Criticism. Her latest book, A Discourse on Method, cowritten by David Levine, is now out from 53rd State Press.