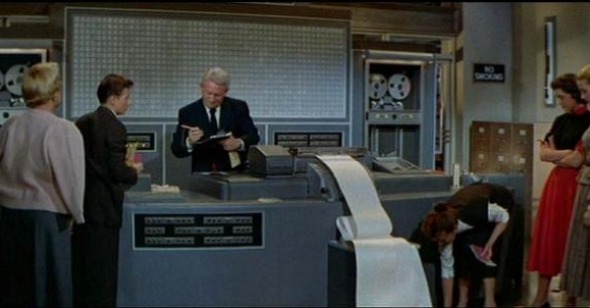 Staying In is a series that focuses on films our writers have viewed at home through all forms of digital distribution, from cable on demand to downloads to instant streaming. With Staying In, we hope to expand our ideas on film watching and criticism by getting out of our comfort zone—the theater.

Of Love and Data-Processing
By Eric Hynes

All films, post-theatrical and likely also during theatrical, will soon be available for streaming to computers and home viewing devices. But for the time being, offerings through Netflix Instant, the most popular resource for live streaming movies, remain limited. Perhaps my habits are atypical, but its relatively meager selection doesn’t preclude me from almost always choosing from among the instant options rather than popping in a DVD. I’ve adapted quickly to the new viewing model, but that’s only because it satisfies a considerably older instinct: laziness.

Looking back on the past decade of DVD viewing, it’s remarkable how Netflix conquered the market with such an imperfect model. Yes, the selection is peerless. And yes, there are no dreaded late fees. But must I select films days and weeks, if not months or years ahead of time rather than choose something that suits my mood today? What we save in late fees we more than match by paying $16 month after month so that Scenes from a Marriage can sit red-sheathed on the shelf, indentured until an elusive block of time will open up, or until guilt finally gives way to giving up. Until Netflix Instant, I often shirked the obligation of watching whatever had arrived from my “queue”—a dutiful word if ever there was one—in favor of the unfettered unpredictability of basic cable. Raised on remote control and video stores, I prefer to stroll around a bit before settling on something. On cable, TCM usually draws me in, while in video stores I often parked myself in front of the ghettoed “foreign” and “independent” racks. With streaming video, I can again encounter films the way TV and retail stores had taught me to: personally, impulsively, and within limitations.

The same spirit will guide this column. From the available offerings, I’m choosing a film that somehow seems relevant to the moment. Also, it’s a film I probably wouldn’t otherwise add to my Netflix queue, yet one I’m compelled to watch. With The Social Network set to face off against The King’s Speech at this weekend’s Academy Awards, I fished for something that spoke to the zeitgeist of an earlier era, and specifically that earlier era’s technologically-tinged zeitgeist. I looked for the likes of War Games and The Net, but they’re not streamable, and I can’t be bothered to re-rank my queue, send back that Sokurov documentary I’ve been sitting on for six months, and wait four days for Sneakers to arrive. So how about a very early computer-age romantic comedy, starring Katharine Hepburn and Spencer Tracy, called Desk Set? It’s hardly obscure, but I’d never seen it. Click, boom, presto. Instantly, it begins.

At the end of the opening credits, which are niftily inked out on computer paper, is a conspicuous thank you: “We gratefully acknowledge the cooperation and assistance of the International Business Machines Corporation.” Even if Facebook and Mark Zuckerberg had been consulted for The Social Network, such a hat-tip would be unthinkable within the opening credits of a contemporary film. But it would be inaccurate to say that Desk Set is an advert for IBM, though such early pop culture product placement certainly helped equate the company with computers (like Hoover, Xerox, and Kleenex before it) for decades to come. Technology is more derided and feared than promoted in Desk Set.

Tracy plays Richard Sumner, an engineer from MIT who’s hired by the head of the fictional Federal Broadcasting Company to give the station a technological upgrade. Hepburn plays Bunny Watson, the head of a research department built on brains and hustle. Richard hangs around, identifying ways to make the department more efficient and measuring out floor space for the arrival of his beloved computer, “Emily” EMIRAC. Almost immediately, if quietly, he also falls for Bunny, and gradually erodes her already tenuous connection to Gig Young’s career-climbing Mike Cutler. Written by Phoebe and Henry Ephron (Nora’s parents), Desk Set’s urbane, hard-volleying dialogue is representative of what Aaron Sorkin’s been trying to evoke throughout his career. Roots of The Social Network’s opening pitter-patter can be found in Desk Set’s rooftop lunch date, in which Hepburn and Tracy size each other up over sandwiches and surrounded by pigeons, words firing freely and eyes darting curiously. “I associate many things with many things,” she says, multiplying meanings, before he concedes a nerd’s high compliment: “You are a very rare tropical fish.”

Besides Hepburn, who’s a damned hoot as a casual genius in smart suits and a scarlet grin who machine-guns dialogue and downs pre-lunch champagne to Cole Porter, and busty Joan Blondell who supplies a vital blast of brass, the reason to seek out Desk Set is to marvel at Paul S. Fox and Walter M. Scott’s set direction. Situated high above Rockefeller Center, the offices of FBC pit clean, wood and leather mid-century modern decor against eclectic thirties-era industrial steel, with neither aesthetic, much like the corresponding cultures and employees, meant to seem inferior in the end. The gorgeously detailed sets go a long way toward establishing a tone of office integration, rather than reinvention or upheaval. Polished wood credenzas aren’t symbols of evil modernity, and neither are floor globes a sign of backwardness. Though technology encroaches on physical space, there’s still room at the office for characters like Bunny, whose plant snakes along the ceiling of her charmingly untidy office, which is contrasted by a well-maintained plot of green in the company’s lobby. The same idea applies to both spaces—they’re just approached differently. By the end of the film, when the bulky, alighted EMIRAC is parked inside the dark, library-like research department, one style is literally grafted onto the other. The union is made complete by the narrative, with the researchers assuming they’re done for but in the end making nice with the bleeping and blurping Emily. They input info painstakingly, Emily outputs it instantly, which they in turn interpret and communicate. Voila, Wikipedia is born.

Like The Social Network, a lusciously made film about young men who look at monitors all day, Desk Set doesn’t work too hard to transcend its milieu. It utilizes Cinemascope to make a living environment out of a workplace, rather than self-consciously manufacture cinematic exteriors. The films are both self-consciously of their moment, but also timeless in their concerns. While The Social Network finds classic insecurities at the heart of Zuckerberg’s ambition, the Desk Set is a comedy about people trying to adjust to a rapidly changing environment, about contemplations of obsolescence and reassertions of humanity, about conflicts that have basically defined the past century of Western living. Last week, 54 years after the release of Desk Set, an IBM computer named Watson (son of Bunny?) defeated two living champions on the game show Jeopardy. At first it seemed like a step forward for technology and a step backward for humanity (and the best press the International Business Machines Corporation has had in a very long time). But in light of Desk Set, the more things progress, the more fears and hubris stay the same.