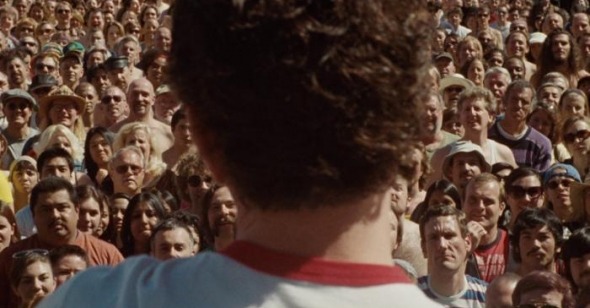 A Hero for Our Time
by Chris Wisniewski

‚ÄúPolitics is theater,‚ÄĚ observes Harvey (Sean Penn) in Gus Van Sant‚Äės terrific Milk. And sometimes, of course, theater‚ÄĒor cinema‚ÄĒis politics. When they first embarked on this project, Van Sant and screenwriter Dustin Lance Black could never have anticipated that 2008 would see the election of a minority candidate and former community organizer, running on a message of hope, to the highest office in the land, nor could they have expected that Obama‚Äôs historic victory would coincide with the passage of Proposition 8 in California, delivering a major setback for the gay rights movement in the United States. But this is Milk‚Äės political moment, and the improbable confluence of events surrounding its release will undoubtedly define the film‚Äôs reception.

Some are likely to view Van Sant‚Äôs movie as a crushing rejoinder to Prop 8, others as an Obama allegory, and then there will be those who see it simply as a flawed but expertly assembled biopic. Each viewer‚Äôs reaction to Milk will likely depend on his or her political orientation and investment in its subject; when a film speaks so directly to its culture and its moment‚ÄĒeven if its timeliness is coincidental‚ÄĒhow could it be otherwise?

There is a tendency in film criticism to assume a position of faux objectivity‚ÄĒto pretend that we have set aside the details of our personal lives and our idiosyncrasies in the service of a fair, unbiased assessment. And though critics should try to write for as many audiences as possible, we should always remember that we still speak as an audience of one. In the case of a movie like Milk, which so directly addresses us socially and politically, abstracting from our own highly individual reactions misses the point.

As a politically engaged gay man, I am the beneficiary of Harvey Milk‚Äės activism, and I have a clear personal stake in the commercial and critical reception of mainstream queer films like Milk. So with no small bias, and a corresponding sense of urgency and advocacy, I implore you to see Milk‚ÄĒnot because it‚Äôs a perfect film or even a great one, but because it is inspiring and deeply moving, beautiful and sad, searingly personal and boldly political.

Unlike Brokeback Mountain, which achieved crossover success by sidestepping identity politics and foregrounding tragic romance, Milk makes its social and political intervention explicit as early as its opening credit sequence, which features archival footage of police raids of gay bars and clubs intercut with historic newspaper clippings. Van Sant incorporates stock footage throughout the film, and with the great cinematographer Harris Savides (who also shot Van Sant‚Äôs Bela Tarr inspired ‚ÄúDeath Trilogy‚ÄĚ) he‚Äôs given much of the movie‚Äôs 35mm material a 16mm grain. Without explicitly aping a documentary aesthetic, Van Sant deftly transitions between historical footage and fictionalized re-enactment, much of it shot on location. From the fro-style hairdos to the Castro Theater to Anita Bryant on the television, Milk lovingly and respectfully reconstructs a time and place.

While locating Harvey Milk quite precisely in his era and milieu, Van Sant and Black manage to tease out the elements of his story that are most universal and ever relevant‚ÄĒthe capacity some leaders have to mobilize bottom-up social advocacy through hope, and the triumphs and tragedies that often result from the movements they help to create.

Breaking from Van Sant‚Äôs recent dalliances with experimental art cinema, Milk has the basic structure of a conventional biopic. It begins in 1978, with Harvey recording a tape about his life, to be played in the event of his assassination. The tape becomes a framing device for a narrative that tracks Harvey from his fortieth birthday in 1970 New York City, where he meets his long-term lover Scott Smith (James Franco), through his election to the San Francisco Board of Supervisors and subsequent assassination by fellow Supervisor Dan White (Josh Brolin). Van Sant has always been more of a visual artist and consummate craftsperson than a deep or original thinker, and here he benefits from the screenplay‚Äôs sturdy structure while still bringing a captivating visual flourish to the material, particularly in a few early, intimate scenes between Franco and Penn.

Milk is sometimes hobbled by its tendencies toward the generic‚ÄĒa framing device that is never contextualized in the narrative, a third-act, quite literal stab at the operatic‚ÄĒand it stumbles badly with its graceless depiction of Harvey‚Äôs lover Jake Lira (Diego Luna), who‚Äôs made to look rather ridiculous as he goes from crazy to crazier. But Penn‚Äôs extraordinary performance makes it easy to look past these flaws. His Harvey is an unexpected mix of playful warmth, fiery determination, and gentle melancholy. If Milk occasionally feels obvious, the same cannot be said of Penn: He gives the film a heartbreaking human center.