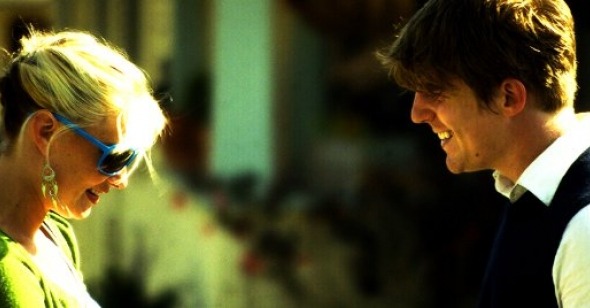 Writer-director-editor-star Evan Glodell‚Äôs debut film Bellflower starts in media res. We‚Äôre treated, within its first thirty seconds, to a fragmented blend of flipped cars, backwards footage, and slow motion. Then, before what we‚Äôve seen folds back into itself, comes to an end, and the film proper starts, there‚Äôs an epigraph: ‚ÄúLord Humungus cannot be defied.‚ÄĚ‚ÄĒLord Humungus. The significance of this quotation makes itself plain soon enough: Bellflower positions The Road Warrior‚Äôs antagonist as the ultimate embodiment of masculinity, an ideal to which best friends Woodrow (Glodell) and Aiden (Tyler Dawson), two Wisconsin natives living in California, desperately aspire even as they know in their heart of hearts that they‚Äôll never match it. This attempt‚ÄĒand subsequent realization of its futility‚ÄĒlasts for the duration of the film. A sort of apocalyptic Bill and Ted, Woodrow and Aiden pass the time blowing things up, building a flamethrower, and modifying cars with add-ons like a whisky dispenser. Exclamations of ‚Äúdude,‚ÄĚ ‚Äúsweet,‚ÄĚ and ‚Äúawesome‚ÄĚ abound in their repartee, often as they work toward making the real world more closely resemble that of their favorite film. But they‚Äôre far from ‚Äútough guys.‚ÄĚ Woodrow and Aiden live in their own bubble, but upon realizing the ever expanding disparity between the world they‚Äôve dreamed up and the one in which they actually live, they know it‚Äôs soon to burst.

Bellflower takes the testosterone-laden violence, fire, and machismo of usually mindless action films and funnels them into a heartfelt vision of fractured romance via Woodrow and his girlfriend, Milly (Jessie Wiseman), a destabilizing force in an already-off-kilter film. Its set pieces seem more at home in the kind of genre flicks Woodrow and Aiden grew up on, but they‚Äôre used by Glodell as the most accurate way of externalizing his characters‚Äô twisted perceptions. Like the vehicles Woodrow and Aiden work on so diligently, the film itself is a sort of mechanized hybrid, a Frankenstein-like fusion of Mad Max iconography and a rise-and-fall chronicle of a love affair between two people in over their heads (not unlike that in Blue Valentine). Clever intertitles and a homemade camera (dubbed the ‚ÄúCoatwolf,‚ÄĚ it was used to shoot two-thirds of the movie) alone would not make a good film, of course, so thankfully there‚Äôs a sincerity to Glodell‚Äôs vision‚ÄĒand this is nowhere more present than in the character he himself portrays. Bellflower 's dark joie de vivre and permeating sense of grief are embodied by Woodrow as he makes himself vulnerable physically, emotionally, and, eventually, neurologically. In addition to a psychological portrait, the film becomes an intensely stylized look at the boredom that can be wrought by suburban living, as well as the ever more dangerous ways this ennui is both manifested and counteracted‚ÄĒnot only fast cars and flamethrowers but also infidelity, domestic violence, and rivalries that end in bloodshed.

The word Bellflower‚ÄĒthe suburban street that plays host to these increasingly destructive acts‚ÄĒis never spoken aloud in the film, but comes to serve as a catchall encapsulation of the love, fun, sex, and trauma contained therein. Bellflower moves from one component to the next with kinetic elegance. Just as droning, bass-laden synth music transitions into country ballads, so too do the characters‚Äô lives move from crest to trough. In practically call-and-response fashion, Glodell balances every joy with a grief, eventually tipping the scale toward the latter. The film‚Äôs attention-grabbing aesthetic‚ÄĒhandheld, semi-shaky cinematography and saturated colors‚ÄĒperfectly matches Bellflower‚Äôs fervent energy, a hyperactivity that doesn‚Äôt quite mask the slowly building tension. Though at first its preoccupation with cars and girls and broken bones makes it seem familiar, the film ultimately whittles itself away into something unrecognizable. The mood forged is increasingly stark and desperate in a way that bears mention: Glodell isn‚Äôt merely pulling a bait-and-switch for the audience but rather showing that the world in which Woodrow now finds himself is a far cry from what he hoped and imagined it might be. At first appearing youthfully na√Įve, Bellflower would, by film's end, be more accurately be described as almost hopelessly disenchanted.

Toward this end, Glodell breaks his central character down to the bone, showing that his surface wounds are mere symbols of the more urgent festering within: Bellflower isn‚Äôt merely interested in flesh and flame‚ÄĒit‚Äôs concerned with the impulses that lead to (but can't control) violence. When, midway through, the nerve endings governing Woodrow's mental calculations are severely frayed, Bellflower grows all the more volatile, provoking not only discomfort but even genuine dread. The alcohol coursing throughout Woodrow, Aiden, and everyone else‚Äôs systems only exacerbates their urges. The dark territory traversed as a result is much less of a joy to watch than the film's sun-kissed beginnings, and the tension wrought by this contrast ultimately makes it clear that the film‚Äôs outwardly appealing set pieces are merely a means of drawing us into the hurt inside rather than self-serving action.

Glodell doesn‚Äôt handle the darker hues quite as deftly, however. Certain scenes meant to mirror Woodrow's inner turbulence are hallucinatory to the point of near-incomprehension, and, perhaps intentionally, Bellflower temporarily loses focus in much the same way as its protagonist does. Woodrow's moments of clarity are rare here, and what few there are come about only as the result of repeated failed attempts at finding some semblance of bliss. He thus emerges as a young man who doesn‚Äôt know what to do with the images burnt into his mind, whether real or injury-induced, and so he eventually retreats back into the Lord Humungus‚Äďinspired reverie that has so fundamentally shaped his worldview rather than accept the world on its own terms. Between a near-lethal breakup and his and Aiden‚Äôs growing realization that their California Dream has devolved into a nightmare, it‚Äôs easy to see why the two young men continue pretending to be alpha males despite being anything but. So tainted is their shared worldview by the violent movies of their youth that they‚Äôre only able to understand real-life heartbreak by placing it in the sole framework they seem capable of fully processing. Bellflower may be disjointed and erratic, but so is the world it depicts.