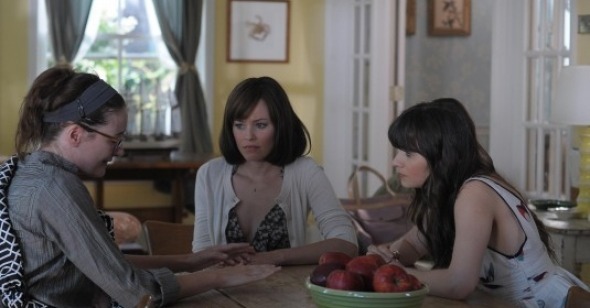 Few can, or want to, deny Paul Rudd’s understated charisma; as someone who has worked in a video store for years, I can attest to having heard nearly every kind of person regardless of age, color, or creed, after several debates about what movie to take home, finally sigh and say, “Well, this one’s got Paul Rudd in it, so it can’t be all bad.” Rudd’s magnetic affability shines through even in the most miserable slogs (I Could Never Be Your Woman). Despite a career peppered with as many off-putting films as minor classics, Rudd merits his reputation of being a loveable everyman actor whose universal appeal makes movie decisions that much easier on a Friday night. It makes sense, then, that Rudd would be cast as Ned, the absurdly trusting, stubbornly naïve titular schmo of Our Idiot Brother, whose unswerving belief in the goodness of human nature allows the audience to fall in love with him, even as it unnerves the rest of the ensemble cast.

When we first meet Ned, he is, naturally, selling organic produce from a co-op farm in upstate New York. Ned’s benevolent smile and gentle gaze peek out from a sea of overgrown beard and flowing locks; he radiates peace and tranquility, as if his heart chakra were glowing a hundred times brighter than everyone else’s. It takes nothing more than a policeman’s complaint of a rough week to goad Ned into offering him a little weed (on the house) to help him relax. The cop insists on paying, though, and immediately places Ned under arrest once he wheedles him long enough to get him to accept a measly twomper for the huge bag of luscious organic buds.

Flash-forward to Ned’s release from jail and reunion with girlfriend, Janet (Kathryn Hahn), who, months ago, worked the fat of the land with him on the farm, but has since found someone else to plough her fields. True to his hippie-go-lucky character, Ned immediately adapts to the situation and befriends Janet’s new boyfriend, who gives him a ride to the train station once she hostilely shoos him off her property. Ned’ll be fine, though, as he appears to be capable of going with the flow under any circumstances; like Sinéad O’Connor, he does not want what he hasn’t got, other than custody of his dog, Willie Nelson, whom Janet claims was left on their farm by her friend, and is therefore technically hers.

And so a homeless and dogless Ned is set for Candide-esque adventures in the harsh realities of New York City, where he goes to surf the couches of his three sisters. While getting Willie Nelson back is Ned’s simple quest throughout the film, his family members are plagued by worldly desires and constantly striving to better their situations in all the most futile ways. Ned’s sisters, Liz (Emily Mortimer), Miranda (Elizabeth Banks), and Natalie (Zooey Deschanel), are like the wicked stepsisters from a fairy tale; the conniving and self-deluded counterparts to Ned’s truth-seeking simpleton, these women are obsessed with fitting into society, augmenting their status, looking sexy, and gaining approval. And, as with any good morality tale, it turns out they are, in fact, more inept at life than Ned is, they just hide it better.

Liz is the first to receive Ned, who shows up on her doorstep in an oversized tank and baggy pants with all the easygoing swagger of Jeffrey “The Dude” Lebowski. Like Being There’s Chance (who gets what may be a nod in Ned’s eagerness to share YouTube clips of Peter Sellers with his nephew), Ned touches lives in special ways. For better or worse, thanks to his honest face and seeming incapacity for maliciousness, he is able to draw people’s secrets out into the open, whether those secrets are confided in him, or accidentally discovered thanks to his guilelessness. When he discovers that Dylan is cheating on Liz, he doesn’t even tell Liz for fear of having misinterpreted what he saw (two naked people in a dark room). He does, however, mention it to his other sisters, who confront Liz in a scene that shockingly reveals their extreme shallowness and cattiness, wherein they accuse Liz of having let herself go, thereby driving away her husband. Having fouled things up at Liz’s, Ned moves on to Miranda (Banks in a brown wig that transforms her into a carbon copy of Parker Posey). This career-driven journalist is willing to go to any lengths to get a good scoop, even if it means breaching her subject’s trust and using information that was confided off-the-record to her brother. They get into a flap that leaves Ned no choice but to retreat to the dwelling of whimsical Natalie (Zooey Deschanel), the commitment-phobe wannabe artist in a stable lesbian relationship with strong, dominant Cindy (Rashida Jones, whose wardrobe of silly signifiers—big glasses, shapeless suit—is as over the top as Ned’s), but still sleeping with boys on the side.

Granted, these portraits are somewhat grotesque female caricatures, but Our Idiot Brother is closer to a fable than a sloppy man-boy Apatow comedy, and fables use stereotypes to illustrate their points. If Ned is allowed to be a hyperbolically ingenuous hippie elf, then his sisters might as well be shrewish avatars of American womanhood wrapped up in materialism, low self-image, and sexual confusion. It is interesting when, during Cindy’s pep talk to Ned, trying to hype him up enough to go and get his dog back, she asks “Who’s the man?” to which he responds, “You are!” Though the women here are portrayed as having their priorities all mixed up, they are not wholly demonized, and Ned, himself, while appearing beatific, is hardly idealized. He’s a pushover and a schlub perpetually at the mercy of other people’s decisions because he has no real control over his own life.

Our Idiot Brother presents us with a world in which life is out of balance; to put it in New Age-y terms that Ned might use, many of the female characters embrace too much yang, or masculine energy, and Ned has too much yin, or female energy. In its way, it deals with gender and sexuality in way akin to last year’s The Kids Are All Right (a film which it distinctly resembles in tone). In fact, my only real problem with Our Idiot Brother is that, after ending on a beautiful note, the film abruptly cuts to a blooper reel, ruining the mood. The only other time I’ve seen such a baffling concluding editing choice? Being There. One wonders if the homage was intentional.