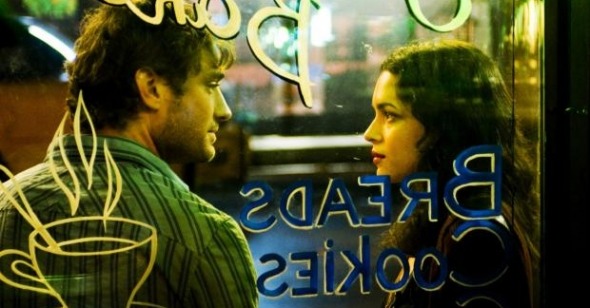 Another Piece of the Pie
By Sarah Silver

My Blueberry Nights, Wong Kar-wai’s English-language debut, opens with a series of exterior shots of New York City, accompanied by swanky upright bass and the smooth adult-contemporary voice of Norah Jones. “I don’t know how to begin, ’cause the story has been told before,” she coos, as Wong cuts to extreme close-ups of blueberries and crumbling crust inundated with thick cream. Jones’s words are true: the stories in My Blueberry Nights have been told before, variations on them popping up in nearly every Wong Kar-wai film to date.

Another loose, largely improvised story about people falling in and out of love while dealing with rejection and perpetual states of longing, Blueberry is unmistakably Wong. This time around, the director’s finely honed taste for a charming face has led him to cast Norah Jones as Lizzie, the movie’s central character, around whom all others orbit. It's not the first time he's taken his chances on a chanteuse to carry a large role: Faye Wong, utterly irresistible in Chungking Express and 2046, remains better known today as a pop artist than as an actor in Hong Kong.

Wong was so taken with Jones that his main reason for setting a film in the U.S., he has stated, is that Jones lives here, and told the New York Times that the film is partly about her face reacting to different environments. Indeed, there is no shortage of shots of Jones thinking, pondering, being generally pensive, and even sometimes reflecting. Of course, this is nothing new, as Wong has proven himself time and again a master of externalizing the internal, employing a range of devices to create private moments of understanding between actor and audience. Yet somehow, in Blueberry, these moments seem contrived, rather than painterly and expert, as they do when it’s Faye Wong, Tony Leung, or another Wong regular, Maggie Cheung, in front of the camera (also of note: master cinematographer Christopher Doyle is replaced here by a proficient imitation, Darius Khondji, behind the camera).

We share many of these meditations with Jeremy (Jude Law), a lovelorn British barista who serves up comfort food and gentle observations to his regulars at a café somewhere in or around SoHo. Like Chungking Express’s Cop 223 (the delectable Takeshi Kaneshiro), who explains his vow to eat thirty cans of expired pineapple before finally letting go of the hope that his ex will come back to him, Jeremy has a food superstition: although there is always a whole, untouched blueberry pie left at the end of each day, he continues making them in case, one day, someone wants a slice. Admittedly, both hopeless romantics’ proclamations are like lines torn from the pages of a bestselling book of quirky short stories. Why, then, does the delivery of Jeremy’s monologue come off as disingenuous, whereas Kaneshiro’s voiceover, in a language I cannot speak, feels poignant and poetic?

Blueberry’s Jeremy picks up where Tony Leung’s character leaves off in Chungking Express: slinging hash at a local restaurant and dreaming of the one that got away. One of Wong’s most elegant, almost spiritual, themes is the tendency of humans to blend with others. By the end of Chungking, daydreaming waitress Faye has adopted the wardrobe and career of the former girlfriend of a man she thought she could love. Meanwhile, that man (Leung) has inherited the fast food stand where Faye presided during the course of their flirtation. He, like many of Wong’s characters, effortlessly crawls into the skin shed by someone who could have, or should have, been a major presence in his life, but managed only to amount to a near-miss at love.

One might even compare Wong Kar-wai’s entire filmography to Hal Hartley’s experimental indie Flirt. A film comprised of the same short story told three times over—once as a heterosexual story of love and betrayal set in New York, next as a homosexual version of the same story set in Berlin, and finally as a Japanese Noh Theater troop’s interpretation of the same story set in Tokyo—Flirt calls attention to itself as a film about the universality of film, and of storytelling in general. In Wong’s universe, this system of reincarnation isn’t self-contained, but rather continues from one movie to the next as characters persist in working out their karmas, regardless of whether they’re portrayed by the same actor. In Blueberry, when the very recognizable In the Mood for Love theme, arranged for solo harmonica, begins to play over a slow motion scene of chaste intimacy between Lizzie and Jeremy, we are reminded again, both visually and aurally, of Wong’s intention to tie these Americans and Brits to his established stable of characters.

Jeremy falls for Lizzie, but the timing is off, as she has just ended a relationship and is itching for a road trip. She decides to leave New York, and Jeremy. But in order to keep him close to her, she takes up his profession, making the transition from one who is served to one who serves, and going from crying her eyes out nightly on Jeremy’s indefatigable shoulder, to staring doe-eyed as she listens to the problems of drunks, floozies, and compulsive gamblers. Lizzie becomes a waitress first in Memphis, where she meets Arnie, an alcoholic cop (David Strathairn, cast, according to Wong, because “his profile looks like Gary Cooper”), and his estranged wife Sue Lynn (Rachel Weisz), whose name, when pronounced in the film, sounds Chinese enough to make one wonder if, Chabrol-style, she doesn’t share a moniker with one of Wong’s past creations. These two act out a Tennessee Williams¬¬–inspired sexual power struggle, with tragic results, but it is difficult to feel very deeply for them, since they remain peripheral figures encountered by Lizzie on her journey of self-discovery. Though they both make efforts to reach out to her, Lizzie keeps her professional distance, as their server/listener, and seems interested in them only as archetypal Southerners, people she might sketch out in her journal for later use if she ever attempts a novella.

Lizzie becomes a bit more deeply involved with a woman at her next pit stop, played with gusto by Natalie Portman. Splashing around in a Southern accent and bleached hair as Leslie, a believable combination of naïve Thelma and savvy Louise, Portman gives her most inspired performance since her similarly blowsy one in Closer, and brings a jolt to Blueberry’s latter half.

Fearful that this review would sound as though it were written by one of those Americans who distrust American works and believe that foreignness connotes intelligence, I had to be frank and ask myself if my disappointment in Blueberry wasn’t partly due to my own cultural reverse prejudice. With all the signature Wong Kar-wai shots in place and the usual themes present, what makes Blueberry a less edgy and emotionally accurate film than Chungking Express, Happy Together, or In the Mood for Love? Is my perceived exoticism part and parcel of what I, as an American viewer, consider to be the Wong Kar-wai experience? Doubtlessly it is, but the discrepancy here isn’t entirely a matter of the film’s locale or the ethnicity of its cast members; after all, I find New York exotic and Blueberry’s cast beautiful. What seems to have occurred, for whatever inexplicable reason, is simply that Wong has made a slightly less vibrant, but nevertheless very fine, movie that relates to his previous work in interesting ways, even if it’s destined to be referred to as “minor Wong.”

Part of the genius of Wong Kar-wai’s filmography is that, when watched in different orders, his films function a bit like a “Choose Your Own Adventure” book. He seems to leave the endings open on purpose, like someone reluctant to close a door, so that, at any given time in his career, he can pick those threads back up and start another chapter. Thus, he has created an intricate society living in a complex network of films. Perhaps one day, five or six films down the line, viewers will be at liberty to shuffle My Blueberry Nights in between a screening of two films yet to come, and, when juxtaposed thusly, new colors and meanings will become apparent. For now, however, I am content to call it a tasty little morsel, and it never hurts anyone to indulge once in a while.