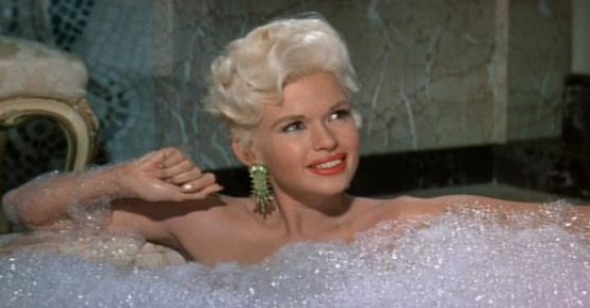 At last year‚Äôs Academy Awards, Jake Gyllenhaal presented one of the more inane Oscar montages in recent memory, a tribute to epics and spectacles so large that ‚Äúyou can‚Äôt properly watch [them] on a television set.‚Äù Brilliant: Let‚Äôs salute films you can‚Äôt properly watch on a television set with a montage of clips being watched by over one billion people worldwide on‚Ä¶their televisions. I make the point not to poke fun at the Oscars (that horse died long ago) but to describe what it‚Äôs like for those of us who feel somehow defeated when we watch films that really require a theatrical screening‚Äîand they need not be epics‚Äîon a television set. Frank Tashlin‚Äôs classic 1957 comedy, Will Success Spoil Rock Hunter?, which gets a long overdue theatrical run at New York‚Äôs Film Forum this week, is a perfect case-in-point: Tashlin‚Äôs film is preoccupied, visually and narratively, with the corrosive effects of television, not simply as a medium but also as an aesthetic, on American culture. It‚Äôs cruelly ironic that, for years, it‚Äôs only been available in a panned-and-scanned VHS version, and forget the recent DVD release: this is a film so resentful of the confines of the television screen that to watch it anywhere other than a movie theater is to miss the point entirely.

By the time Will Success Spoil Rock Hunter?was released in 1957, Hollywood was in sorry shape; changing demographics, major court decisions, and the rise of television delivered the industry a series of compounding defeats that shook it to its core. The anxiety was palpable, and desperate movie studios tried everything they could to make the movies feel special again (and we can all thank them for the resulting innovations in widescreen and color filmmaking). Rock Hunter literalizes that anxiety with absolute, cartoonish delirium (fittingly‚Äîthis being, after all, a Tashlin film). It‚Äôs a movie that is both small and big: an unassuming, sharp-but-modest satire of the television advertising world, it‚Äôs also a spectacular widescreen meta-text, a kind of pomo deconstruction of American bourgeois complacency too expansive to sit comfortably even within its cinemascope frame.

Tony Randall plays Rock Hunter, an ad writer desperate to save his job‚Äîand his company‚Äîby devising a genius new campaign for Stay-Put Lipstick. When blonde bombshell Rita Marlowe (Jayne Mansfield) ditches Los Angeles and her faltering love affair with Bobo Branigansky (played by Mansfield‚Äôs future husband Mickey Hargitay) for seclusion in New York City, Rock has his idea: get Marlowe, who is famous for her ‚Äúoh-so-kissable lips,‚Äù to endorse Stay-Put. Rock finds her hotel room, and conspires, in tit-for-tat fashion, to get Marlowe to endorse the lipstick. In exchange, he agrees to play the role of her would-be suitor to the world in order to make Bobo jealous. Rock is swept up in a wave of publicity, and suddenly, Marlowe‚Äôs ‚ÄúLover Doll‚Äù finds himself rapidly ascending the corporate ladder while gracing the cover of every major newspaper around the world.

Rock Hunter‚Äôs Sunset Boulevard-meets-Madison Avenue culture-clash sensibility seems to serve a rather narrow purpose at first. Over the opening credits, Tashlin parodies television advertising with a series of commercials-gone-awry. Later in the film, in one of the more obvious gags, Randall takes a break from playing Rock Hunter to mock the 4:3, then-black-and-white aesthetic of broadcast television. Rock Hunter clearly sees television culture as facile and superficial, and Tashlin is unabashedly unafraid to abandon codes of naturalism to make his point. Rock Hunter isn‚Äôt just an anti-television screed, though. Mansfield‚Äôs Marlowe, after all, is an amalgam of Rita Hayworth, Jean Harlowe, and Marilyn Monroe‚Äînot to mention Mansfield herself (in a series of running gags, Marlowe‚Äôs other films share titles and casts with the real-life Mansfield vehicles The Girl Can‚Äôt Help It and Kiss Them for Me). If Tashlin‚Äôs film seems to prefer the substance of the motion picture to the emptiness of television, he‚Äôs perfectly content to lampoon movie stardom while slyly packing his film with a never-ending series of movie-star in-jokes.

But it‚Äôs the film‚Äôs delirious sense of anxiety, born out of the confluence of faltering masculinity and powerful female sexuality, that propels its farce forward, and perhaps that‚Äôs why Rock Hunter is so interesting to watch today. While some of the satire feels dated (it‚Äôs too pointedly timely to be otherwise), there‚Äôs also a potent and prescient subtext about the futility of work and the elusiveness of happiness in a world of social prosperity, national wealth, and, yes, postindustrial capitalism. Fifty years after its release, Rock Hunter seems to anticipate a familiar angst, one that‚Äôs become increasingly familiar in millennial and postmillennial American pop culture. It‚Äôs as though Rock Hunter were the sophisticated, world-weary older cousin of Fight Club or American Beauty. Like those films, it‚Äôs ultimately concerned with nothing less than the specter of masculine impotence‚Äîthe fear that the American male has succumbed to the overwhelming force of consumer culture‚Äîbut while those more contemporary films respond to that threat with a shrill, adolescent howl, Tashlin‚Äôs nifty little farce, in all its grace and wisdom, just gives a wink and a shrug.