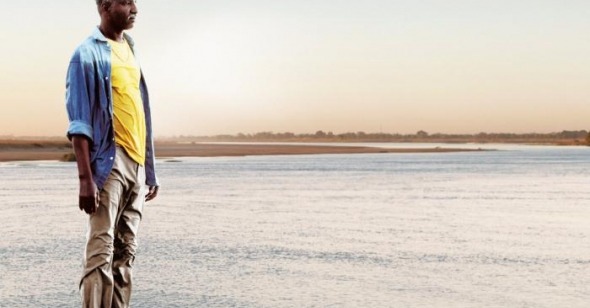 Holding His Breath
by Farihah Zaman

African cinema is generally woefully overlooked by the West, and the filmmaking being done in Republic of Chad has been particularly invisible. The oversight is not entirely unreasonable; decades of civil war have left the local film industry all but nonexistent—for thirty years there was not even a single movie theater in the entire country. That changed in 2010 when Mahamet-Saleh Haroun won the Cannes Jury Prize for A Screaming Man. His film, the first from his country to screen in competition at the prestigious French festival, now has another distinction, having convinced a government in the midst of war the importance of investing a million dollars in building a movie theater specifically so that it could be shown.

The film follows the decline of Adam (Youssouf Djaoro), a former swimming champion whose whole life revolves around the upscale hotel swimming pool where he has been working as an attendant (the first in Chad’s history) for over thirty years. When new management demotes him to a guard position and hands his old job over to his twenty-year-old son, Abdel (Diouc Koma), he is upset and humiliated. Outside of work, a community leader exerts intense pressure on him to contribute to the government’s ongoing war effort against rebel forces. Practically penniless, the only thing he has to offer is his son. Adam secretly drafts Abdel into the army, securing his precious job and temporary relief from the government’s hounding, but as time goes on the realization of what he has done to his family throws him into crisis. As neighbors all around him begin to flee the country, Adam confronts the reality of war and the consequences of his actions.

As this synopsis suggests, A Screaming Man portrays the realities of living in war-ravaged, economically depressed Chad but is as deeply concerned with unpacking masculine identity crises. Both father and son are bound by societal expectations and work to fulfill the traditional responsibilities that make them men. Adam’s job defines him and, in his mind, secures him a respected place in his family and community. Abdel is trapped between the desire to succeed and make a name for himself and his filial loyalty; he knows Adam suffers after his change in station. Haroun seems particularly interested in male stoicism; Adam and Abdel’s struggles are never spoken of because to express their pain aloud would be a sign of weakness. After Adam begins working as a security guard, he and Abdel sit in visibly tense silence over dinner while Adam’s wife, never told of the work situation and completely bewildered by their odd behavior, berates them for not speaking to one another.

Haroun’s restrained storytelling approach mimics the silence of his male characters, showing rather than telling, narrowing the scope and pacing of the film so that it is limited to the world immediately around Adam. Most of the film consists of simple moments in Adam’s beloved daily routine—tending the pool with obvious pride, smoking a cigarette with a friend, eating dinner with his wife—so that his shifting emotions only become discernible in the smallest of details. Adam’s feelings of disgrace and confusion regarding his demotion are captured in a near-farcical moment in which he must run back and forth between the entry and exit gates of the hotel, opening and closing them, trying in vain to keep up with the onrush of traffic. Comic and sad, the scene’s Tati-esque timing and choreography makes it clear that Adam on dry land is truly a fish out of water.

Haroun masters the trick of telling his protagonist’s tale from within and without—we observe Adam externally, in lingering close-ups and long shots, yet also see the encroaching war from his limited point of view alone. As rebel soldiers advance into the capitol, the conflict somehow feels more muted, less immediate. Throughout, the narrative progresses obliquely; frequently, an event of some significance is left offscreen, such as the jump from Adam and his wife meeting their son’s girlfriend to her suddenly living with them, fully integrated into their lives. Haroun employs subtle signifiers to indicate the intrusion of the external world into Adam’s little island—watch how the clientele at the pool changes over the course of film: at first business is thriving and it is filled with diverse patrons; later, there is only a handful of middle-aged white men who we realize, only because of a subsequent shot of their blue helmets, are U.N. peacekeeping troops. The last time we visit the pool, there is no one at all. Adam sees the pool as a safe, contained space, and yet it becomes a mirror to the outside world he attempts to ignore, a measure of the severity of the war.

Adam does not scream at humiliation, at war, or at grief. He gives the titular shout only once, in the film’s opening, a brief moment of strength and triumph as he breaks up through the surface of the hotel pool, followed shortly by his son. Adam’s ability to be vocal retreats until his cry of desperation is locked entirely within himself. By muting its own voice, A Screaming Man perfectly reflects the heartbreaking desolation of its hero.