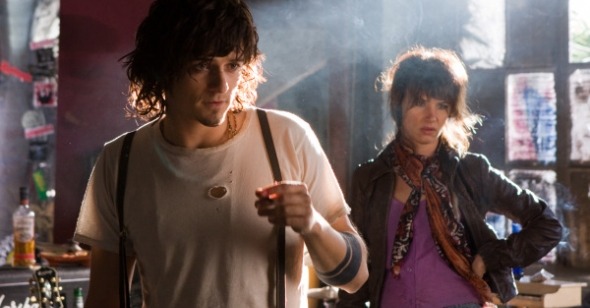 Ladies and Gentlemen, the Not-So-Fabulous Stain
by Justin Stewart

God works in mysterious ways. That‚Äôs the lesson that Mark Ruffalo got behind a camera for the first time to deliver. It might not seem so at first, but the actor‚Äôs directorial debut, a ‚Äúlabor of love‚Äù that he says took him ten years to make, hides a soft, spiritual heart underneath its edgy fa√ßade of bearded homeless angst and scummy ‚Äúthrash rock.‚Äù Its hero has a mystical healing grip that he must learn to accept, but since he‚Äôs acknowledged by a priest friend as God‚Äôs conduit, he‚Äôs the anti-Paul (that already forgotten, Seth Rogen‚Äìvoiced, smugly atheist alien who could also cure with a touch). The Catholic-raised Ruffalo and screenwriter-star Christopher Thornton can‚Äôt be faulted simply for wanting to create another Christ allegory for our times, but almost all of the choices they‚Äôve made in going about it are baffling. Hinging on an uneasily swallowed supernatural gimmick, and full of out-of-touch rock band clich√©s, Sympathy for Delicious begs the question: is it all a joke? It even ends with the Bee Gees‚Äô ‚ÄúI Started a Joke.‚Äù Ultimately, no‚Äîthough there are stabs at comedy, the movie, in all its incoherence and absurdity, comes from an earnest place.

The ‚ÄúDelicious‚Äù of that grotesquely awkward title is Dean O‚ÄôDwyer, a paraplegic Angeleno living out of his car who DJs under the name Delicious D. Thornton, himself wheelchair-bound with a broken back, plays D as a mostly unlikable cauldron of resentment and self-pity. He has reasons to be surly. Before his motorcycle accident, he was a hot talent making a name for himself in the club scene. Now, wheeling onstage for a set one night, he complains that the table is too high, only to be insulted and ejected by a callous club stooge. Though his hateful churlishness (a defense mechanism) might rightfully earn him his isolation, a large-hearted priest (Ruffalo), who feeds D and the other lost souls that inhabit their particular skid row near some godforsaken L.A. underpass, compassionately suggests faith healing. D scoffs, but he starts to take faith more seriously when he learns that he has the power to heal invalids with an extended, concentrated touch. This makes him ghetto-popular (the small slum division boasts a dazzling variety of disabilities and illnesses), and Father Joe spies an irresistible opportunity to bring money to his mission. But there‚Äôs a caveat that ruins the miracle for Dean: he can‚Äôt heal himself.

Between homeless-healings, D is also reentering the music world. Rocker Ariel (Juliette Lewis) knows his talent, and she invites him to try out with her band‚Äîplease wait for it‚ÄîBurnt the Diphthongs. It is during all of the band scenes that Ruffalo‚Äôs film‚Äîagain, unless it‚Äôs really all a joke‚Äîturns alarmingly tone-deaf. First of all, their music (sub-Orgy mid-90s industro-grunge) is terrible, an objective fact that goes unacknowledged. And there‚Äôs the casting. As the contemptuous and confrontational lead singer who spouts pretentious edicts (‚ÄúWe‚Äôre anti-melody‚Äù; ‚ÄúTitillate the masses‚Äù) as laughable as his stage name (The Stain), Ruffalo has cast Orlando Bloom, an actor who, as far as I know, has never made anyone laugh. He‚Äôs been Legolas and Will Turner, but as this more mundane ‚Äúbadass,‚Äù the English actor is neither intimidating nor amusing‚Äîhis overdone caricaturing is wrong for the movie. Also wrong: a coasting Laura Linney as the band manager who takes offense to D‚Äôs rudeness. Her heavy eye shadow is a clever touch‚Äîa lame attempt to blend into a young person‚Äôs world‚Äîbut the character is superfluous.

His record-scraping adds another appropriately discordant texture to the band‚Äôs sound, but D is dismissed, until he recklessly burns, then cures, one of the members. The Stain sees dollar signs, and Burnt the Diphthongs embark on ‚ÄúHealapalooza,‚Äù a string of evangelical circuslike shows during which D heals audience members while the band blares on. D, who felt used by Father Joe, is all too happy to cynically capitalize on his unasked-for gift, and he finally lets it go to his ego. Visually, this means turning into a sedentary Dave Navarro, all fishnet, eyeliner, and a thick coating of douchiness. In Ruffalo and Thornton‚Äôs moralistic world, this selling out cannot pay, and D‚Äôs rise dutifully devolves into spiritual decay, hilariously rendered as a 1930s-esque cautionary exploitation-style montage of pot, pills, puking, and tits. It‚Äôs a prick‚Äôs comeuppance, as D slowly, painfully learns that it is not his legs that need healing at all, but his skeptical, self-centered attitude.

Ruffalo simply can‚Äôt contain his movie, which has a self-destructive mind of its own. Gone rogue about forty minutes in, Sympathy for Delicious is lost well before its third act even resorts to courtroom scenes. There‚Äôs a howler when Father Joe is asked if D is really a healer. ‚ÄúGod is the only healer,‚Äù he says. The prosecuting attorney: ‚ÄúObjection‚Äî speculation!‚Äù The literally drive-by Los Angeles photography is forever shaky‚ÄîRuffalo‚Äôs substitute for a style‚Äîand he favors harsh orange filters for the exteriors and grubby, underlit interiors. On the soundtrack, Canadian bands Do Make Say Think and The Besnard Lakes provide moody-ambient relief from the Stain and company‚Äôs noise, but there‚Äôs no respite from the narrative jumble. These might just be Ruffalo‚Äôs growing pains, but he, Thornton, and Delicious D clearly lost the map somewhere along this spiritual quest.