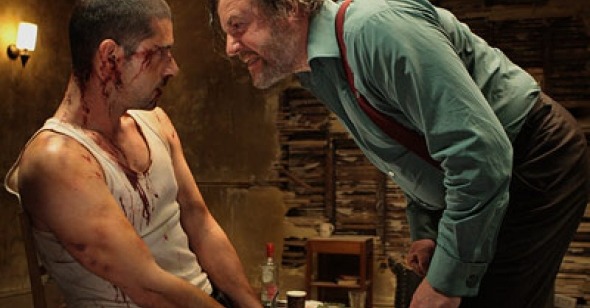 About three quarters of the way through 44 Inch Chest, a battered and bloodied Melvil Poupaud, sitting handcuffed in a chair, looks at the camera for the first time. The expression on the art-house heartthrob‚Äôs face betrays fear, bewilderment, and possibly a tinge of regret. It's almost as if he's thinking: ‚ÄúI was in Rohmer's Conte d'√©t√©, I was in Desplechin's Un Conte de No√ęl, now I've got a wordless part, tied to a chair, in Un Cunt de Londres . . .‚ÄĚ

In truth, so overused is the "c" profanity in 44 Inch Chest that its power is fractionally distilled to trace levels within the first reel‚ÄĒand this, coming from a movie whose greatest selling point according to the UK poster is that it is "from the writers of Sexy Beast." While it‚Äôs encouraging that the stock of screenwriters has risen to the point of providing taglines for movie posters, I seem to recall that in Jonathan Glazer's seductive gangster elegy (almost ten years ago, now), Don Logan (Ben Kingsley) first uttered the c-word on his belated entrance in reel two, a perfectly pitched moment which invoked menacing disquiet and nervous laughter: ‚ÄúGotta change my shirt, I‚Äôm sweating like a c***.‚ÄĚ As the marketers are so desperate to cash in on 44 Inch Chest‚Äôs superior stable mate (this completes a writers‚Äô trilogy for David Scinto and Louis Mellis, with Sexy Beast and 2000‚Äôs Gangster No.1, but their collaboration has since ended in acrimony), they presumably won't object if we make the relevant comparisons.

Like Sexy Beast, 44 Inch Chest features a show-grabbing central performance from Ray Winstone, a bearlike actor in the physical mold of Oliver Reed, presumably unfulfilled by his recent mundane roles for Spielberg (Indiana Jones and the Kingdom of the Crystal Skull) and Scorsese (The Departed) and just aching to sink his teeth into some scenery again. Winstone is back on his familiar ‚Äúpatch‚ÄĚ in the East End of London (the place of his birth and the setting of his career-defining turn in the Gary Oldman‚Äďdirected Cannes winner Nil by Mouth). He plays Colin Diamond, a ‚Äúdiamond geezer,‚ÄĚ but a cuckold, whose eclectic gang of shady friends kidnap the French waiter (Poupaud) who‚Äôs been interfering with Colin's wife (Joanne Whalley, who deserves a medal for valor for agreeing to appear), and deliver him trussed up, to an East End lock-up for Colin to ‚Äúdo the honors.‚ÄĚ The remainder of the film is played out in this location, as we wait, supposedly in a state of breathless suspense, to behold the magnitude of Colin's terrible retribution. To say that the film looks and feels like a stage play at times is not automatically in its disfavor. After all, 44 Inch Chest contains elements of both Pinter‚Äôs The Homecoming and Who‚Äôs Afraid of Virginia Woolf?. And isn't Reservoir Dogs set almost entirely in an abandoned warehouse with a man sat bleeding and tied to a chair in the middle of it? Well, if they will create these comparisons...

The insalubrious supporting characters of 44 Inch Chest are all introduced immediately and with a minimum of fuss. Colin's friend Archie (Tom Wilkinson) lives with his mum. Meredith (Ian McShane) is gay and likes the high life. Old Man Peanut (John Hurt) is a psychotic septuagenarian. All of them say the c-word a lot. We start the film firmly in the territory of Guy Ritchie‚ÄĒsomewhere Sexy Beast, with its more naturalistic dialogue, never ventured‚ÄĒor worse, the plethora of Guy Ritchie ‚Äúinfluenced‚ÄĚ films like Rancid Aluminium (2000) and Love, Honour and Obey (2000). Despite spending the rest of the film with these people, we never learn, or need to learn, anything more about them‚ÄĒwe never really want to, either.

The film thankfully moves away from these unsavory associations, not just in its single location concept but also in its casting. Rarely outside of the seventies disaster movies of Irwin Allen has such a high caliber cast been assembled to play characters as insubstantial as these‚ÄĒand it shows in the performances. Wilkinson is miscast as a cockney mummy‚Äôs boy and doesn't convince; McShane offers what amounts to little more than a gay parody of his role in Sexy Beast; Hurt is entertaining as the toxic pensioner, but struggles throughout with a set of false dentures. The only character who retains any genuine menace or mystery is Mal (played suavely by Shakespearean Stephen Dillane) about whom we know very little (his own intro may have been cut for length), but eventually suspect much. This group of friends, eclectic beyond belief, provide the trimmings of the film, the one-liners, the banter and the witty monologues which are almost suffused with real meaning, but the meat of the film is spent with Winstone, facing off against a silent, baffled Poupaud. The thought briefly flickers that they may have got the wrong victim . . . but then soon subsides, together with any prospect of a genuine plot progression of this kind.

Winstone gives it everything, blood, tears, considerable quantities of spittle, a bravura performance worthy of Lear, or possibly Macbeth‚ÄĒbut in the service of what? What sort of person are we being invited to spend this time with, other than someone so deluded and self-absorbed that he can throw his wife through a plate glass window but claim with a straight face that his problem is that he ‚Äúloved her too much‚ÄĚ? In so far as Diamond resembles someone real, his problem is obvious: he is a spoiled child trapped in a violent abusive man's body‚ÄĒhis lengthy, facile speeches about the nature of love and marriage sound like counselling for cons.

For a film sold so strongly on the writing, the script is stylistically all over the place. One moment, we have deliberately theatrical dialogue (almost a Pinter pastiche) in a scene where the gang taunt Poupaud about what sexual techniques he might have used on Colin's wife; in another, pure Tarantino, Old Man Peanut struggles to help us make sense of the world by alluding to a terrible movie, in this case Samson and Delilah with Victor Mature and Hedy Lamarr, whilst relevant excerpts play over his misogynistic monologue (‚Äúall of this . . . for a woman‚ÄĚ). In a further, stronger sequence, nicely shot with shadowed backgrounds in the style of Bu√Īuel's The Discreet Charm of the Bourgeoisie, Colin ‚Äúsees‚ÄĚ his wife as an apparition in the lock-up, with his friends. All of these moments are designed to allow the film to escape, ingeniously, from the confines of its single location, and while they do keep the attention and deliver on one level (laughs and/or curiosity), the overall effect is one of incoherence, not illumination. Unlike with Tarantino‚Äôs greatest stylistic excesses (Kill Bill Part 1, Inglourious Basterds/), there are no aesthetic connecting threads between the mishmash of styles and influences, which exist only in the service of themselves.

In one dream sequence, the spotlight appears to fall on Mal, but this turns out to be a figment of Colin‚Äôs paranoia. So, where Reservoir Dogs plays heavily on the myriad tensions (the literal and metaphorical standoffs) between the characters in the room, no such narrative tension properly exists here. Instead of caring about the outcome of the only available plot development (will he kill him?) we lose interest early on, like Nice Guy Eddie, baffled as to what the fuss is about.

In the single sequence that clinches the failure of 44 Inch Chest, Winstone ‚Äúimagines‚ÄĚ himself and Poupaud away from the lock-up and in the marital bedroom, where Winstone caresses his wife's undergarments and reads from his marriage certificate. It is a scene of such imbecility that the audience would laugh out loud if not for the accompanying suffusion of sheer tedium. Winstone's character in Sexy Beast, Gal, was genuinely tired of life: there was mystery and complexity about Gal, the audience queried his emotions as he struggled with the prospect of another ‚Äújob‚ÄĚ under pressure from Logan‚ÄĒjust what had he gone through, exactly, to want to leave it all behind so badly and to go to such lengths to escape? Colin Diamond is, by contrast, a cipher having a lengthy nervous breakdown.

By film‚Äôs end we‚Äôre clearly supposed to have learned something. But neither the characters, nor the audience, have learned anything. At least a Hollywood film with nothing to say might have finished with an explosion.