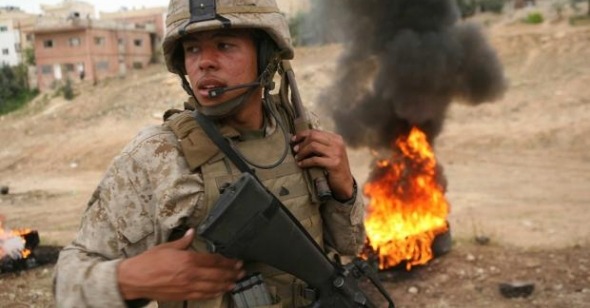 During the sixteen years of the Vietnam War few films, and certainly no significant ones, depicted the conflict, while in the five years of the Iraq War (nearly seven in the “war against terror”) a veritable glut of movies, most of them unhesitatingly against the American occupation, have dealt directly with the catastrophic events taking place in the Middle East. What accounts for this disproportion? Certainly the changed landscape of film production has played a role: whereas it took a massive production and the supervision of the United States military to get John Wayne’s reviled The Green Berets onto screens in 1968, films like Redacted, Stop-Loss, and now Nick Broomfield’s Battle for Haditha are being made on relatively modest budgets by small film divisions or outside the majors altogether. Also gone are the days of elaborately orchestrated antiwar epics like Apocalypse Now, Platoon, and Full Metal Jacket—refusing ex post facto reflection, both Hollywood and the independents are churning out economical dramas not of glossy, backward-looking historical import, but raw, nearly up-to-the-minute topicality.

There are pros and cons to this trend. The scaled-down war movies of today offer models of filmmaking opposed to bloated productions of previous eras, even the supposed heyday of post-Vietnam soul-searching. Yet a sad truth remains: to judge by box-office numbers and that vague barometer called the national zeitgeist, audiences don’t care. Whether this is due to the quality of the movies themselves (and having seen Home of the Brave and Rendition, I wonder), cultural apathy and fatigue, or media oversaturation is difficult to guess at.

The third possibility, however, seems to provide the most interesting line of inquiry into what’s currently going on. The mainstream media, especially that of television, has largely failed the public in providing legitimate question-raising journalism since Operation Enduring Freedom (a result of corporate and governmental collusion detailed extensively in the terrific recent documentary War Made Easy), and alternative media outlets have had to pick up the slack. While Americans have often been shielded from the whole story, during the Vietnam War disturbing images were beamed into homes on a regular basis; the relative absence of such images coming from the major networks and other media now means that the movies have to manufacture their own, concurrent with the real war.

The further from Hollywood the more potent those images are. In the Valley of Elah—a staid, often self-important and clumsy Hollywood drama about the repercussions of the Iraq War at home—has as a recurring visual motif the downloaded images from a soldier’s camera-phone. These images hint at a tragic event, but it’s a mark of Elah’s reticence to depict wartime brutality that the film shies away from ever really showing it. Redacted and Battle for Haditha, on the other hand, represent American military atrocities in an unprecedented manner—unprecedented not in intensity or graphicness, but in representing them so unequivocally even as the war rages on.

Battle for Haditha has already been compared to Redacted. Both films have as their focal point horrible acts of violence committed by American soldiers (and “based on true events”) that are then covered up or bureaucratically justified by military authorities. But where Brian De Palma half-successfully uses that focal point to gauge the war’s representation across various media, Broomfield—best known for his Michael Moore-esque “stalkumentaries” in which he takes center stage while investigating tabloid fodder (Heidi Fleiss, Aileen Wuornos, Biggie and Tupac)—combines documentary-style shooting with improvisational fictional filmmaking techniques in order to approximate on-the-ground confusion. Broomfield’s method makes Battle the more convincing drama. Working with nonprofessional actors, he elicits good performances from his cast, something De Palma wasn’t able to do with his stage actors in Redacted, even when he tried to harness their inabilities into a sort of B-movie alienation effect. The important difference lies in the reductive Southern psychopaths De Palma pawns off as his villains and the young, impoverished, and naïve men—more like grown boys—Broomfield shows as unwitting participants of a game they don’t fully understand. De Palma’s characterizations are hard to take seriously—he’s in effect saying that the mentally unbalanced seek out the military to find an outlet for their cruelty, not that the military more frequently engineers traumatized, morally corrupted order-followers—while Broomfield’s collaboration with former marines lends the film a sober authenticity to an American soldier’s grunt life in Iraq.

The film opens with soldiers being interviewed about their experiences. “What do you want to know?” one asks. It’s a rhetorical question. Over the course of Battle for Haditha we learn that Iraq is the asshole of the world; that one fights no longer for any ideals but for one’s own day-to-day survival; that a soldier becomes hardened and numb to the destruction he’s caused; that “they don’t like us.” Not exactly revelatory information, but the way in which it comes through in onscreen behavior makes Battle for Haditha feel original. It’s a challenge to freshly portray the juvenile antics and amped-up paranoia of foreign occupiers, and there’s an unsettling poignancy to Broomfield’s set pieces, whether they consist of a pair of Humvees racing through the desert to metal madness or a shared high-five after a sniper kill, obnoxious, callous acts accompanying the release of frustration and fear built up during periods of on-edge boredom.

Trained to exact immediate vengeance and denied psychological counseling until after tour of duty, Battle for Haditha’s soldiers, led by the tough but conscience-stricken Corporal Ramirez (Elliot Ruiz), get attacked by a roadside mine placed by an insurgent (Falah Abraheem Flayeh) and retaliate against surrounding homes, killing virtually everything in sight including dozens of civilians, many of them children. The insurgent, Ahmad, is a disenfranchised nationalist, once part of the now dismantled army, and not a religious fanatic, but can only accomplish his deed with the help of Al Qaeda operatives. In the end, when Ahmad sees what the IED has wrought upon his fellow Iraqis, he expresses grief and then dismay that his contact, a manipulative Sheik who leads angry young men into jihad, “will be worse than Saddam.”

As in Rendition and Lions for Lambs, this kind of bullet-point dialogue and scenario weighs Battle for Haditha down. The film’s military scenes convey lived-in brutalism and vulnerability, but its Iraqis come across as purely instructive devices, especially couple Hiba (Yasmine Hanani) and Rashied (Duraid A. Ghaieb), who exist merely to be caught between the insurgents, who they cannot rat out, and the Americans, who will kill at the slightest provocation. We see Hiba and Rashied snuggling, showering, and longing to escape their plight in tacked-on moments of “humanity” contrasted with the madness occurring around them. They’re the most telling of Broomfield’s creations in their one-dimensional roles as collateral damage, disposable to both Americans and terrorists in Iraq’s vicious circle of carnage. If the marines are the maximum that can be accomplished in a spontaneous issue film such as Battle for Haditha, then the civilians are the minimum.

The reenactments of the U.S.’s current scorched earth policy in Iraq and the attendant damage caused to its agents stand out—Ruiz is certainly heartbreaking to watch in the nervous breakdown aftermath—but what distinguishes Battle for Haditha from other recent films about the war on terror? Its intimate immediacy seems to be the next effective step in current war films bringing headlines to emotional life, filling in the image-gaps that should have been supplied with content by the American news media. Yet I’m not sure it entirely escapes the superficiality of other small, topically similar films, and altogether these efforts form a sort of collective checklist—Home of the Brave (post-traumatic stress syndrome), Rendition (outsourced torture), Stop-Loss (redeployment), etc.—substituting for the bombastic, overarching mythmaking Academy Award contenders of twenty years ago. To its credit, Battle for Haditha balances multiple perspectives, effectively demonstrates how torn are the motivations of individuals caught in the machinery of war, and in the process admirably attempts to flesh out its schematics with an organically constructed realism. But schematic it ultimately remains despite those attempts, a dramatic diagram underlining two or three ideas to the detriment of a more elucidating context. Whether that’s the result of Broomfield’s shortcomings as a director or the result of his scaled-down war film’s demand for instant relevancy is just one more question at a time when so many previous paradigms, historical and cinematic alike, have become insufficient for explaining our reality.