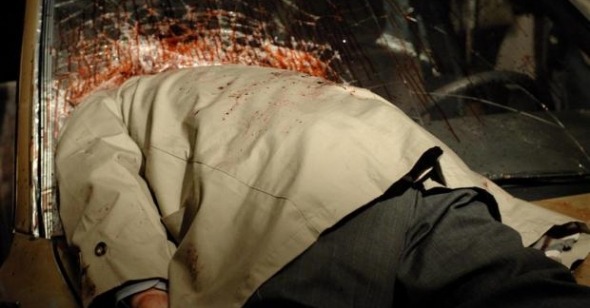 If you've ever yearned to watch (as well as hear and practically feel) Academy Award nominee Stephen Rea writhe gorily in windshield glass for the better part of 85 minutes, Stuck is your movie. From go, the key word is unpleasantness. A shabby opening credits sequence scored to generic, dime-bin rap gives way to an incontinent patient at a senior home evacuating his bowels in bed before receiving a hosing in the shower. This glimpse of man at his most physically debased and undignified is a prelude to the story's look at equivalent moral putrefaction, humankind's potential for a state of zero empathy. To find this heart of squalor, writer John Strysik and co-writer/director Stuart Gordon reached, like so many idea-starved creators before them, to the tabloids, and a story from seven years back about a woman in Texas who hit a homeless man with her car, lodging him in the windshield. He did not immediately die, but she panicked. Instead of finding him help she left him stuck there in her garage for days.

Both Law & Order and CSI already “ripped” the story from the headlines, and it's a wonder that anyone felt that this nasty News of the Weird curio deserved the feature film treatment. But there it is, onscreen, brought to you by the director of Re-Animator, with a cast led by Mena Suvari in cornrows. Both are able to bring a remarkable amount of conviction to this tawdriness; it's pitched high and loud, and hits with an intense visceral impact. A final showdown in the garage shocks and appalls in its Takashi Miike-like ante-upping, including but not limited to burning flesh, pens jabbed in eyeballs, and a dog chewing on festering human wounds. I often found it impossible to look directly at the screen, and squirmed across three seats with yogic limberness trying to avoid the images.

Unlike Miike, Gordon has never felt fully sadistic. Both seem to have fun with their torture, but within the universe of Gordon movies like From Beyond, Dolls, and the also-bloody David Mamet riff Edmond there’s never the feeling that wanton cruelty is being condoned. Like her real-life counterpart Chante Mallard, Suvari's Brandi is brought to justice (although not in the same manner, thankfully for Mallard). Michael Haneke or the David Fincher of Seven might have let her skate to authoritatively "assure" us that evil triumphs, there is no punishment for man's inhumanity to man, and that of course we are all Brandi in our own way. Stuck's revengeful flip of this sad worldview might not be terribly less simple, but like William Macy's prison pillow talks at the end of Edmond, at least it's something other than echoing nothingness.

Complicit in Brandi's crime is her drug-dealing blowhard boyfriend Rashid (Russell Hornsby). He's shocked when she first tells him that she hit a guy, but laughs when she tells him he was pushing a shopping cart and is probably homeless (he's somewhat shocked again to learn that the man is in the garage). “Anybody can do anything to anyone and get away with it,” he declares. “Look who's in the White House right now.” It's about as subtle as Michael Moore, but the clear fact that neither Mallard nor Brandi do in fact get away with it refutes the movie's belief in that kind of anarchic declaration. That Brandi is able to hide her secret for so long keeps the point in play, though. (The tenuous associations to Bush-Cheney are too facile to deserve consideration.)

The best line in the movie is a screamed, "Why are you doing this to me!?" Best because it's delivered by Brandi to Rea's Tom Bardo, the man in her windshield who simply refuses to die. (He's the stubbornest victim this side of Wolfgang Kieling in Torn Curtain). The audience's sympathy for Brandi probably checked out when she chose to drink some more and fuck Rashid while Tom moaned in the garage on the night of the accident, but you still know where she's coming from. You want Tom to stop suffering. Dying would solve that, and also alleviate the panic that plagues Brandi and by proxy, the audience. His resilience is so extraordinary, so not "the way things are supposed to happen," that it is not entirely absurd that Brandi reacts with a victim's umbrage. Suvari can't make her character sympathetic, but she gets the petulant impatience just right. Rea is passable in his definition of a thankless role. It might seem like slumming if you only know him from Neil Jordan movies, but this is the Royal Shakespeare Company for those who remember his timecard-punching work in The Reaping or his mincing “evil genius” doctor from Feardotcom (giggle).

By the end, Stuck has become something more than its fecal beginnings presaged. It's never a picnic to look at (but then neither are tabloids), and a lisping gay stereotype neighbor (dog's name: Princess) is most unfortunate. But it's not hard to get high on its gamy fumes. It may not be the idea movie that Gordon and Strysik think it is, as evidenced by press-conference statements, but the notions it attempts to get across (the homeless are hopelessly marginalized, misdeeds matter) come from a good place. Like tiny bits of glass in flesh, Stuck stays with you.