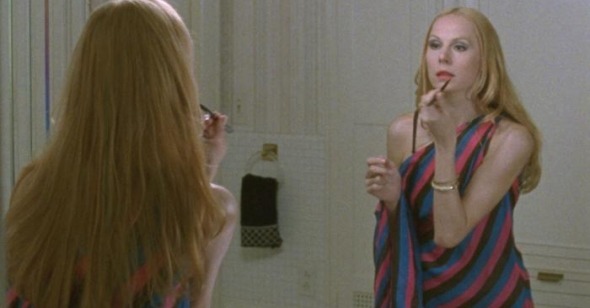 A Lack of Color
By Chris Wisniewski

If the day ever comes when the cinema of Ira Sachs warrants book-sized treatment, one might imagine the book‚Äôs title to be something along the lines of ‚ÄúOn the Outskirts of Memphis: A Cinema of Otherness.‚ÄĚ Sachs‚Äôs uneven second film, Forty Shades of Blue, won him the Grand Jury prize at last year‚Äôs Sundance film festival, and with his exceptional debut, The Delta, it shares a studied, reserved style and a preoccupation with marginal figures who could never quite belong in the world of Memphis, Tennessee. After all, Sachs‚Äôs Memphis is an uninviting place: it‚Äôs a provincial world packed with regional flare and a bustling local culture, but it‚Äôs rather unwelcoming to those marked by difference‚ÄĒracial, ethnic, sexual, or otherwise. In The Delta, the color of John‚Äôs (Thang Chan) skin, not to mention his preference for boys, keeps him on the outside; in Forty Shades, it‚Äôs Laura‚Äôs (Dina Korzun) wardrobe, bathed in Euro-trashy brights, that suggests her isolation and otherness. With just two features under his belt, Sachs has already honed a distinctive and consistent style and point-of-view, for better and for worse.

Forty Shades begins with a celebration in honor of Alan James (Rip Torn), a legendary local music producer with a live-in Russian girlfriend, Laura. Alan decides to cap the festivities with a little infidelity, and Laura, who is 30 years his junior and the mother of his three year-old son, responds with extreme inebriation. The night ends with Alan‚Äôs grown son Michael (Darren E. Burrows) observing Laura in her compromised and compromising state. Michael has returned home for the first time in years‚ÄĒapparently, Alan is an even worse father than he is a boyfriend‚ÄĒand decides to take the resentment he has towards his father out on Laura (at least she‚Äôs around). Laura, though, proves too beautiful and decent for that to work for very long. Instead, a fond and tender relationship develops between the two of them, as they find in each other the affection lacking elsewhere. Slowly, Michael reveals his real reasons for coming home and his dissatisfaction with his marriage, as Laura shares the loneliness and disappointment that come with having more than she ever dreamed possible in Russia but less than she needs to be happy.

Sachs is the sort of filmmaker whose greatest weaknesses walk hand-in-hand with his clearest strengths. He has an admirably slow, descriptive visual style; he doesn‚Äôt seem to like unmotivated cutting, and he often resists easy close-ups in favor of more compelling longer shots. So it feels more like a fault of the screenplay, co-scripted by Sachs and Michael Rohatyn, that the film‚Äôs subsequent developments seem obvious, even as character motivation proves rather murky and muddled. Forty Shades takes its sweet time getting to where it‚Äôs clearly headed, and some of its more emotionally explosive scenes, including a fistfight in a bar and Michael‚Äôs final fuck-you toast to his father, come off as fairly contrived.

Since Forty Shades of Blue is essentially a melodrama-cum-woman‚Äôs picture, its success ultimately hinges far less on effective narrative than it does on raw emotion. In that regard, Sachs relies heavily on his actors. Korzun, in her first American film, confidently occupies the film‚Äôs emotional center, gracefully matching Sachs‚Äôs quiet pacing beat for beat. Early on, Michael confronts her about her drunken night after the award ceremony, and she wordlessly projects Laura‚Äôs natural defensiveness, isolation, and embarrassment. In a later lovemaking scene with Torn, Sachs‚Äôs relentlessly stationary camera fixes on her as she breaks from the desperately mundane routine of penetration with an emotional outburst that‚Äôs covered by the thinnest of white lies. Korzun is often riveting; she demonstrates what an intuitive actor can do to fill out Sachs‚Äôs long takes and patient rhythms. Unfortunately, the men here are far less compelling: Burrows‚Äôs startling lack of charisma accentuates the pervasive feeling of leadenness, while Torn, in very Torn-like fashion, seems more content to mug than to act. Whether or not their choices are deliberate‚ÄĒplenty of thematic excuses can be made for Michael to be insufferably dull and his father charismatic but flat‚ÄĒthey lessen the film‚Äôs impact, even as they underscore Laura‚Äôs predicament.

There are so many things about Forty Shades of Blue that don‚Äôt quite work that it‚Äôs easy to forget how much really does, and that‚Äôs a shame. Between this film and The Delta, Sachs has done enough to demonstrate his own prodigious talents behind the camera and the strength of his vision, even if the material he‚Äôs working with here doesn‚Äôt always play to his strengths. Forty Shades of Blue ends beautifully, much as The Delta begins, with a solitary figure wandering the streets of a city that will never be home. Though far from great, the film captures feelings of isolation, lack, and sadness that linger well beyond its startling final freeze frame.