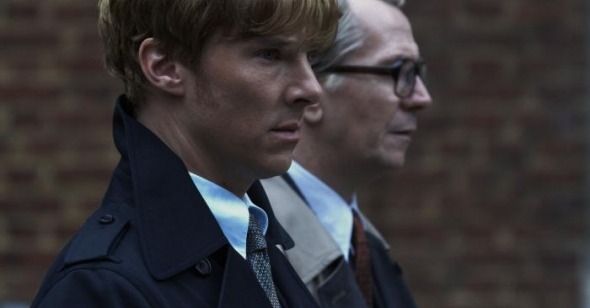 Let the Rat Come In
By Julien Allen

There is a seam of self-deprecation running through British spy films that stretches back to Hitchcock‚Äôs The Lady Vanishes‚ÄĒthat of the comparative dullness and vulnerability of Britain when confronted with a fearsome and organized European menace. This pervading sense of ‚Äúbeing up against it‚ÄĚ‚ÄĒwith Britain as the girl alone in the house, the Nazi monster lurking in her bedroom cupboard‚ÄĒneeded a powerful counter-concept, delivered with gusto in the 1960s by the joyous fantasies of Ian Fleming‚Äôs invincible, irresistible MI6 action man (with a double first from Cambridge, lest we doubt he could qualify as a real spy!). After a decade or so of tuxedoed Sean Connery ordering martinis and cracking heads, the novelist John Le Carr√©, whose own career within the British secret service (which he named the Circus, after the Cambridge Circus offices the real MI6 used to occupy) seemed to be more authentic, if substantially less exciting, than Fleming‚Äôs anecdotes, renewed our acquaintance with the traditional dynamics, via his 1974 bestseller, Tinker Tailor Soldier Spy. The book‚Äôs success was helped along by a game-changing 1979 TV series starring Alec Guinness as veteran intelligence officer George Smiley‚ÄĒan adaptation and a performance so apparently definitive that no further attempts had been made to film the story until now.

Tomas Alfredson‚Äôs film takes the essential elements and characters of Le Carr√©‚Äôs plot and reduces the TV series‚Äô six-hour, sprawling cold war espionage fresco to an exceptionally tight and engrossing detective procedural. It transpires‚ÄĒsoon after Smiley (played here by Gary Oldman, back from the cold after two decades of playing Hollywood bad guys and supporting parts) is forcibly retired along with his boss, Control (John Hurt), following a botched operation in Budapest‚ÄĒthat ‚ÄúKarla‚ÄĚ (Smiley‚Äôs Soviet nemesis) is running a mole at the top of the Circus, something Control had long suspected. So Smiley is sheepishly called back by MI6‚Äôs paymasters at the Foreign Office to smoke him out. After all, who better to spy on spies than a master spy who knows all the suspects and is now above suspicion himself?

Le Carr√©‚Äôs hero is the anti-Bond, the quietest, most soberly intellectual and trustworthy of a somewhat feeble cabal of three-piece tweed-suit-wearing civil servants. Genuine heroes are very thin on the ground at the Circus, something Smiley‚Äôs close colleague Connie (Kathy Burke) picks up on when reminiscing wistfully about World War II‚ÄĒ‚Äúa real war: British men could be proud then.‚ÄĚ The nearest thing to James Bond in Tinker Tailor Soldier Spy is not handsome scalp-hunter Ricky Tarr (Tom Hardy)‚ÄĒwhose travels to Istanbul and Paris consist only of drab apartments, a tragic love affair, and bloody compromise‚ÄĒbut rather the mysterious Karla, who is three steps ahead of the Brits, ruthlessly implacable and even gets in on some of the assassination and torture. As Smiley points out to his political bosses (in one of the very few moments of exasperation he allows himself) Karla really plays the Circus folk for the bickering, second rate fools they are.

The eye is first caught by the powerhouse cast, which is so well stacked that it can afford to give walk-on roles to popular British character actors Roger Lloyd-Pack and Stephen Graham, Theatre de Complicit√© maestro Simon McBurney, and Cannes winner Burke. This gives it the feel of a typical Working Title picture, with its overstuffed, contact-book heft, but the principal actors don‚Äôt disappoint, in particular Mark Strong as the victimized field agent Jim Prideaux, who starts a new life teaching French in a west country boarding school, and Colin Firth, immaculate as the womanizing aesthete Bill Haydon, establishing that he doesn‚Äôt just need Oscar-sized parts to exert command over a role.

Peter Straughan‚Äôs script presents the backdrop of a country on its economic knees and swiftly decorticates the petty funding problems of the Circus and its cripplingly obsessive need to impress its American cousins in the CIA. It also improves our understanding of the characters‚Äô frustration by its fixation on sex. Central to Smiley‚Äôs character is his cuckolding by Haydon, but we also have Ricky Tarr‚Äôs spying on a copulating couple and his doomed affair with a Russian defector; Prideaux‚Äôs unspoken and unfulfilled obsession with Haydon; the habit of Smiley‚Äôs sidekick Peter Guillam (Benedict Cumberbatch) to eye up girls, before he is later revealed as a closet homosexual; and Connie running a boarding house for (fornicating) teenagers (leading to her delectable remark, ‚ÄúI don‚Äôt know about you, George, but I‚Äôm feeling seriously under-fucked‚ÄĚ). Barely ten minutes go by without someone having, talking about, emerging from, watching, or wishing they could have some sort of coitus. This crafty conceit conjures a sense of the sheer impotence of covert power; of men who have agreed to shut themselves away from the outside world and are forbidden the liberating pleasures of genuine companionship‚ÄĒseeing all this, it isn‚Äôt too hard to understand how some might have wondered if the grass wasn‚Äôt a shade greener on the other side of the Berlin Wall. (This emasculation finds its greatest expression in one of the most delectably hideous office parties ever committed to film). Only Ricky Tarr ever vocalizes his desire to escape from the whole cloistered nightmare (‚ÄúI don‚Äôt wanna turn out like you lot‚ÄĚ) and run, far away, with his Russian paramour. You get the feeling that Smiley, despite all the pain the Circus has caused him, could never really leave.

By necessity, Smiley stands apart from the rest, not so much a hero as an observer and judge. When not sleuthing, Oldman‚Äôs Smiley is forever lost in his own painful thoughts, only occasionally snapping out of his inner turmoil to deliver an economical order or a pat observation. He is a man burdened by decades of manners and reserve, pointedly refusing the opportunity he has finally been given to let go and decry the whole rotten system. And herein lies a central problem with the film. The casting of Oldman in the lead role is very deliberately iconic (Smiley says nothing for the first twenty minutes of the film, so that anticipating his first line, ‚ÄúI‚Äôm retired, Oliver,‚ÄĚ is like waiting for Orson Welles to show his face in The Third Man), but his performance is mannered and distracting, suffering badly by comparison with the effortlessness of the likes of Firth, Ciar√°n Hinds, and Toby Jones as the stuffy suspects at the top of the Circus. Oldman‚Äôs performance screams Smiley‚Äôs apparent complexity from the rooftops, rather than implying it; he approaches Smiley as a ‚Äúcharacter‚ÄĚ (something Guinness refused to do) so that at times he overdoes it so much he even slips into his Count Dracula. His aging makeup and hair also give him the unfortunately distracting look of Margaret Thatcher‚Äôs nemesis, ex-European Commission President Jacques Delors.

An example of Oldman‚Äôs ultimate disconnect can be found in a comparison of Smiley‚Äôs heartbreak with that of Guillam‚Äôs: Oldman‚Äôs reaction to first seeing his wife with Bill Haydon is all quivering lips and rolling eyes, whilst Cumberbatch‚Äôs understated breakdown (when things get really heavy, he is forced to dismiss his live-in boyfriend for his protection) is truly moving. There is no denying Oldman‚Äôs talent, but (rather like Olivier, who insisted in Khartoum on pronouncing his character‚Äôs name‚ÄĒthe Mahdi‚ÄĒdifferently to everyone else in the film) his stylistic approach is just too set apart from the rest of the cast. One is reminded how Warren Beatty used to be mildly enervated whilst doing press tours for Dick Tracy, with the recurring question of why he was the only man not to be wearing prosthetics in the film‚ÄĒOldman feels like the only man in Tinker Tailor Soldier Spy who is.

Working Title‚Äôs track record is marked by a strategic deployment of foreign directors to explore landmarks in English culture (Ang Lee for Sense and Sensibility, Shekhar Kapur for Elizabeth) and so it is here with Swedish director Alfredson, who has concentrated and sharpened his modus operandi for Tinker Tailor Soldier Spy. Amidst the Kieslowskian visuals and pace of Let the Right One In, it was easy to overlook Alfredson‚Äôs principal predilection, which is for demonstrative set pieces. A large part of the success of Let the Right One In was in the blending of highly naturalistic lighting, acting and production design with spectacular metaphysical outbursts (the tunnel attack, the spontaneous combustion, the final majestic ballet of death in the municipal pool) and here again, the film is both still and brutal, though the naturalism of Let the Right One In has been replaced by a grimy but seductive seventies period patina (dark greens and browns; Guillam drives a gorgeous Citr√∂en DS 23 IE‚ÄĒon a minor civil servant‚Äôs pay).

The scenes of brutality remove emphasis from the visualization of the perpetrators themselves and call to mind Jean-Pierre Melville‚Äôs method of making killers unremarkable professionals, capable of the unspeakable without undue theatricality‚ÄĒan old-fashioned sensibility fitting the period in which the film is set. At times the calmness accompanying some of the more shocking scenes borders on sadism, the cruelty of the various jugulectomies and eviscerations perpetrated by Karla‚Äôs hoods being cleverly counterbalanced by some of Smiley‚Äôs nonviolent but outrageously unkind interrogation techniques.

The film‚Äôs ending is as technically impressive as anything else, and reinforces the power of the novel, which establishes the reclusive Prideaux as the story‚Äôs emotional heartbeat. Just as Prideaux, horrendously betrayed by the villain of the piece, is banished to the countryside for the film‚Äôs duration, nor do we ever get to see the two most important people in Smiley‚Äôs life (his wife, Anne, and Karla). This uncovering of emotions buried below the cold cynical surface is something the makers of Bond films have more recently strived for but never achieved, largely because the world of Bond could never be real. Alfredson pulls it off; it‚Äôs a piece of smart mainstream filmmaking that should propel him to the top of the Hollywood directors‚Äô wanted list before very long.