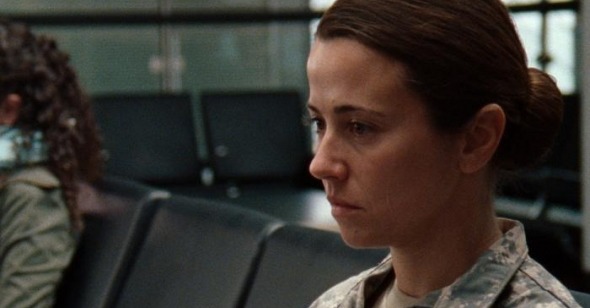 After Effects
By Farihah Zaman

Though Judd Apatow‚Äôs series Freaks and Geeks, which first aired in 1999, has been topping cult-classic, tragedy-it‚Äôs-been-canceled lists for years, one of its stars, the appealing Linda Cardellini, has had little to sink her adult teeth into since she embodied those fruitfully awkward teenage years. Despite the success of the male cast members of the show‚ÄîSeth Rogen gets to play everything from Adam Sandler‚Äôs prot√©g√© to a comic-book hero; Jason Segel stars in a hit sitcom and spearheaded the return of the Muppets; and despite helping to ruin the 2011 Oscars, James Franco continues to be ubiquitously described as ubiquitous‚ÄîCardellini‚Äôs biggest screen roles have been the embarrassing live-action Scooby Doo films and a forgettable bit part in Brokeback Mountain.

The somewhat under-the-radar Return gives Cardellini her first significant dramatic role in her decade-plus career. As Kelli, a soldier recently returned from overseas deployment to her home in rustbelt Ohio, she is convincing and natural. Although Kelli worked in supply detail and saw little active combat, the general experience of being in a war zone leaves her unable to comprehend the return to her former life, ill-equipped to deal with the quotidian responsibilities of a suburban mother, wife, and friend. At first she appears bewildered by the comforts of home, at the now quaint-seeming load of her factory job, at how much her children have grown during her time away. As time goes on, however, her wonder turns to confusion bordering on despair, and Kelli‚Äôs transgressions escalate from being slow to laugh or reluctant to leave the house to abruptly quitting her job and earning a DUI.

Films about the experiences of returning veterans have long been on American screens, from 1946 Oscar-winner The Best Years of Our Lives to 2010‚Äôs The Messenger (one of several recent contributions to the genre), but writer-director Liza Johnson manages a fresh, surprising approach to the subject matter. Not only does Return look at this experience through the eyes of a female soldier (a shocking rarity in both narrative and documentary film), it does so in an unexpectedly low-key, contemplative way. Johnson did her research and spoke to many female vets before penning the script, coming away with the sense that the pressures on these soldiers upon returning were even greater than those on their male counterparts. This is in part because of the deeply entrenched expectations about a woman‚Äôs domestic and maternal duties‚Äîeven Kelli‚Äôs patient, loving husband Mike (the excellent Michael Shannon, underutilized but well suited to the film‚Äôs mood) snaps into a complaint about having to play Mr. Mom‚Äîbut also because of the social taboo many of them recognize about women expressing rage. Kelli, for her part, quietly internalizes feelings of failure, shame, anger, and frustration, giving a meaningful logic to Johnson‚Äôs restrained telling.

Except at a handful of breaking points, Kelli doesn‚Äôt cry or scream. She doesn‚Äôt break down and confess to some terrible crime she committed. She doesn‚Äôt develop a drug problem. She doesn‚Äôt go through the more dramatic and therefore classifiable symptoms of PTSD. Rather, Kelli experiences a fluctuating yet pervasive numbness, one that her friends and family either do not notice, dismiss, or give up trying to address. The title of the film is a bitter irony to its protagonist; to return is to come back to a place one has been before, but the change in Kelli is so profound, rendering her former home so unfamiliar, that she returns to nothing. Rather, she embarks on a dizzying new life that feels like a hollow echo of an old one. As simple an idea as this may be, Johnson‚Äôs execution makes Kelli‚Äôs discomfort and disorientation palpable, from the bleary fluorescence of supermarket displays to the run-down local bar or rusted train tracks flanked by scorched grass and scrap metal. Johnson‚Äôs depiction of economically depressed Ohio is vivid (she hails from such surroundings herself), in spite of the fact that the camera is almost always tightly on Kelli‚Äôs face, narrowing scope in order to register her every muted emotion in a way that her loved ones fail to see.

Return occasionally suffers from the opacity of its narrative style and withdrawn heroine. That the audience is given so little in terms of Kelli‚Äôs background, never privy to her internal monologue, is appropriately poignant when seeing her go about her day, but it‚Äôs perplexing when her anger boils over into fighting matches or irrational decisions. The subtlety of thought conveyed through Cardellini‚Äôs expressions and Johnson‚Äôs anxiously roving camera works best in the minor moments of disconnect Kelli feels just having breakfast with her family or grabbing a beer with her girlfriends. When the action is suddenly decisive or intense, Johnson‚Äôs methods leave a gap between what‚Äôs happening and why it‚Äôs happened.

In some ways the very same factors that set Return apart from other films in the war-veteran genre‚Äî Johnson‚Äôs observational style, near-avoidance of typical plot points, and an uncommunicative, sometimes impenetrable protagonist‚Äîalso leave the film feeling somewhat insubstantial. Johnson could have pushed further in one direction‚Äîthe dramatic or the mundane‚Äîto create a more unified emotional narrative. But then, that lack of tension, the curious space between inner thought and outer action, might have been less compelling than the messier result, less of a tantalizing puzzle for Linda Cardellini to solve